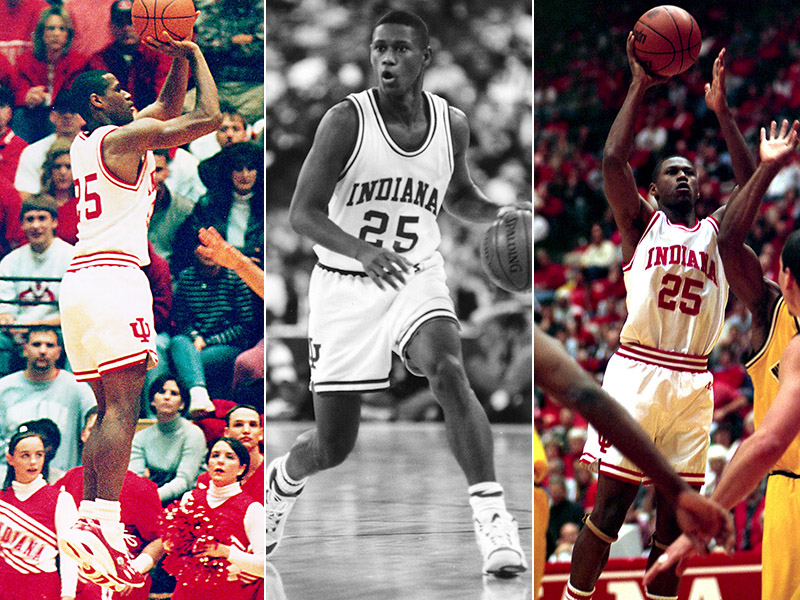 A.J. Guyton compiled quite the career as a four-year starter at Indiana, from 1996-2000. As a freshman, the Peoria, Ill., native won Big Ten Freshman of the Year and was second-team All-Big Ten. As a senior, Guyton was Big Ten Player of the Year (media) and a first-team All-America. Along the way, the guard scored 2,100 points (16.4 career average), the fourth-most in Indiana annals.

I caught up with Guyton, who is retired and coaches his high school alma mater's JV team and the Bloomington (Ill) Flex, of the Premier Basketball League, for an email Q&A.

Read the full Q&A below:

BTN.com: First off, what thoughts do you get when you see the candy stripe pants?
A.J. Guyton: I immediately think tradition and how lucky I was to wear them. It pleases me to see the team still wears candy stripes and they are literally household items now. I hope they remain forever.

BTN.com: Do you own a pair?
Guyton: No, I don't own a pair. I've asked for sometime for game shorts, a No. 25 jersey and candy stripes, but to no avail.

BTN.com: What is the one memory you find yourself going back to when you think about your Indiana career?
Guyton: Missed opportunities to compete for a Big Ten title. Most notably my senior year, which I believe would have gone down as one of Coach Knight's greatest coaching jobs ever. At Minnesota and at Michigan State, we were winning games and couldn't close it out. Those two losses and maybe one other one cost us a shot at a title. In some ways, I believe if we won a Big Ten title Coach Knight would have left on his own terms.

BTN.com: Did you have a favorite Hoosier teammate?
Guyton: My favorite teammate was my former roommate Luke Jimenez. He was extremely humble and focused. He helped me stay grounded and appreciate of being in that position by being so himself. He was always honest with me, never told me what I wanted to hear. I was grateful to have him as a teammate.

BTN.com: Which Indiana teammates do you keep in touch with the most these days?
Guyton: Charlie Miller, Andrae Patterson, Calbert Chaney and Luke Jiminez are the ones I communicate with the most. Not ALL the time but once or twice a month we reach out to one another.

BTN.com: Who was the best Big Ten player you ever faced, and what made him so good?
Guyton: I'd probably have to say (Minnesota's) Bobby Jackson, my freshman year. I looked at him as a guy I wanted to model my game after. Poised, strong and reliable. He had a relentless pursuit of winning, and that's what I admired most about him.

BTN.com: You were there for the end of Bob Knight's tenure – what's your favorite story about the legendary coach?
Guyton: Honestly, I don't remember much. My time at IU was a blur. I tell people that all the time. When I speak to former players, I am constantly reminded of stories, or things that happened. At that point I would remember. Coach Knight is a man every man wishes they could be, but because we worry about what others think, we can't be Coach Knight.

One thing is I had never heard Coach Knight say too many positive things about me as a player to the media. It bothered me a lot. In his books or in public speeches, he would never mention my name. I called him about a year ago just to touch base and say hello. His comment was: "You did a helluva lot for us and we appreciated it." That was the first time I heard him say anything positive about me. It almost brought me to tears, because I always wondered what he really thought of me as a player.

BTN.com: It has to be weird to see Coach Knight in an analyst role? He had to be the last guy you'd think would ever join the media, the dark side, right?
Guyton: I was surprised, and I still am! Maybe he just enjoys being around the game. He speaks about the game the same way he coached us: simple and methodical.

BTN.com: I see you led the Bloomington Flex to a 22-1 record and the Premier Basketball League championship two seasons ago in your first year. What happened in that one game?!?
Guyton: Bad refereeing happened in that one game. Long story. But we lost. We won the championship in 2012 and 2013 and are working on a 3 peat. For those who want to follow, games are televised and broadcast on the radio. You can go to flexbasketball.com for more information.

BTN.com: Do you ever catch yourself preaching the same thing Coach Knight harped on you about?
Guyton: I also coach Junior Varsity at my old high school, and I definitely preach the same things he preached to us. Simple basketball, accountability, understanding who you are and your abilities, making the least amount of mistakes. We also run motion, so I understand the value of having kids who are naturals in the motion offense. Also representing yourself and your family well on and off the court. With the pro game it's quite a bit different, so my imitations of Coach Knight are limited to sideline antics. Now, I truly understand his disdain for some of the referees.

BTN.com: Is the end goal to prove yourself as a coach and one day be on the Indiana bench in some capacity?
Guyton: I do have a dream of being on Indiana's bench one day. It would be the ultimate prize for me as an aspiring coach. I'm also a very patient person and that opportunity would have to be at the right time. Indiana is a special place to play and coach, anybody in his right mind would love to have the opportunity to coach there. My ultimate goal is to be an assistant at the pro level. I possess unique perspectives. I've played on every level in the world. Minor league, grade school, high school, college, Euroleague and the NBA. I'm able to relate to the first and the 12th man. My strength as a coach is teaching players how to work. Through repetition you can achieve comfort in anything. I just love seeing players improve.

BTN.com: Your playing career was cut short by glaucoma. How has that changed your life, and how does it impact you on a daily basis?
Guyton: Glaucoma didn't cut my career short – it happened in my prime. I played four more years after my diagnosis. I was playing well when it happened. It definitely had an impact on my life. I have to monitor my vision, I have to go to the eye doctor every six months to get my eye pressure and vision examined. I'm grateful I'm still able to see the rim and make some jump shots.

I quit playing basketball because I started to play for money. I never wanted to play for money. I played because I truly enjoyed the spirit and competition of the game. Coach Knight took it to a whole new level with the mental aspect of basketball. But I was just a guy who played all the time. I enjoyed my 10 years in the pro game. I played in eight different countries and traveled to 60-plus other countries. I gained a real appreciation for the way basketball is taught in America and the way we live.

BTN.com: You played in the Big Ten, the NBA and had several stops overseas. What makes each special?
Guyton: College basketball is far and away the most fun. Overseas is an extremely overrated experience, unless you find a home in the perfect place. If you're a superstar the fans completely forget about you when you return home from overseas. I won one championship and took two teams to the finals, and when they have reunions or celebrations the Americans who contributed are not invited (lol)!

The NBA is a different animal, but I still preferred the college experience over the NBA experience. The NBA was the best "job" in the world, but if I could go back to a place in my life, it would be my freshman year at Indiana University.

BTN.com: I'll leave you with this: What are your thoughts on Indiana renovating Assembly Hall?
Guyton: I was saddened to hear they are about to "modernize" Assembly Hall, which means the mystique will be gone. It's the link to the ghost of Indiana's past and the fans made it one of the mysterious places to play. It was timeless. I'm blessed to have played during the Knight era. The Hoosiers are in good hands going forward. I'm proud of the teams Tom Crean puts on the floor. Fans continue to support me on Twitter @ajguyton. I look forward to following the Hoosiers all the way through.