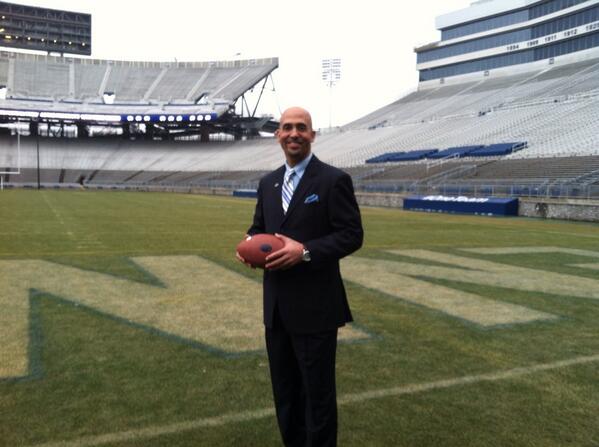 After a nine day coaching search, James Franklin was officially introduced as the head football coach at Penn State today. Franklin, who coached at Vanderbilt from 2011-2013, was introduced to the public in a news conference Saturday afternoon at Beaver Stadium.

With any coaching change comes plenty of reaction from both current and former players, as well as the media. We went to twitter to get some of those reactions, and to no one's surprise, it is a bit of a mixed bag.

Before we get to the top Twitter reactions, here is our popular video of the top moments from Franklin's press conference:

Often overlooked, but a big thanks to Dr. Joyner, President Erickson, and committee for all their hard work during this search. #PSUProud

It doesn't matter how many coaches come and go and how often. Winning is all that matters to players, not loyalty. Hire the best at all cost

Congrats to Coach Franklin on being named our head coach! Can't wait to get back to school and get back to work #WeAre

Welcome aboard Coach Franklin! I'm ready to get back to work #PSUfootball #Grindin

Excited about this one, ready to get back with squad

Throwing my cards on the table I support James Franklin 100% I believe he's the perfect person for the job. Hope he gets it!

(8)Hopefully the ENTIRE Penn State family (Lettermen, alumni, Board, students & fans) will be able to rally around and behind our new coach.

The hiring of James Franklin at Penn State is the best of any school since the season ended. A bold and extraordinary move.

Penn State fans just got a solid first glimpse of Franklin. Extremely confident, some would say cocky, but he backed it up at Vandy.