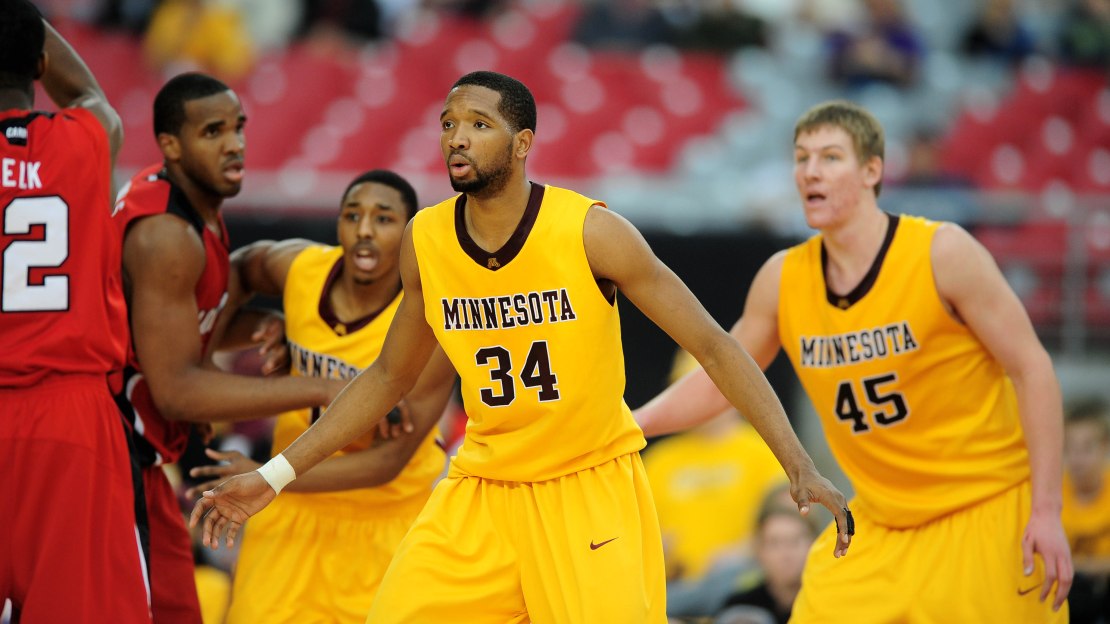 Minnesota product Damian Johnson never averaged double digits in a season – he came painstakingly close as a senior (9.9) – but he didn't need to score to make an impact. The 6-7 forward averaged 4.4 rebounds, 1.7 blocks and 1.8 steals per game in his final three seasons. BTN.com caught up with the former Gopher (2006-2010) who recently signed a deal to play pro ball in Australia.

Read our full email Q&A with Johnson below.

BTN.com: First thing?s first: How much culture shock was there as a Louisiana kid going to play up in frigid Minnesota?
Damian Johnson: I think adjusting to city life was more of a shock for me than the weather. I grew up in a small college town of about 20,000, and Minneapolis has around 300,000 people with a lot of attractions/distractions that a small-town kid can become enamored with.

BTN.com: Who was your favorite Minnesota teammate, and who do you keep in touch with the most these days?
DJ: I don?t necessarily have a favorite teammate, but I was closest to Kevin Payton, Lawrence McKenzie and Brandon Smith because we all came in the same year and bonded immediately. I try to contact most of my teammates I had over my five-year span at least once a year. I usually see them at Gopher events or may randomly text them. I probably talk to Al Nolen the most though. We were roommates my junior year and both live in Minnesota.

BTN.com: If one of your Minnesota teammates is to become a head coach someday, who would it be and why?
DJ: I can see Ryan Saunders becoming a head coach because he has the pedigree, is passionate about the game, and has a high basketball IQ.

BTN.com: What have you been up to since leaving Minnesota?
DJ: My first year out of college, I played overseas in Japan. It was a great cultural experience. The following year, I played in the NBA D League. It was nice getting a chance to play against elite athletes from other colleges that I never got a chance to go up against at the U of M. This past year, I worked at Cargill. I wanted to add work experience to my resume and have a one-year-old daughter who I didn?t want to leave behind and go overseas. But I made a basic agreement and should be signing a contract this weekend to go play in Australia for Mount Gambier Pioneers. It should be a great experience and my family is coming with.

BTN.com: What was the best part of being there for Blake Hoffarber's game-winner at the Big Ten tourney?
DJ: I?ll never forget that shot because we weren?t expected to do anything that season and that shot put us one game away from the Big Ten tourney championship. I also remember how the entire team jumped on Blake and nearly suffocated him.

BTN.com: Was it the best shot you saw while at Minnesota?
DJ: The best shot I have ever seen was (Lawrence) Westbrook vs. Wisconsin. The odds of winning at the Kohl Center are low, and we were down by 16 with four or five minutes left.

BTN.com: What about the best celebration?
DJ: The craziest celebration we had wasn?t even after a win. It was after we lost to Ohio State in the Big Ten Tournament Championship game and found out we got into the dance. We broke a couch in Conseco Fieldhouse and were going crazy like we were fresh off a win.

BTN.com: You played with Rodney Williams for a year - did he ever dunk on you in practice? How about anyone else?
DJ: Rodney never dunked on me when I played with him, but I was smart enough never to jump with him. It?s hard to give a Rodney story of him embarrassing one person at practice because he used to dunk on people all the time if they were dumb enough to stand there or jump. I do remember him dunking on Justin Cobbs bad one day and I laughed every time I looked at him the rest of practice because Justin was so mad.

BTN.com: Who is the best player you went up against in the Big Ten, and what made him so tough to guard?
DJ: It had to be Evan Turner, because he was a good ball-handler with height. Every play was drawn up for him to come off a ball screen, and at Ohio State he got every ticky-tac call.

BTN.com: Tell me something about Tubby Smith, as a coach or a person, that us on the outside of the program didn?t know about him.
DJ: Coach Smith loved that John Legend song ?Give Me The Green Light.? I remember one practice he had it on repeat nonstop and it was at like 7 in the morning, and till this day if I hear that song on Pandora or radio in my car, I change the channel immediately.

BTN.com: You still follow the program closely, so what do you think of Richard Pitino so far and the future at Minnesota?
DJ: Honestly, I think Coach Pitino will have a great future at the U of M. I hope he stays for the long haul. He makes great adjustments, is great with X?s and O?s, his brand of basketball is great, he's not afraid to recruit vs the elite programs, and he is only four or five years older than me, so he can relate to college guys. He is definitely exceeding my expectations right now. I didn?t think this roster had enough to be competitive this season, and now I think we can finish in the top half of the Big Ten.

BTN.com: Be honest here: Can the Gophers compete for the Big Ten and for the nation?s top recruits without improving their facilities?
DJ: I think we can compete for the Big Ten now with our facilities, but I believe a practice facility and renovations to The Barn is a must. The Barn is unique venue, but if any fan doesn?t think that it needs upgrades, they are delusional.  A practice facility is needed because every elite school has one and we have to compete with cheer, dance, women?s basketball and volleyball for gym time. I remember practicing in the Rec multiple times my final two seasons. If we improve those things, I think the U of M would be a lot more attractive to recruits, because the city of Minneapolis is great, the academics and networking opportunities at the U of M are better than most schools, there is an NBA team in the city so scouts and GMs can easily stop by for practices or games, and top recruits can play in an elite conference with every game televised for an up-and-coming coach. That?s an attractive package that elite recruits would have to consider.