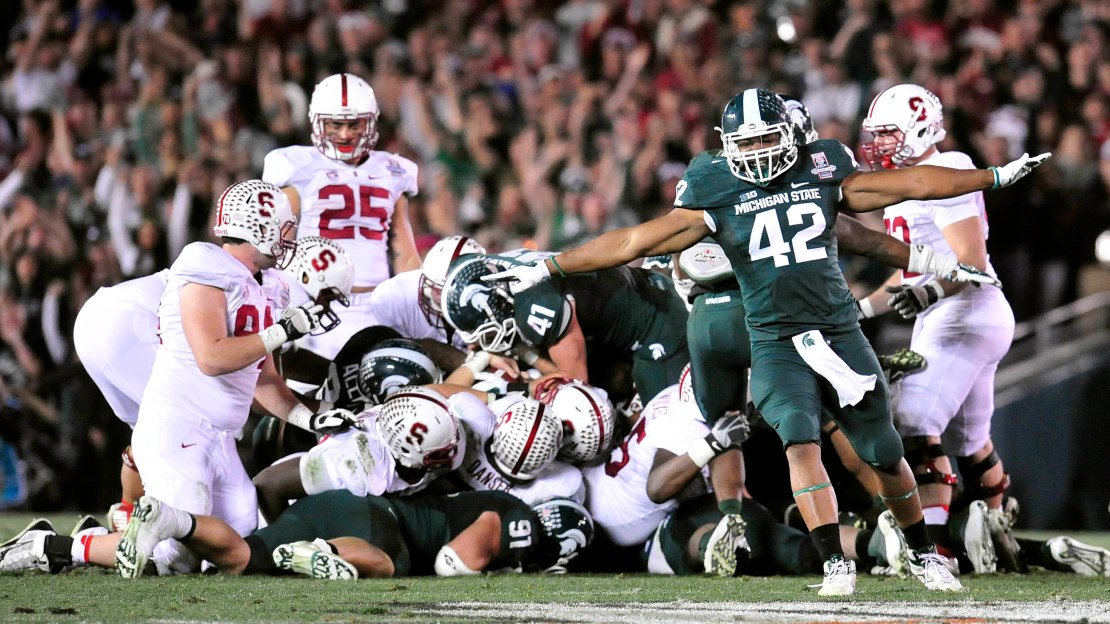 The dust has settled on another disappointing postseason for the Big Ten, which went 2-5 in bowl games. The lone victors: Michigan State in the Rose Bowl and Nebraska in the Gator Bowl. Still, there were many noteworthy things. Here?s my Best of the Big Ten Bowls.

Best game: The Orange Bowl was off-the-charts spectacular. Clemson?s 40-35 win over Ohio State featured four lead changes, over 1,000 combined yards and enough electricity to light the BTN offices in downtown Chicago. The game lived up to its hype as a quarterback-fueled shootout. And, Clemson?s Tajh Boyd outplayed Ohio State?s Braxton Miller, as Boyd hit 77 percent of his passes for 378 yards and five touchdowns while running for 127 yards and a score. Boyd looked like a Heisman winner. Miller got banged around and was ineffective as a runner with 35 yards on 18 carries. Over its last three games, OSU allowed a combined 115 points and 1,617 yards as the Buckeyes now have a two-game losing skid after winning 24 in a row.

Best ending: Let?s go with Minnesota?s 21-17 loss to Syracuse in the Texas Bowl. It got off to a slow start, with the Orange leading 7-3 at halftime and 14-3 after three quarters. But, things heated up in the fourth quarter with 21 combined points and a fun finish. The Golden Gophers battled back to take a 17-14 lead with under two minutes to go. But Minnesota allowed a 70-yard punt return shortly after it tallied the go-ahead TD. Syracuse proceeded to notch a touchdown to win the game, hanging on after Minnesota wideout Drew Wolitarsky let a potential game-winning touchdown catch slip through his hands from 39 yards out in the dying moments.

Best win: Let?s go with Michigan State?s triumph over Stanford in the 100th Rose Bowl Game. The Spartans entered the game as an underdog-but they left as clearly the better team. The Cardinal took the opening kickoff and scored a TD. After the first quarter, Stanford basically was shut down by MSU?s stellar defense in a 24-20 victory. It was MSU?s first trip to Pasadena in 26 years, and it was just the Big Ten?s second win in its last 11 Rose Bowls.

Best catch: Nebraska fans never will forget the 99-yard touchdown hook up between Tommy Armstrong Jr., and Quincy Enunwa in the third quarter of the Gator Bowl. It was the longest touchdown catch in bowl history. Enunwa finished the season with a school single-season record 12 touchdown catches.

Best gaffe: Iowa safety John Lowdermilk is the runaway winner here. He picked off a LSU pass in the third quarter and was racing toward pay dirt. But, he inexplicably dropped the ball before crossing the goal line, thinking he already was in the end zone. Big mistake. Lucky for him, the Hawkeyes eventually scored.

Best stat: The 250 combined rushing yards for Wisconsin backs Melvin Gordon (143) and James White (107), which gave the Badgers the first tandem of 1,400-yard rushers in FBS history. Alas, it wasn?t enough in a 34-24 loss to South Carolina, as Gamecocks quarterback Connor Shaw hit 88 percent of his passes (22-of-25) for 312 yards and three TDs and was responsible for five touchdowns all together. The Badgers made Shaw look like Dan Marino. So, if you are scoring in Madison, Wisconsin allowed an aggregate 65 points and 651 passing yards in losses to Penn State and South Carolina.

Best return: Wisconsin?s Kenzel Doe looked spectacular racing by South Carolina defenders on the way to a 91-yard kickoff return in the fourth quarter of the Capital One Bowl. Special mention to Iowa?s Jordan Cotton, who ran 96 yards with a fourth-quarter kickoff to setup the Hawkeyes? last touchdown.

Best moment: When Minnesota?s Jerry Kill coached from the sideline in the second half. He had relegated himself to the press box since his return for a leave to tend to his health. His presence helped spark the Gophers to 14 second-half points.

Best tackle: Michigan State linebacker Kyler Elsworth was an anonymous player most of his career, arriving in East Lansing as a walk-on fullback before eventually moving to linebacker. With senior captain linebacker Max Bullough suspended for the Rose Bowl, Elsworth saw ample action and earned a spot in Spartan lore with a flying tackle on a 4th-and-one that stuffed Stanford?s final drive to preserve victory. Elsworth finished the game with 10 stops and earned Defensive Player of the Game accolades. No doubt, Elsworth epitomized this Spartan program under Mark Dantonio: tough, gritty, blue collar, never quit.

Best almost Gatorade bath: The Michigan State players tried. Really, they did. But, Mark Dantonio deftly dodged a celebratory Gatorade bath in the waning moments of the Rose Bowl. Impressive.

Best disappointment: Yes, I know, it?s a strange category. But, I have to find a way to mention the horrendous Michigan effort in a 31-14 loss to 7-5 Kansas State in the Buffalo Wild Wings Bowl that wasn?t really that close. Michigan started true freshman Shane Morris at quarterback with Devin Gardner out with injury, which made an already struggling offense more vulnerable. How bad was it? The Wolverines had 261 yards. And 82 of those came on a meaningless final drive of the game that resulted in a garbage TD. The defense was every bit as bad-and it really had no excuse–getting shredded by a good-but-not-great K-State offense for 420 yards. The Wolverines went 2-6 in their last eight games and lost their last three.