Tom's Take: Too bad there isn't a playoff this year 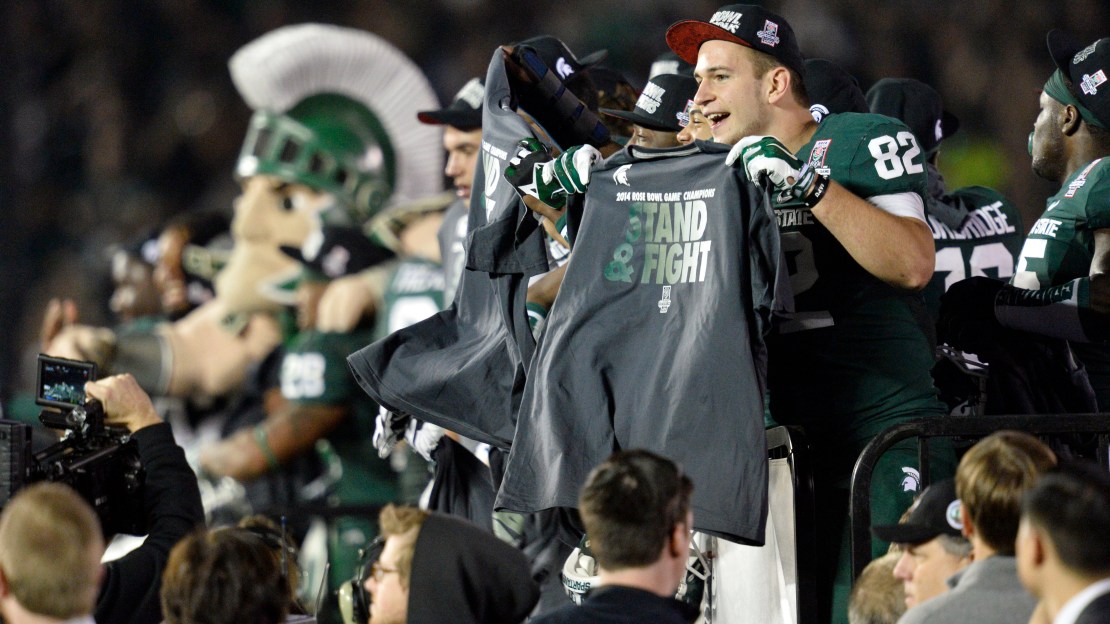 Michigan State arrived at its first Rose Bowl in 26 years as an underdog to Stanford. But the Spartans left as champs in a thoroughly dominating performance that left no doubt about Michigan State?s status as one of the nation?s top teams.

Too bad there isn?t a playoff this season.

The Spartans finished 13-1, with the lone defeat being a 17-13 setback at Notre Dame that involved some iffy pass interference calls vs. MSU. It also won each of its first 12 games by double digits and halted then-No. 2 Ohio State's 24-game winning streak.

Best play: With the game tied at 17, the Spartans began their first drive of the fourth quarter at the Stanford 27-yard line. It took Michigan State just three plays to score, as Connor Cook hit Tony Lippett for a 25-yard touchdown catch. That made it 24-17, MSU?s first lead of the game. And it was a lead it wouldn?t relinquish. Cook finished 22-of-36 for a career-high 332 yards with two touchdowns and an interception.

Magic Johnson U. takes its first lead of the game on this Cook-to-Lippett TD strike. #STANvsMSU #RoseBowl100: http://t.co/BIZIBi1bdv

Best player: Connor Cook. The Michigan State quarterback continues to mature-and impress. The sophomore followed a MVP effort in the Big Ten title game with another MVP effort (offensive) in the Rose Bowl. Not bad for a guy who began the season on the bench.

Best moment: It was a stunning sight to see Mark Dantonio holding up the Rose Bowl trophy. It has been an impressive ascent for the program he took over in 2007. Seven years later, he led the school to its first Rose Bowl since the 1987 season.

Best stat: 1, offensive touchdowns allowed by Michigan State–and it came on the first drive of the game. Stanford?s other touchdown came on an interception return for a score. There also were two field goals. It was yet another impressive effort by the best defense in America coordinated by Pat Narduzzi.

GRADES
Offense: B. Michigan State was able to pass with aplomb most of the day, finishing with 332 yards through the air and 397 overall. But the Spartans never got their ground game on track even though the passing game seemingly should have opened some rushing lanes for Jeremy Langford. In the end, it didn?t matter that MSU?s attack essentially was one-dimensional. Or that the offense committed two turnovers-and could have had more, as Stanford dropped two easy picks.

Defense: A. After a rough first quarter, the ?Spartan Dawgs? lived up to their hype, even without suspended linebacker and captain Max Bullough. Stanford ran for 91 yards in the first quarter with 146 total yards and 10 points. From there, the Cardinal were muted the final three quarters, finishing with 305 yards with 143 coming via the air and 162 on the ground.

Special Teams: B. No big blow ups or big plays. True freshman kicker Michael Geiger did his part in nailing his only field-goal attempt, a 31-yarder early in the third quarter that tied the game, 17-17. Mike Sadler did a good job punting, which was key in a tight game where field position was key. He averaged 45.5 yards on six boots with three inside the 20-yard line and a long of 55 yards.

It was over when: Linebacker Kyler Elsworth, filling in for the suspended Bullough, delivered a huge play in helping stuff Stanford on a fourth-and-one from the Cardinal 34-yard line with less than two minutes to play. The Spartans took over and assumed the Victory formation to seal a 24-20 win. Fitting that the Michigan State defense delivered the game-clinching play.

What worked: The passing game hasn?t been a strength for MSU, as the Spartans arrived in Pasadena averaging 202.5 yards passing. But Michigan State came out slinging today, partly out of necessity with how Stanford was playing defense. The Spartans passed for 332 of the 397 yards they gained in the Rose Bowl. No one envisioned that run-pass imbalance. But, hey, it worked.

What didn't work: The rushing attack. Michigan State entered the game averaging 182.2 yards rushing. But Stanford committed to slowing the Spartans rushing game. And, it paid off, as MSU ran 35 times for 65 yards, 1.9 yards per rush. Langford ran for over 100 yards in eight games leading into the Rose Bowl. But he carried 23 times for 84 yards (3.7 ypc) and a score on this night, ending his school-record run.