Dienhart: Here's what I learned in Week 13 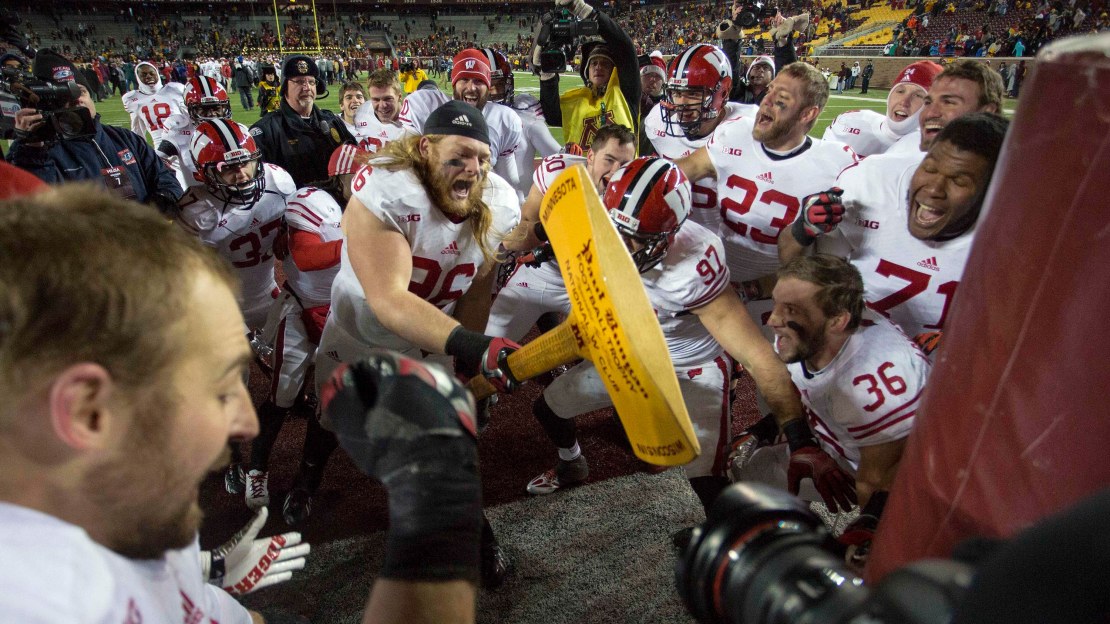 Week 13 saw Michigan State (Legends) and Ohio State (Leaders) wrap up their division to set up the 2013 Big Ten title game that I think we all can be excited about. But there were many other things I learned on Saturday. Check it out.

1. The Big Ten title game has some actual hype to it for the first time in three seasons. No offense to the Wisconsin-Michigan State and Wisconsin-Nebraska clashes of the last two seasons, but this MSU-OSU matchup has a real big-game feel to it, especially if the Buckeyes are 12-0 and the Spartans are 11-1. Heck, a berth in the BCS title game may be on the line for Ohio State. Michigan State will be looking for its first trip to the Rose Bowl since the 1987 season. As for a subplot, how about this: The battle between the Ohio State offense and Michigan State defense should be great theatre. And these teams didn?t meet in the regular season, adding more intrigue.

2. Michigan State?s Connor Cook is the second-best quarterback in the Big Ten. I never thought I?d type that back in August. But Cook slowly has developed as the season has progressed. In the last five games, he has seven touchdowns with just one pick, hitting some key passes and showing command of this offense. A game manger? Nope, Cook has progressed beyond that.

[ MORE: Find out where your team lands on our latest Power Rankings ]

3. I wish Wisconsin and Michigan State-the two best teams in the Big Ten not named ?Ohio State?–played. These teams each have a terrific defense. In fact, the Badgers? defense may be better than the Spartans. Regardless, it?s a healthy debate. So, a clash between the Badgers and Spartans could come down to the offenses. Whose is better? Fascinating.

4. Speaking of Wisconsin and Michigan State, I know both can?t get at-large spots in BCS bowls. But one of them deserves to go, depending on how the season plays out. It would be a shame if the Big Ten gets only one BCS bid. Yes, the conference isn?t the strongest, but these teams are elite. The Badgers and Spartans are playing some of the best football in the nation. What figures to happen is the loser of the Big Ten title game probably will fall to the Capital One Bowl, while Wisconsin appears poised to maybe get a spot in the Orange Bowl.

5. Iowa?s Kirk Ferentz needs to be in the conversation for Big Ten Coach of the Year. If he leads the Hawkeyes to a victory at Nebraska on Friday in the regular-season finale, Iowa would be 8-4. Not bad after a 4-8 season in 2012 that had many of the natives restless. Ferentz has this team playing great defense, as the offense continues to find a way to get things done-usually behind a physical ground game. Iowa has been the Big Ten?s under-told story of 2013.

6. Speaking of the Hawkeyes, with a win at Nebraska, Iowa may be in a New Year's Day bowl. Like, say, the Outback in Tampa. The last time Iowa played on New Year?s Day was in the Orange Bowl after the 2009 season. Further evidence of the progress this program has made in 2013.

7. Nebraska is a tough, resilient team-just like coach Bo Pelini. Whenever this team faces adversity, it seems to rally and play well. The Cornhuskers were playing for pride at Penn State after a loss the week before at home to Michigan State ended title hopes. Would the Huskers play with passion? Yep. Nebraska gutted out an overtime road win when it could have folded in the face of adversity during a trying afternoon in State College, Pa. Impressive. Now, Pelini is poised to notch his sixth season in a row with nine or more wins in Lincoln.

8. The bowl hopes for Northwestern and Indiana officially ended with losses on Saturday. And that?s a shock, as many had both pegged for the postseason back in August. The flameout by NU has been particularly dramatic, losers of seven in a row after a 4-0 start. Some felt Northwestern actually had a shot to win the Legends Division, coming off a 10-win season that fueled optimism in Evanston. Alas, the Wildcats will miss the postseason for the first time since 2007. The Hoosiers have been to a bowl just one time (2007) since 1993, but this was a veteran team with a monster offense that had a comfy schedule. Plus, a schedule with eight home games looked to provide a boost. But, IU will remain home in Kevin Wilson?s third season.

9. Illinois has a pulse. The 20-16 win at Purdue ended a 20-game Big Ten losing skein that was the second-longest in conference annals. A defense that entered the game ranked 11th in the Big Ten (493.5 ypg) limited Purdue to 283 yards and just two touchdowns. Defensive coordinator Tim Banks has to feel born-again-at least for a week. But maybe the Illini can make it two in a row with Northwestern coming to Champaign on Saturday.

10. The Michigan offense remains the picture of dysfunction. For the third time in the last four games, the Wolverines were held under 200 yards offense in their game at Iowa. Michigan had 158 yards vs. Iowa; 175 vs. Nebraska; 168 vs. Michigan State. Will the Wolverines crack the 200-yard mark vs. Ohio State on Saturday? Michigan began the season 5-0. Now, it is 2-4 in its last six games. Imagine if the 7-4 Wolverines had lost those games vs. Akron and at UConn.