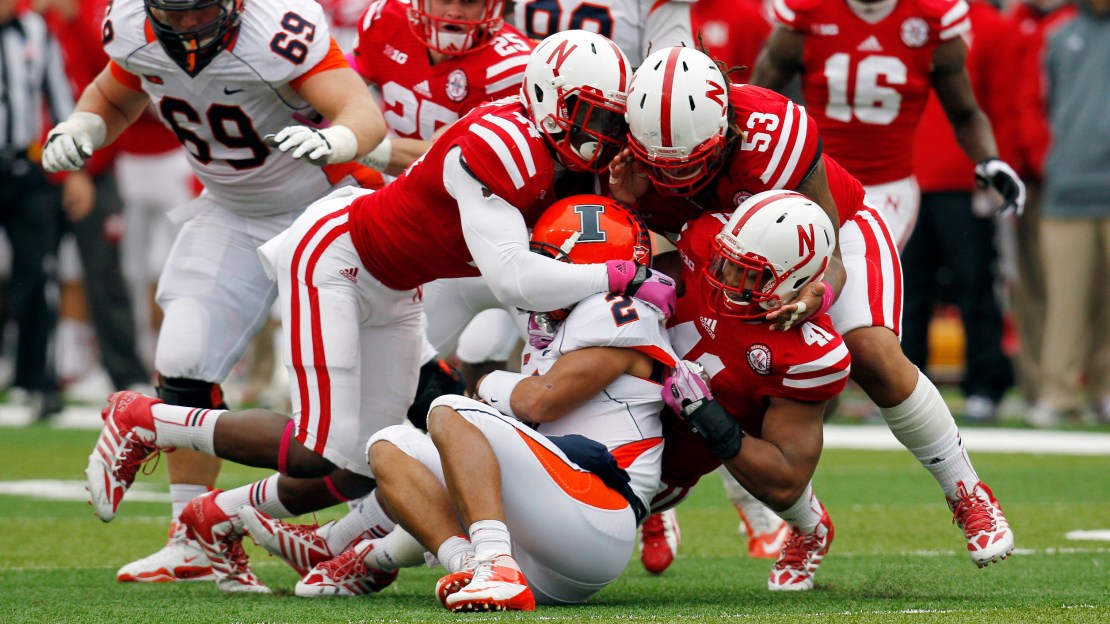 Where to start Friday?s links? How about with this story on Nebraska defensive end Randy Gregory? Sure. The junior-college transfer leads the Big Ten with 8.5 sacks. Has newcomer made a bigger impact in the Big Ten this season? Well, you could make a case for a guy he?ll play this Saturday in Penn State's true freshman quarterback Christian Hackenberg. Still, Gregory has had just as much impact in his own way.

What a stud. Oh, and in case you didn?t know it, Gregory was a high school hoop teammate of Michigan State star Gary Harris. Look it up. You?re welcome.

Michigan State corner Darqueze Dennard is one of five finalists for the Bronko Nagurski Award given to the top defender in the nation. And MSU coordinator Pat Narduzzi says he wouldn?t trade Dennard for anyone.

"Darqueze Dennard is a phenomenal football player," Narduzzi said in a school release. "He's not only one of the best corners in the country; he's one of the top defensive players in the country. He allows us to play aggressively on defense. We wouldn't trade him for any other player in college football."

We know Ohio State corner Bradley Roby is going to turn pro after this season. Urban Meyer told us so. Don?t know why he didn?t let Roby do it. But, whatever. Now, the question begs: What about some other Buckeyes turning pro? Linebacker Ryan Shazier? Quarterback Braxton Miller? Zack Meisel of Cleveland.com has five thoughts on Buckeyes flirting with leaving early.

I just don?t see Miller leaving. Why would he? Look, if Heisman winner Troy Smith couldn?t hack it as an NFL quarterback, how will Miller? They essentially are the same guy. I think too much of what makes Miller a good signal caller involves him running. And, that just doesn?t fly in the NFL. Shazier? Oh, it?s very plausible he would bolt.

Just how big is the Minnesota-Wisconsin game? Bob Sansevere of the St. Paul Pioneer Press takes a look.

Me? It?s the biggest game in this rivalry in at least a decade. I wish I was gonna be there. If I close my eyes, I can smell the tailgating smoke. Ahhh.

The great Tom Shatel of Omaha.com takes a look at the Bo Pelini situation. It doesn?t sound like there is a lot of communication between Pelini and Nebraska A.D. Shawn Eichorst.

The great Mike Hlas takes a spin through the Big Ten. And, like everyone else on the globe, he?s still stupefied by the 43-point effort by Frank ?The Tank? Kaminsky.

Did that really happen? Kaminsky did do it vs ? North Dakota. I?m just sayin?. When Frankie scorches a Big Ten team for 40, call me up.

Hey, Fitzy! Ted Greenstein of the Chicago Tribune has some advice that may help pull your Wildcats out of that six-game funk-o-rama: Take more risks. Yes, it?s that simple ? I guess.

The Big Ten considered moving the Nebraska-Iowa game off of Black Friday but didn?t. Scott Dochterman of the Cedar Rapids Gazette explains.

?When you do schedules, you sort of look at all options on the table,? said Mark Rudner, the Big Ten?s senior associate commissioner for television administration and its scheduling chief. ?But this one just seems to resonate with the fan bases of both institutions, and we didn?t see any need for making a shift just for the sake of making a shift.?

Personally, I love the game on that Friday.

Soak it in, Gophers? fans: This is the last home game for Ra?Shede Hageman. Breathe in. Breathe out. Ahhhhh. What. A. Stud.

Finally, you wanna read something good? I mean REALLY good? OK. Check out this Grantland piece on Penn State. It?s about bringing happiness back to Happy Valley.

Meyer said Jack Mewhort is probably the best practice player he's ever been around, and it's rubbing off on Taylor Decker.

My take: A big statement.

Cool stat from @Huskers: Ameer Abdullah is just one of three running backs who leads his team in total offense.

My take: That is cool.

My take: What a career.

Frank Kaminsky has scored 57 points in his last three halves of basketball. He's done that in 44 actual minutes of playing time.

My take: This is incredible.

My take: Yes, the ?stigma? will be gone. Hyde will smash the 1,000-yard barrier this Saturday vs. IU. Guaranteed.

Took a quick look at IU-Washington. Vonleh just looks better inside than Zeller, mostly because Vonleh actually plays the glass like a man.