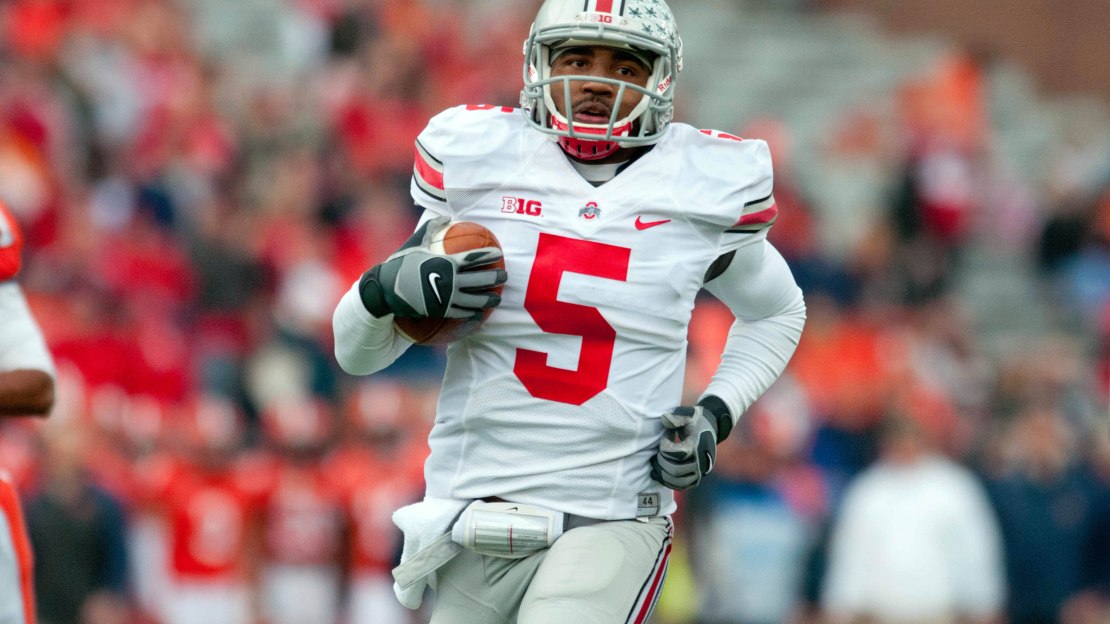 Once again, Saturday is almost here and I've rolled up my sleeves and cranked out four downs worth of football predictions, thoughts, and truths about Week 13 of the Big Ten football season. Why four downs? Because in this post we never punt.

I've given you my game previews (watch out for Minnesota, folks), and we posted some semi-fantastic picks along with the rest of the BTN.com team. The best of Week 13 is also up, and you had some great letters in my mailbag this week, too. For instance, can Michigan State beat Ohio State?

So here now is what?s running through my mind one day away from six more Big Ten football games.

1. Ohio State running back Carlos Hyde will run for at least 200 yards-maybe more-vs. Indiana. He is coming off a 246-yard effort at Illinois. Hyde has rushed for 100 yards in five games in a row, averaging 13.9 and 10.3 per carry in each of the last two games. No way, no how this Hoosiers defense will tackle him.

3. Penn State will find a way to win at home vs. Nebraska. Yes, the Nittany Lions have struggled on the road, falling at Indiana, Ohio State and Minnesota. But they are tough at home, where they have fallen only to UCF. Not sure what the mind-set will be of Nebraska, as it comes in off the home loss to Michigan State. This game seems to be a bigger deal for the Nittany Lions, being Senior Day and all.

4. Northwestern is going to give Michigan State all it can handle. This is a prideful Wildcats team that wants to end its six-game losing streak. The Spartans are coming off two emotional victories, vs. Michigan and at Nebraska. Will MSU be up for this game in sleepy Evanston? The Spartans lost last year, 23-20, to the Wildcats in East Lansing. Before that, Michigan State had won four in a row vs. NU. It last lost two in a row to Northwestern in 2000-2001. I think MSU may not get control of this game until the fourth quarter.

1. Wisconsin and Minnesota may combine for 80 rushes. This Battle for Paul Bunyan?s Axe will be a physical, ground-and-pound game that will be everything an Oregon-Baylor game wouldn?t be-three yards and a lot of clouds of dust.

2. I can?t recall a meltdown as epic as Northwestern?s. In 2011, Illinois began the season 6-0 and then lost six in a row before winning a bowl game. This season, the Wildcats opened 4-0 and have lost six in a row. A loss at home to Michigan State would extinguish NU?s bowl hopes in a season that began with such promise.

3. Back in August, I never thought Iowa would be the ascending team when it met Michigan. But, that?s the case. Iowa beat Michigan three times in a row before falling last season in Ann Arbor, 42-17. So, the Hawkeyes don?t fear the Wolverines. In fact, Iowa is 3-1 vs. Michigan in the last four meetings in Iowa City. I will be surprised if Iowa loses. In fact, there?s a good chance the Hawkeyes could win out-they finish at Nebraska–and go 8-4.

4. Will Indiana ever beat Ohio State again? Seriously. The Ohio State-Indiana series is the definition of ?lopsided.? Since the Hoosiers won in 1951, the Buckeyes are 49-2-2 vs. Indiana. The two IU wins were in 1987-88 and the two ties were in 1959 and 1990. And most times, the outcome of these games hasn?t been close. This week?s meeting could be particularly ugly, as OSU looks for style points in its BCS title game quest.

1. Michigan will struggle mightily to run the ball on Iowa. The Hawkeyes are No. 5 in the Big Ten vs. the run (130.0 ypg); Michigan has the No. 11 rushing attack (135.7 ypg). This is a tough, physical Hawkeye front seven that the spotty Wolverine front won?t be able to block consistently.

2. The Buckeyes will bury the Hoosiers, looking to score some style points on IU to impress BCS pollsters. The fewest points Ohio State has scored this year is 31 vs. Wisconsin. It has scored 56 or more in each of the last three games.

3. Purdue will set a new season-high for points scored in a Big Ten game a week after notching a league-season-high 21 when Illinois comes to West Lafayette. But it won?t matter, as the Boilermaker defense will allow at least one more point.

[ MORE: Get all the latest Big Ten uniform & design changes at Clothes Call ]

37-3. You're looking at the combined record of the four teams that have beaten Iowa this season.

45.5: That's the number points Illinois has allowed per game in Big Ten play this season, the most since Northwestern gave up 46.3 points per game in conference play in 1989.