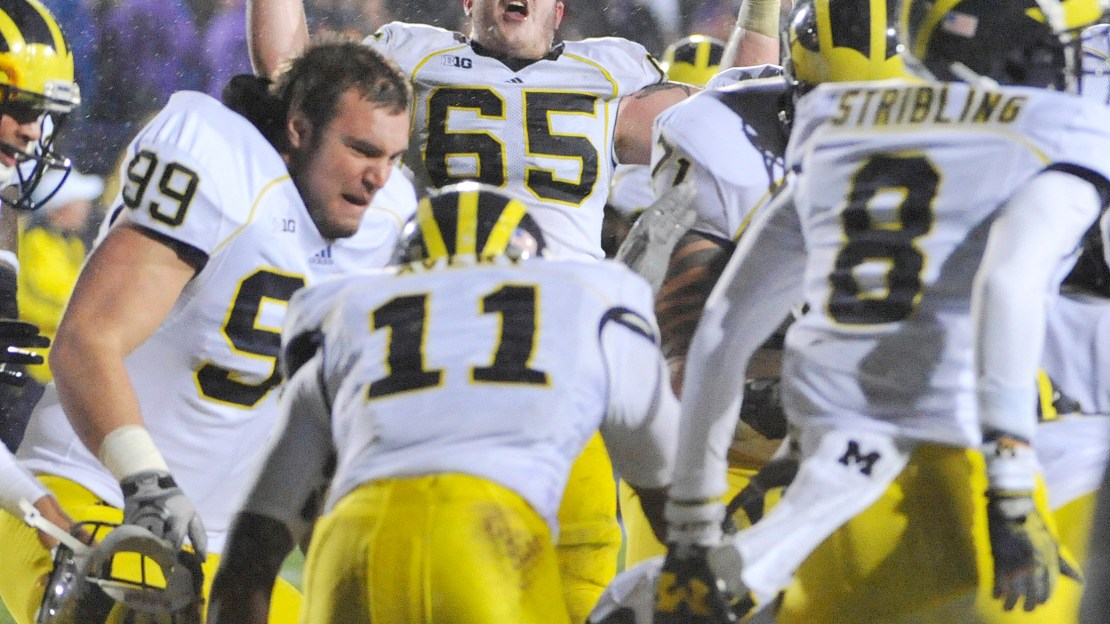 Looking for Week 12 highlights, stats and game stories? Well, you've come to the right place. Catch up on all the day's best highlights and check out all the stats and game recaps from an action-packed Week 12 in this post.

No. 3 Ohio State 60, Illinois 35 | RECAP | BOX | PLAY-BY-PLAY
(AP) Carlos Hyde ran for 246 yards and four touchdowns and Braxton Miller had another 184 yards rushing and two scores Saturday to push No. 3 Ohio State past Illinois 60-35. But even with Hyde's offensive explosion, the Buckeyes (10-0, 6-0 Big Ten) needed a third-quarter defensive stop and safety to secure the win.After trailing 28-0 in the second quarter, Illinois (3-7, 0-6) closed to 35-21 in the third on two Nathan Scheelhaase touchdown passes.

Penn State 45, Purdue 21 | RECAP | BOX | PLAY-BY-PLAY
(AP) Zach Zwinak ran for three touchdowns and Allen Robinson set Penn State's single-season receptions mark, leading the Nittany Lions to a 45-21 win over Purdue on Saturday. Zwinak had a pair of 1-yard TD runs in the first half and a 5-yard score in the second, boosting his season total to 12. Robinson's fifth catch of the game was his 78th of the season, topping the 77 catches he had last season. He also holds Penn State's single-season yards receiving record.

No. 17 Wisconsin 51, Indiana 3 | RECAP | BOX | PLAY-BY-PLAY
(AP) James White rushed for a career-high 205 yards and Melvin Gordon added 146 as No. 17 Wisconsin beat Indiana 51-3 on Saturday. The Badgers (8-2, 5-1 Big Ten) came in expecting a big game on the ground against the conference's 10th-ranked rushing defense with the Hoosiers (4-6, 2-4) giving up an average of more than 217 yards a game. Wisconsin topped that just minutes into the second quarter, had 323 yards rushing at the half and finished with 554.

No. 14 Michigan State 41, Nebraska 28 | RECAP | BOX | PLAY-BY-PLAY
(AP) No. 14 Michigan State converted five Nebraska turnovers into 24 points and took a big step toward winning the Big Ten Legends Division with a 41-28 victory on Saturday. Jeremy Langford ran 32 times for 151 yards and scored two touchdowns, and Keith Mumphrey caught a 27-yard touchdown from Connor Cook in the fourth quarter after the Cornhuskers pulled within six points.

INSTANT HIGHLIGHT: @MSU_Football is one win away from the B1G title game! WATCH all of today's top plays – http://t.co/wtqZXZNoFO

Michigan 27, Northwestern 19 (3OT) | RECAP | BOX | PLAY-BY-PLAY
(AP) Devin Gardner scored on a 5-yard run to lift Michigan to a 27-19 triple-overtime victory over Northwestern on Saturday after the Wolverines' Brendan Gibbons tied it with a 44-yard field goal at the end of regulation. Gardner scored on an option and ran it in on the two-point conversion to make it an eight-point game. Northwestern had one more chance, but Trevor Siemian got sacked for a 14-yard loss by Jibreel Black on second down. Then, his desperation pass on fourth down got intercepted by Thomas Gordan.