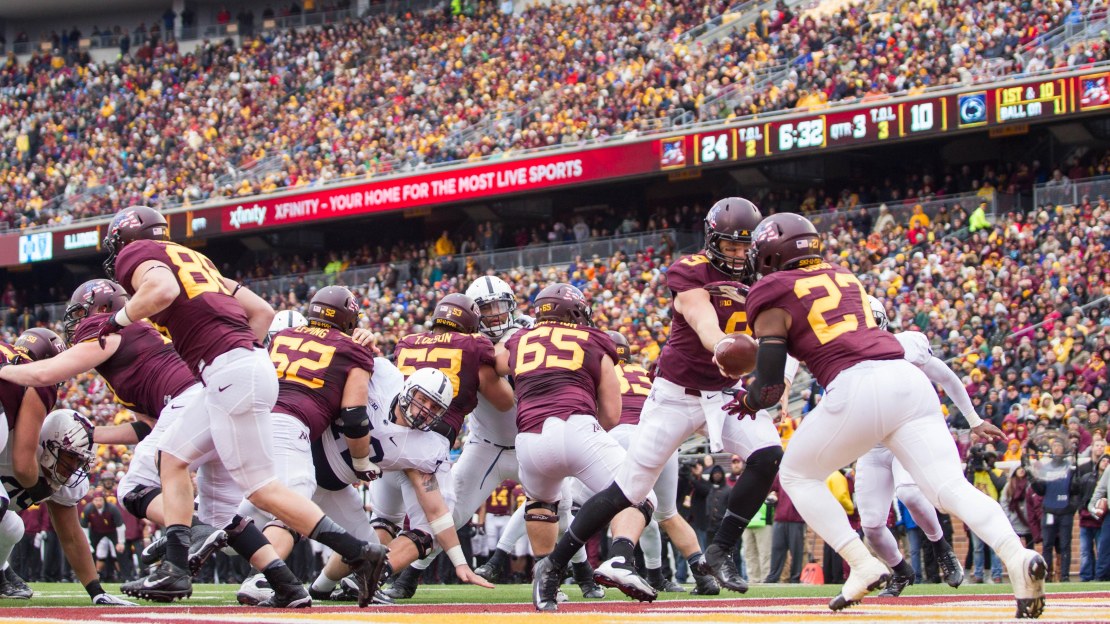 An interesting Saturday of action, with Nebraska being the headline story by going on the road and earning a huge win. The last time the Cornhuskers played in Ann Arbor, Nebraska lost, 45-17. The feel-good story in Minnesota also continued with a fourth victory in a row. Here?s a wrap on Week 11 in the Big Ten.

Biggest surprise: Nebraska winning at Michigan, 17-13, after that Hail Mary win last week vs. Northwestern. It was a nice victory for the Cornhuskers, who still control their own destiny in the chase for the Legends Division crown with a big game vs. Michigan State next Saturday in Lincoln. It was the Wolverines? first loss at home since a defeat to Wisconsin in 2010, ending a 19-game run in the Big House.

Biggest disappointment: Hate to pile on Michigan, but we have no choice. The Wolverines were coming off a 29-6 beatdown at Michigan State and needed to show some progress. It didn?t happen, as the offense continued to struggle mightily up front. Add it all up, and the Wolverines have scored one touchdown in the last eight quarters and are 2-3 in the Big Ten to end their division title hopes.

Best play: Late in the fourth quarter and trailing 13-10, Nebraska proceeded to drive to Michigan?s 5-yard line. That?s where Huskers? quarterback Tommy Armstrong made an awkward flip forward to Ameer Abdullah for the game-winning touchdown pass.

Play this again: The Nebraska-Michigan game featured plenty of ebbs and flows. The Cornhuskers jumped to a 10-0 lead. The Wolverines scored the next 13 points. Nebraska regained composure to score the game-winning touchdown with 2:03 left to win the game. The game wasn?t pretty, but it was exciting, as Michigan had 175 yards and Nebraska had 273.

Never play this again: Iowa 38, Purdue 14. The game was tied, 7-7, in the second quarter. That?s when the Hawkeyes took over, going on to out gain the Boilermakers, 509-266, in a total act of domination. This game was won up front, as Iowa manhandled Purdue in out rushing the Boilers 318-53. If not for a late junk TD, the final score would have been even worse.

– Nebraska?s division title hopes. It?s this simple-win out, and go to the Big Ten title game for a second season in a row.

– Minnesota. Buy it all. This is the hot team that has ripped off four wins in a row. The last time the Golden Gophers won four Big Ten games in a row was 1973. This team is playing well on both sides of the ball, moving to 8-2 overall and 4-2 in the Big Ten after a 24-10 win vs. Penn State. And there still is a scenario in which the Gophers could win the Legends. Amazing.

– Jordan Canzeri. Twenty carries for a career-high 165 yards? Where did this come from? Who cares? The Iowa back led the charge for a 307-yard rushing attack in an annihilation of Purdue. His previous season-high was 73 yards vs. Western Michigan on Sept. 21.

– David Cobb. The Minnesota back eclipsed the 100-yard rushing mark for a fourth time in a row, rambling for 139 yards on 27 carries with a touchdown.

– Ameer Abdullah. The Nebraska back keeps on chugging, running 27 times for 105 yards and a TD, in addition to the game-wining TD reception. He has rushed for 100 yards in six consecutive games and eight of nine this season.

– Indiana running backs. Tevin Coleman ran for 215 yards and Stephen Houston raced for 135 yards. It was the second week in a row that each has eclipsed the 100-yard mark, as IU ran for 357 yards vs. Illinois.

– Nebraska defense. The unit has been maligned often in 2013, but it excelled today in holding Michigan to 175 yards. The Huskers held the Wolverines to minus-21 yards rushing on 36 carries.

– Purdue offense. This is still a dysfunctional attack, but it showed a modicum of life today by scoring its first touchdown since Oct. 12. Then again, the first score game after an Iowa special teams gaffe required the Boilermakers to drive only 35 yards. Nonetheless, this is progress.

– Steve Hull. The Illinois wideout made nine catches for 224 yards and two TDs. Not bad for a converted safety.

– Tommy Armstrong, Jr. So much for missing Taylor Martinez. Armstrong hit 11-of-19 passes for 139 yards and the game-winning touchdown. He?s 5-0 as the Huskers starter.

– Nathan Scheelhaase. Illinois lost, but not because of him. He hit 38-of-57 passes for 450 yards with two touchdowns and a pick. He had a career-high 495 yards of total offense.

– James White. The Wisconsin back has gotten lost in Melvin Gordon?s shadow. But White has come on in recent weeks. Today, he carried 23 times for 147 yards and two scores and caught six passes with a TD.

– Cody Latimer. The Indiana wideout made 11 catches for 189 yards and three scores.

– Michigan offense. It has yielded seven sacks in each of the last two games. And that?s a big reason why the Wolverines have minus-69 yards rushing the last two weeks: -48 to Michigan State and -21 vs. Nebraska.

– Purdue offense. Yes, I know I told you to buy it earlier, but sell it, too. The Boilermakers mustered just 266 yards of offense, running 28 times for 53 yards (1.9 ypc). Enough said.

– Penn State on the road. The Nittany Lions are 0-3 in true road games, getting outscored 131-48 at Indiana, at Ohio State and at Minnesota. And there is a trip left to Wisconsin. Ugh.

– Purdue defense. Playing the Boilermakers is a get-well card for any struggling offense. Ask Iowa, which ripped Purdue for 498 yards, with 307 coming on the ground. The Hawkeyes averaged 6.1 yards per carry and generally did whatever they wanted to do.

INSTANT HIGHLIGHTS: @HoosierFootball's offense was on its game today. #orvillemoment WATCH all the top plays – http://t.co/cjlK9vB525

All eyes will be on Lincoln, Neb., with Michigan State playing at Nebraska in what for all intents and purposes will be a de facto Legends Division title game. Michigan is at Northwestern in a meeting of desperate teams. Ohio State will look to stay perfect at reeling Illinois, which has lost 19 Big Ten games in a row. A loss would give Illinois the second-longest Big Ten losing skein ever. A loss at Wisconsin will put Indiana on the brink of bowl ineligibility. Purdue is at Penn State in a game that, frankly, means absolutely nothing.