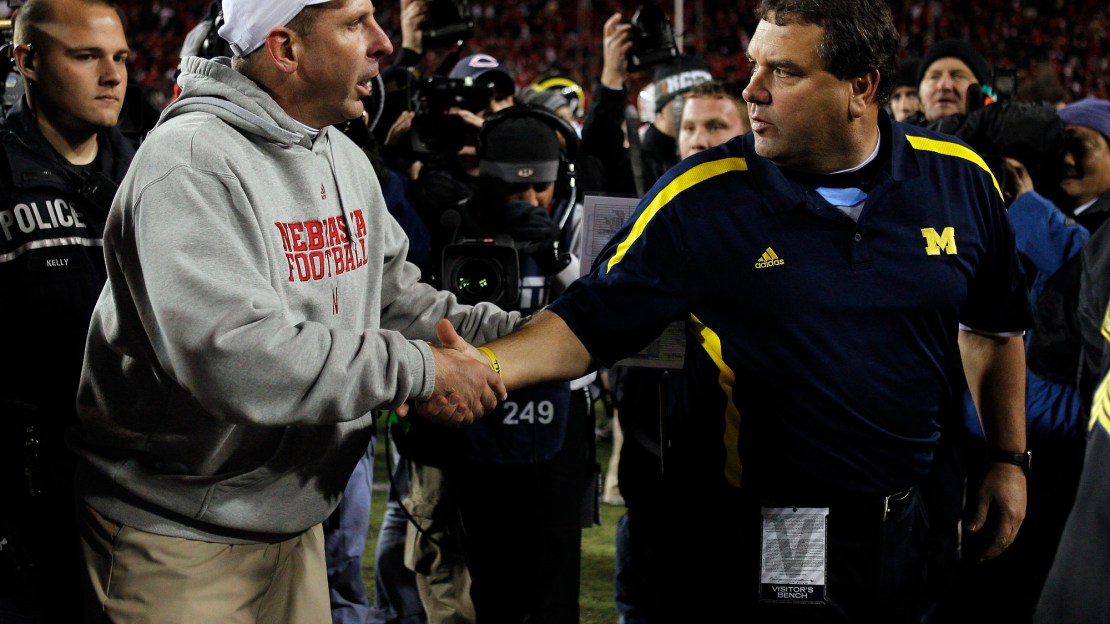 Week 11 is highlighted by a key Legends Division clash, with Nebraska playing at Michigan. Let?s call this the ?Sense of Urgency Bowl.? Sounds about right. The loser will have a difficult time getting back into the division hunt.

There also is a rare November non-conference tilt, with BYU playing at Wisconsin. Beware, Badgers. This looks like a tough game. And we also may see Iowa become bowl eligible with a win at Purdue. Illinois returns to Indiana, where it won its last Big Ten game in 2011. Since then, the Illini have dropped 18 league games in succession. Will the misery end? Here?s the best of Week 11. By the way: Michigan State, Northwestern and Ohio State are off.

BEST GAME: Nebraska at Michigan. These teams aren?t scheduled to meet again until 2018, so enjoy this clash of iconic college football programs. The teams have split their two games since the Cornhuskers joined the Big Ten with each team winning on their home field. Michigan beat Nebraska, 45-17, the last time they met in Ann Arbor back in 2011. Each team is chasing Michigan State, with the loser facing a huge mountain in the Legends Division race. This clash has lost some luster with Nebraska quarterback Taylor Martinez out with injury.

UPSET ALERT: Wisconsin needs to be careful vs. BYU this Saturday in Camp Randall Stadium. Bronco Mendenhall has a good team. BYU is 6-2 and was off last week, giving the Cougars extra prep time. And BYU is hot, having won five games in a row, knocking off Boise State, 37-20, the last time out. BYU?s resume also includes wins over Texas and Georgia Tech. The Cougars have a balanced attack, averaging 252 yards rushing and 258 yards passing. If BYU can keep the Badger front off balance, the Cougar attack could thrive. Ask Texas, which allowed 679 yards and 550 yards rushing in a 30-21 defeat that cost Longhorns defensive coordinator Manny Diaz his job. BYU QB Taysom Hill must be contained in a quick-paced attack that averages nearly 90 plays per game and hit a high of 115 in a 47-46 victory at Houston on Oct. 19. Wisconsin lost at home, 28-3, to BYU in 1980 in the only meeting between the teams. Wisconsin must win to keep alive its BCS at-large bowl hopes.

MUST WIN: Iowa needs to take care of business at Purdue, where it will aim for win No. 6 to become bowl eligible a season after going 4-8. If the Hawkeyes somehow fall in West Lafayette, they may have a difficult time getting to the postseason, needing to win vs. Michigan or at Nebraska in the final two games of 2013. So, beat the Boilermakers, or risk missing a bowl for the second season in a row. And Iowa hasn?t missed the postseason two seasons in a row since going bowl-less from 1998-2000. Last season, the Boilermakers won at Kinnick Stadium for the first time since 1992, taking a 27-24 decision. Still, the Hawkeyes have won five of the last seven meetings.

QUARTERBACK MATCHUP TO WATCH: At the beginning of the year, it looked like Devin Gardner vs. Taylor Martinez would be the one to watch this week. Well, with Gardner?s struggles and Martinez?s injuries, that matchup is off the books. So, let?s go with Illinois? Nathan Scheelhaase vs. Indiana?s Nate Sudfeld and Tre Roberson.  Scheelhaase has been a revelation, directing the attack of new coordinator Bill Cubit. The senior is second in the Big Ten in passing yards. Sudfeld and Roberson are a dynamic duo. Sudfeld leads the Big Ten with 16 touchdown passes and is third in passing yards; Roberson is an underrated passer and deadly with his feet running this go-go IU offense. Expect a lot of passes, yards and points in this game, which could take a long time to play, but fun to watch.

PLAYER ON THE SPOT: If Penn State is able to run, everything else in Bill O?Brien?s offense flows well. That mean?s running back Bill Belton is under the microscope. He?s coming off a 201-yard rushing effort in an overtime win vs. Illinois, the school?s first 200-yard effort since Larry Johnson turned the trick in 2002. Belton, a former receiver, needs another big game on the ground to make Minnesota?s front respect the Penn State rushing attack so quarterback Christian Hackenberg will have room to throw vs. a vulnerable Gophers secondary.

KEEP AN EYE ON: The Michigan offensive line. To say the unit has struggled would be an understatement. The interior of the Wolverine front has been the issue in Ann Arbor, with the coaches shuffling personnel looking to get a steady push. No changes are in store for this week. But, honestly, the staff has only so many options. A true freshman, redshirt freshman and redshirt sophomore have been in the mix. The Huskers? front is deep and talented, but there has been a lack of consistent big plays. Which unit will step up?

BEST COACHING MATCHUP: BYU?s Bronco Mendenhall vs. Wisconsin?s Gary Andersen. In fact, this will be the 10th consecutive season that Andersen will have faced BYU. And this will be the 16th time in 17 years the first-year Badger boss will have faced the Cougars. Andersen went a combined 6-5 against BYU during two stints as an assistant coach at Utah and 1-3 against the Cougars as head coach at Utah State. Andersen and Mendenhall are among the most underrated coaches in the nation. Check out their Xing and Oing on Saturday. It will be good, especially the clash between the Badgers defense and Cougar offense.

COORDINATOR MATCHUP TO WATCH: Can?t wait for the battle between Nebraska offensive coordinator Tim Beck and Michigan defensive coordinator Greg Mattison. Beck has one of the top offenses in the Big Ten, but it?s banged up. Mattison?s crew remains a work-in-progress, as the Wolverines continue to look for better play in the back end and along the front. This is the chess match that could decide this key game.