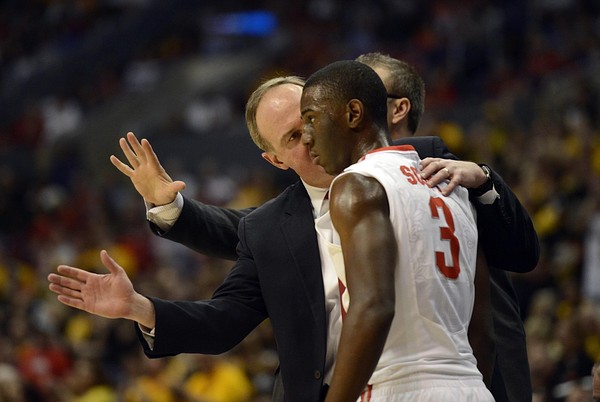 The exhibition basketball season is upon us (view our streaming schedule). Soon enough, the games will start to count. With that in mind, I thought I'd offer up my All-Big Ten Underrated Team. See my five guys in this post. Who did I miss? Tweet it my way, @BTNBrentYarina.

G: Shannon Scott, Jr., Ohio State. Aaron Craft gets all of the hype and pub, and rightly so. But his fellow guard is pretty good, too. Scott burst onto the scene last year, using his speed and quickness to develop into one of the Big Ten's better on-the-ball defenders (1.7 spg) and distributors (3.8 apg). Alert: Scott amassed those numbers in just 20.9 minutes a night.

G: Ben Brust, Sr., Wisconsin. Bo Ryan's players are typically underrated, and Brust is the perfect example. Did you know the guard led the Badgers in scoring last season (11.1ppg)? Did you know he out-rebounded the ball of energy that is Mike Bruesewitz (5.1 rpg)? On top of that, Brust is one of the Big Ten's elite 3-point artists (39 percent).

G/F: Terone Johnson, Sr., Purdue. While shooting isn't Johnson's forte (41 percent for career). he's one of the Big Ten's bigger and more physical guards. He's also a plus-rebounder for his position (4.7 rpg in 2012-13) and has improved his stroke from distance, getting up to 35 percent last season.

F: Shavon Shields, So., Nebraska. What Shields did as a freshman on a team void of a star playmaker and depth is remarkable. Despite only starting 19 games, the guy shot 47 percent and averaged 8.6 points and 5.1 rebounds. Even more impressive: Shields scored at least 17 points four times in Big Ten play, including a career-high 29 at Penn State. He's only going to get better now that Tim Miles has more weapons.

F: Ross Travis, Jr., Penn State. No doubt about it, the 6-6 Travis is a tweener; he lacks the size and strength to bang with the conference's biggest guys, and he lacks the speed to keep up with small forwards. But the junior knows his role, and he does it without much fanfare. Last season, Travis totaled five double-doubles and averaged 7.2 rebounds in Big Ten play. As he gets more experience and adds size, those numbers will only rise.

Sixth man: Austin Hollins, Sr., Minnesota. Hollins isn't a sixth man, but that's what he is on this team. The other Hollins in Minnesota's all-Hollins backcourt, Austin is overshadowed by star Andre Hollins. Austin isn't the scorer Andre is, to be sure, however he's a streaky shooter who has improved as a scorer, rebounder, distributor and defender every season.