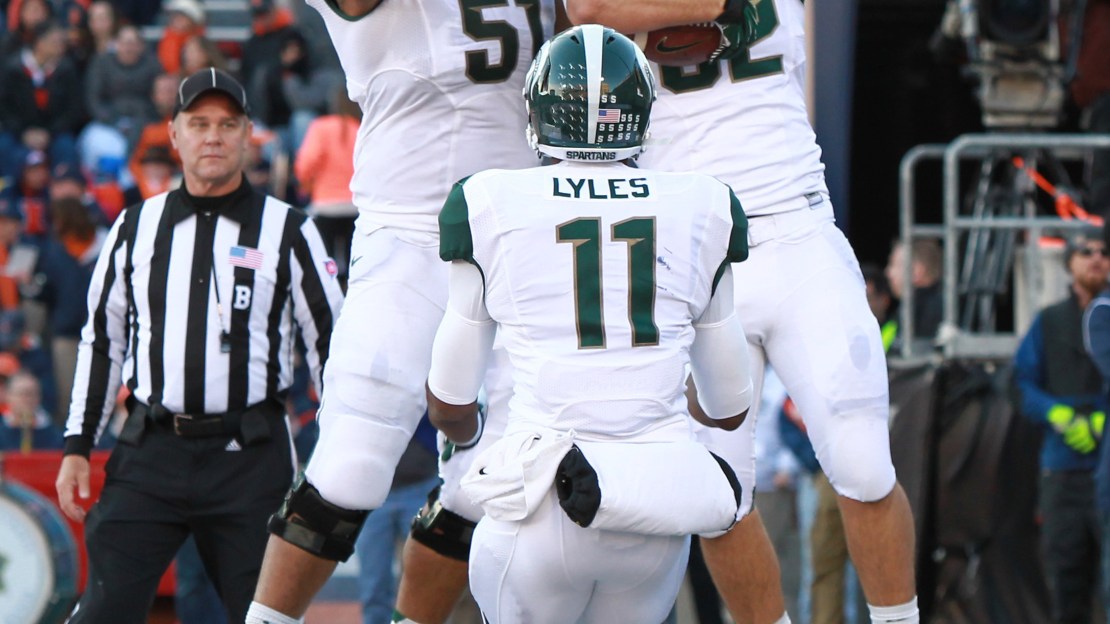 If you somehow had any doubts prior to Saturday about who was the best team in the Big Ten, Ohio State surely cleared those up with its dominating effort vs. Penn State. Iowa and Minnesota were big risers. But Saturday wasn?t so good for Nebraska and Penn State. Here are my post-Week Nine Power Rankings, presented by ArcelorMittal.

1. Ohio State (8-0, 4-0). It was pure domination for the Buckeyes vs. Penn State. I?m guessing Ohio State wanted to send a message to the BCS and score some style points with this annihilation. Impressive. This offense is clicking.
Last week: 1
Next: at Purdue

2. Wisconsin (5-2, 3-1). The Badgers were off on Saturday. They are playing about as well as any team in the Big Ten. Let?s hope the time off doesn?t disrupt the mojo of the team. Will Wisconsin lose again?
Last week: 2
Next: at Iowa

3. Michigan State (7-1, 4-0). The Spartans sent a big statement to the rest of the Legends Division with a blowout victory at Illinois. The defense dominated-again. Even better: Connor Cook looked like an All-Big Ten quarterback after a spotty effort the week before.
Last week: 4
Next: Michigan

4. Michigan (6-1, 2-1). The Wolverines are coming off a bye. How will the defense look? It was shredded the last time out vs. Indiana. The trip to Michigan State will be the ultimate test for the Wolverine offense that went wild vs. the Hoosiers.
Last week: 5
Next: at Michigan State

5. Iowa (5-3, 2-2). The win over Northwestern allowed the Hawkeyes to take a big step toward bowl eligibility. Even better-Iowa has surpassed last season?s win total. Yes, Kirk Ferentz still has it. But the rush defense and passing offense need to improve.
Last week: 7
Next: Wisconsin

6. Minnesota (6-2, 2-2). The Golden Gophers got physical with the Cornhuskers in a program-defining victory that could push Minnesota to heights no one anticipated. This is a tough and driven team that keeps improving.
Last week: 8
Next: at Indiana

7. Nebraska (5-2, 2-1). Any feel-good vibe generated by that three-game winning streak evaporated in the sobering 34-23 loss at Minnesota. There are more questions than answers-and that?s not a good think with the calendar about to turn to November.
Last week: 3
Next: Northwestern

8. Penn State (4-3, 1-2). The Nittany Lions weren?t ready for what they encountered at Ohio State. No shame in that. The Buckeyes are really good. I think winning on the road anywhere will be difficult for Penn State in 2013. The Nittany Lions have played two true road games and lost both by an aggregate 107-38.
Last week: 6
Next: Illinois

10. Northwestern (4-4, 0-4). The misery continues for the Wildcats, whose 4-0 start has melted into a 4-4 reality that has Northwestern?s season on the edge. But there were things to build on in the second half of the Iowa game. Still, will NU make it to a bowl?
Last week: 10
Next: at Nebraska

11. Illinois (3-4, 0-3). The Big Ten losing skein is now at 17 after the Illini were drubbed in a Homecoming clash with Michigan State. The defense has been an issue all season. And the offense was muted by a stellar Spartan defense. Let?s chalk up Saturday to growing pains.
Last week: 11
Next: at Penn State

12. Purdue (1-6, 0-3). Unlike their last bye week, the Boilermakers haven?t made any major scheme and personnel changes. It?s all about continuing to develop young talent and to improve. More rough times are ahead, but Darrell Hazell has a plan and is driven to carry it out.
Last week: 12
Next: vs. Ohio State