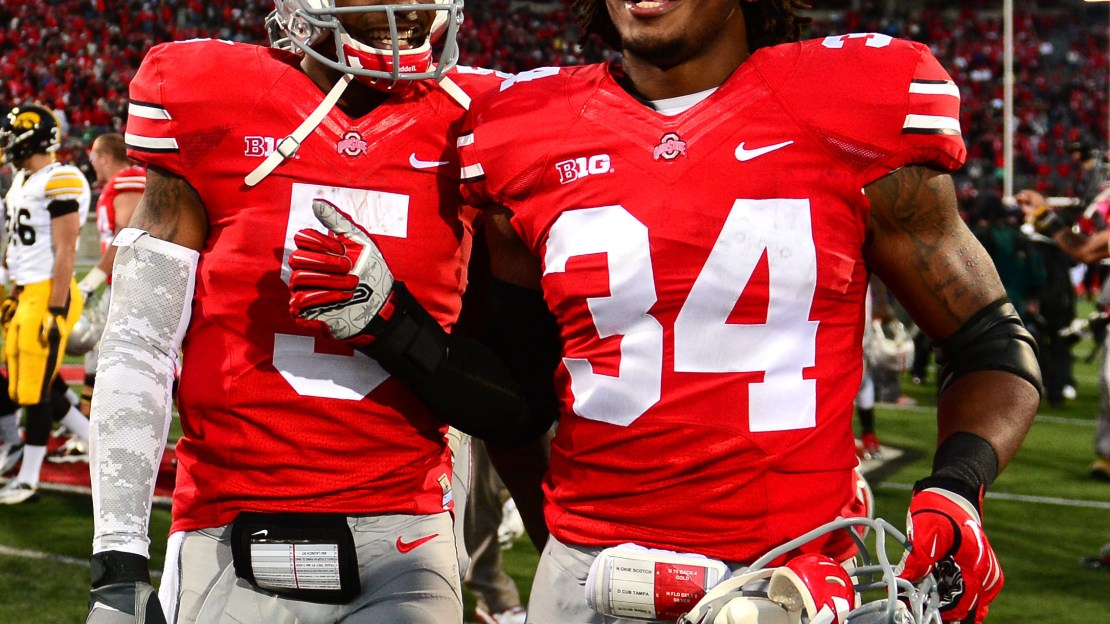 This is a light menu for Week 9, as there are just four games. Wisconsin, Michigan, Purdue and Indiana all are off this week. And there is just one marquee game, with Penn State playing at Ohio State looking to end the Buckeyes? remarkable run of 19 victories in a row. Here?s a look at this week?s games.

Why you should watch: These are two teams struggling for a toe hold in the Legends Division. Northwestern?s season is sinking, as a 4-0 start has melted into a 4-3 reality with three consecutive losses. If the Wildcats want to get bowl-eligible, they probably need to win this game. The Hawkeyes are coming off a loss at Ohio State, but hopes remain high for a program appears on the upswing. Like NU, if Iowa wants to go bowling, it probably needs to win this game.

Player on the spot: Northwestern quarterback Kain Colter. He missed last week?s 20-17 home loss to Minnesota with an ankle injury. But Colter looks set to play in Iowa City. And that?s good, because Colter is a more dynamic option under center than Trevor Siemian, who is in a funk. NU needs Colter?s play-making ability with his feet for an offense that began the season looking like one of the best in the Big Ten but now is No. 8 in the league (419.9 ypg).

Key matchup: Iowa offensive line vs. Northwestern defensive line. The Hawkeyes have a big, tough and physical front that can maul foes. The rushing game ranks fifth in the Big Ten (196.4 ypg) and can bang foes with Mark Weisman and Damon Bullock. Conversely, the Wildcats front has been roughed up and has been a bit of a disappointment, as Northwestern is No. 9 in the league vs. the run (169.4 ypg). If Iowa can establish a ground game, that will make the play-action passing of Jake Rudock that much more effective in an attack that often used three tight ends last week.

Key number: 8, number of teams in the nation that have led every game at halftime this season. Iowa is one of them.

Why you should watch: The Cornhuskers are coming off a bye, gearing up for a big finish to the 2013 season. Honestly, if Nebraska wants to win the Legends, it has to win this game. Plain and simple. And the Huskers are playing well, winners of three in a row after that ugly home loss to UCLA. Will quarterback Taylor Martinez play? It looks to be a game-time decision. The Golden Gophers are coming off a big 20-17 win at Northwestern that ended a two-game slide and was the team?s first without Jerry Kill on the sideline. It may be a triumph that sparks Minnesota to big things. One more win, and Minnesota is bowl eligible.

Player on the spot: Minnesota quarterback Philip Nelson and Mitch Leidner. It?s looking likely that Nelson will get the start after Leidner got the nod last week. But, both could play again. Regardless of who takes snaps, Gophers need better production from under center if they want to pull the upset. Minnesota is 11th in the Big Ten in offense (327.9 ypg). The passing game is the worst in the conference (117.7 ypg). If Nebraska is able to stack the line to stop the run and doesn?t have to pay heed to the passing game, Minnesota will struggle big-time.

Key matchup: Nebraska offensive line vs. Minnesota defensive line. The Minnesota defense has been OK, ranking seventh in the Big Ten (375.9 ypg). It will need to be on its A game vs. a strong Nebraska attack that?s No. 4 in the league (490.2 ypg). The Huskers have a dynamic collection of receivers led by Kenny Bell and a strong ground game paced by Ameer Abdullah. Gophers tackle Ra?Shede Hageman is coming off his best game of 2013 and needs to be a dominant playmaker vs. the likes of tackle Jeremiah Sirles and Co., for a strong Cornhusker o-line.

Why you should watch: Should the Spartans be on upset alert? Michigan State is coming off a methodical and unimpressive 14-0 home victory vs. Purdue. Now comes a trip to Illinois, which hasn?t won a Big Ten game in two years. Will the Spartans look past the struggling Fighting Illini with a visit from Michigan looming on Nov. 2? At 3-3, Illinois is fighting for its bowl life.

Player on the spot: Michigan State quarterback Connor Cook will be under the microscope again after struggling vs. a poor Purdue defense last week. How bad did it get? Mark Dantonio fessed later that he considered switching quarterbacks. Cook hit just 13-of-25 passes for 107 yards last Saturday, misfiring on several throws to open receivers. It seemed like he had turned a corner. Now?

Key matchup: Michigan State secondary vs. Illinois passing. If there is one area of the Spartans? stellar defense that has been vulnerable, it has been the pass defense. MSU is just 11th in the Big Ten vs. the pass, allowing  177.0 yards per game and 10 scoring strikes. (True, offenses usually have to pass because they can?t run vs. MSU. Still, some leaks have cropped up.) Notre Dame, Indiana and even Purdue have had some success passing vs. MSU. The Fighting Illini have the No. 2 passing attack in the league (287.7 ypg). And chucking the ball likely is the only way they can stay in this game.

Why you should watch: Can the Buckeyes remain on their march to an unbeaten season? Ohio State has won 19 games in a row-and really hasn?t been tested this season. The Buckeyes can?t afford any slips if they want any shot at advancing to the BCS title game. The Nittany Lions were off last week following a wild four-overtime win vs. Michigan. Penn State has the offense to punch some holes into the Buckeye defense, but can the Nittany Lions slow down a hot OSU offense? Penn State is 0-9 vs. top 5 teams since 1999 and can end that drought Saturday at No. 4 Ohio State.

Player on the spot: Penn State running back Bill Belton. Let?s throw Zach Zwinak in there, too. The Nittany Lions are going to need a big effort on the ground if Penn State wants to pull the upset in Columbus. That could be tough, as the Nittany Lions have the No. 11 rushing attack in the league (157.2 ypg). Ohio State has the No. 3 rush defense (92.4 ypg). Belton has been one of PSU?s most-improved players. Zwinak may be getting back into the good graces of the staff after a big fumble vs. Michigan.

Key matchup: Ohio State offensive line vs. Penn State front seven. Urban Meyer has been pleased with his o-line all season, as he considers it one of the strengths of the team. The unit must continue to shine vs. a solid Penn State front that must contain Braxton Miller by getting some pressure. A return to health by the Nittany Lions linebackers will help. Mike Hull and Nyeem Wartman played most of the first half of 2013 at less than 100 percent but each is coming off a good game vs. Michigan. They-along with tackle DaQuan Jones–need to be active vs. Miller and the Buckeye front.

Key number: 0, rushes for negative yards this season for Ohio State running back Carlos Hyde on 72 carries. If he has a big day, Penn State may be in trouble.