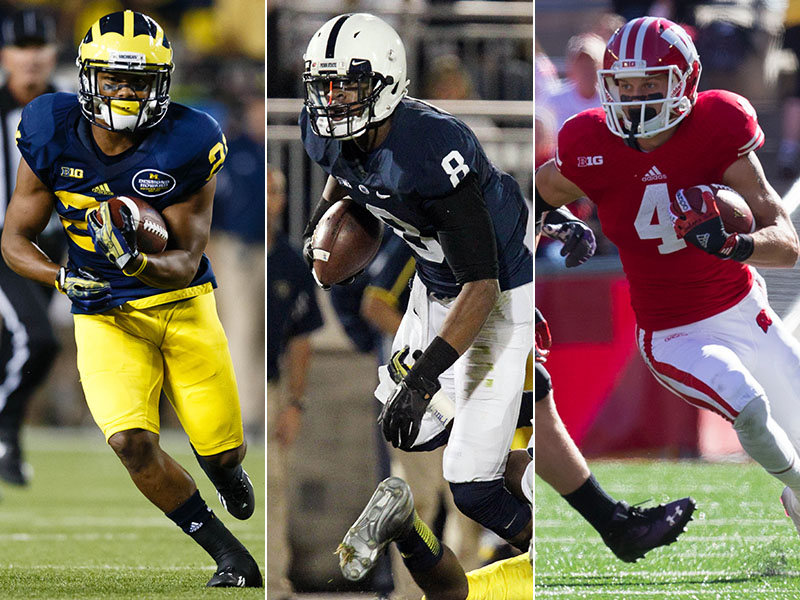 Allen Robinson entered the 2013 season as the Big Ten's undisputed top wide receiver. The Nittany Lion star earned the honor following his breakout 2012 campaign, in which he led the conference in receptions (77), receiving yards (1,013) and touchdowns (11). Through six games, Robinson is on pace for even better numbers. But is he the Big Ten's best receiver? I asked our resident quarterback, Stanley Jackson, for his answer.

BTN.com: Even after Jeremy Gallon's record-setting performance?
SJ: Yeah, I mean, Gallon is tough. The challenge with Jeremy, I think, this year is he hasn't been as consistent as you want. He showed up (in) two really big games – last week against Indiana, and he was great against Notre Dame. But in between he hasn't had the numbers. I think everyone understands where Penn State wants to go with the football. They're going to Allen Robinson. And still knowing that, he's able to get free and catch balls. Plus his size, he's much bigger than Jeremy Gallon and that allows him to do things Jeremy can't.

BTN.com: As a quarterback, what would it be like throwing to Robinson, Gallon and Jared Abbrederis? What does each bring as a receiver?
SJ: The first thing is you want to make sure the guy catches the ball. (Jared) Abbrederis is sensational at locating and catching the football. He catches everything (Joel) Stave throws at him, and that's a great thing to have. And then whenever you can go over the top, have a guy go up and dunk on somebody, you get that out of Allen Robinson. And Jeremy, his elusiveness after he catches the ball and his great balance, leads to a lot of YAC yards. They all have their attributes that lend to make a really good receiver. You could take the best of each one of them and you'd have Megatron (Calvin Johnson). But, at the end of the day, you want a guy who is going to be consistent and who shows up every week. When I think of the three of them – even though all three are having phenomenal years – still Robinson gives you the best of all three worlds.

BTN.com: Of the three guys, who has the brightest NFL future?
SJ: You know, that's always kind of tough because so many factors go into it. Historically, when you look at this conference, some guys who you expected to do well didn't, and some guys you didn't think would do so well did. They have to have a lot of things work in their favor. You have to be able to run, a big body helps. Guys like Devin Smith and Quincy Enunwa have a shot at Sunday. But again, when I look at consistency week in week out, big body, strong guy, Allen Robinson is probably the first guy off the board.