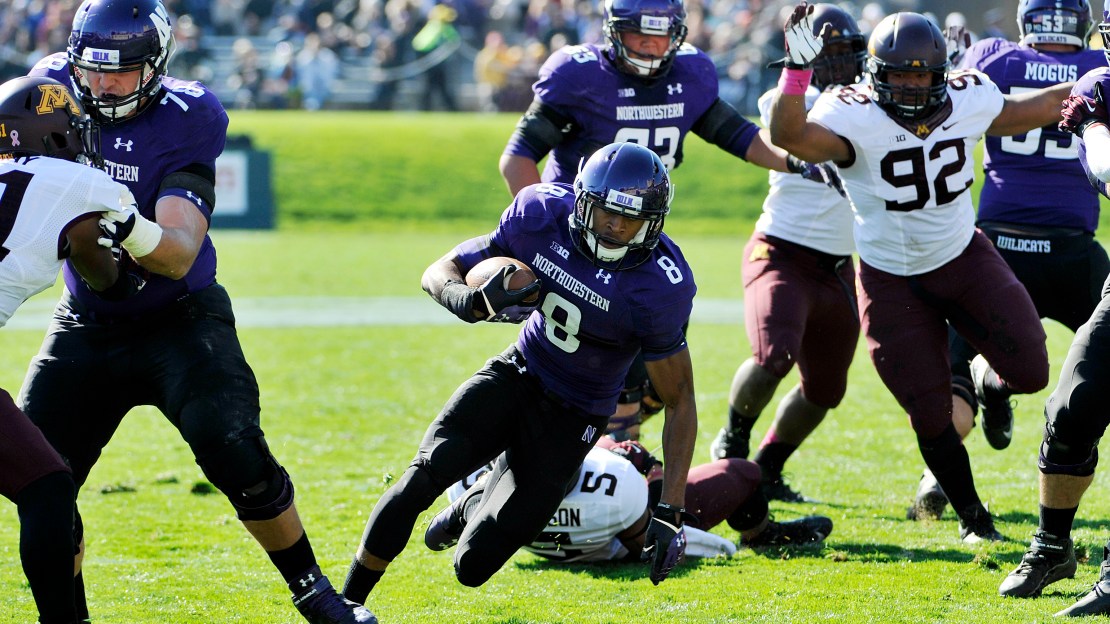 With Ohio State, Wisconsin, Michigan State and Michigan winning-and Nebraska being off-there were no changes to the top of my Big Ten power rankings, presented by ArcelorMittal. But there was plenty of shifting in the bottom half, highlighted (lowlighted?) by Northwestern?s continued descent. It wasn?t long ago that I had the Wildcats No. 2 in the Big Ten. Now? Well, have a look for yourself.

1. Ohio State (7-0, 3-0). The Buckeyes keep on winning, pushing their streak to 19 games. This team doesn?t appear to be dominant in any one area-it?s just very good in a lot of areas. And it?s full of confidence, too.
Last week: 1
Next: Penn State

2. Wisconsin (5-2, 3-1). The Badgers continue to impress with a strong rushing attack and underrated defense. The passing of Joel Stave? Well, it could use some work. Still, this team may not lose again in 2013. Read my Week 8 game column.
Last week: 2
Next: Off; at Iowa, Nov. 2

3. Nebraska (5-1, 2-0). That ugly home loss to UCLA seems like eons ago, doesn?t it? And that Bo Pelini tape ? did it ever really get released? See what winning does for a program? But beware, Huskers: Lots of heavy lifting remains after this bye week.
Last week: 3
Next: at Minnesota

4. Michigan State (6-1, 3-0). Like earlier this season, the Spartans won ugly, as the offense took a step back in the win vs. Purdue. Still, in crunch time, the MSU offense came to life. There is a lot to like about this team.
Last week: 4
Next: at Illinois

5. Michigan (6-1, 2-1). The leaky Hoosiers defense arrived just in time for a struggling Wolverine attack that notched a school-record 751 yards. This was just what the doctor ordered. But should we now be worried about a defense that allowed 572 yards?
Last week: 3
Next: Off; at Michigan State, Nov. 2

6. Penn State (4-2, 1-1). The Nittany Lions last Big Ten road trip resulted in a 44-24 loss at Indiana. Up next: at Ohio State. Penn State has nothing to lose coming off a bye, so it should hold nothing back in trying to ruin the Buckeyes? season.
Last week: 7
Next: at Ohio State

7. Iowa (4-3, 1-2). The Hawkeyes had a halftime lead before giving way to Ohio State in the second half. It was a valiant effort vs. the Big Ten?s best team. Lots of tough games remain (Michigan, Wisconsin, Nebraska), but don?t count out the Hawkeyes.
Last week: 8
Next: Northwestern

8. Minnesota (5-2, 1-2). An inspirational-and perhaps season-saving-win for the Golden Gophers, who won at Northwestern without Jerry Kill behind a physical offense and strong effort from an often-maligned defense.
Last week: 11
Next: Nebraska

9. Indiana (3-4, 1-2). Yes, the offense is great. But, until the defense can become at least average, the Hoosiers will struggle for consistency. But, is there a more fun team to watch in the Big Ten? Of course not.
Last week: 9
Next: Off; vs. Minnesota, Nov. 2

10. Northwestern (4-3, 0-3). That?s three losses in a row for the Wildcats, as the air continues to come out of the tires of a once-promising season. This team once had Big Ten title hopes. Now, will it even make it to a bowl?
Last week: 6
Next: at Iowa

11. Illinois (3-3, 0-2). No shame in losing to Badgers, as Illinois continues to be a work in progress-especially on defense. The offense? It continues to show innovation in moving the ball despite some personnel shortcomings.
Last week: 10
Next: Michigan State

[ MORE: How did we do? Week 8 Big Ten predictions revisited ]

12. Purdue (1-6, 0-3). Yes, the Boilermakers lost again. But quarterback Danny Etling made strides in his second start and the defense had its best effort of the season. If there is such a thing as a ?quality loss,? this was it.
Last week: 12
Next: Off; vs. Ohio State, Nov. 2