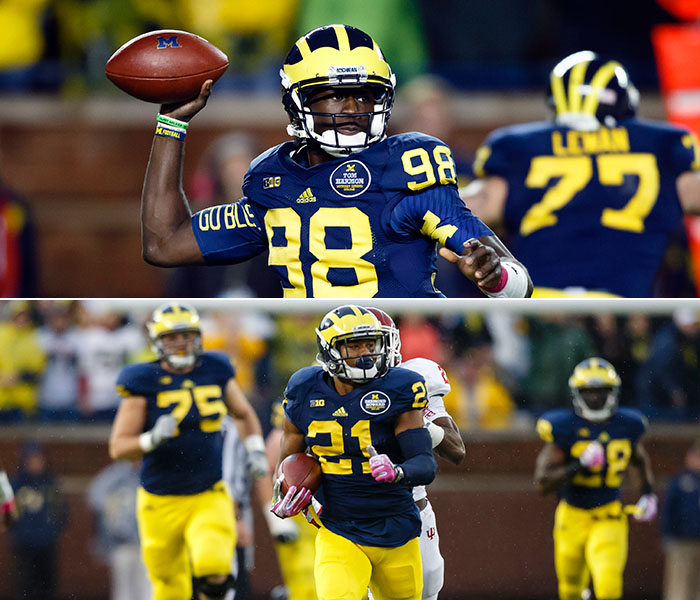 The Michigan Wolverines entered Saturday needing a big day from their offense to keep up with the high-scoring Indiana Hoosiers. In a record-setting performance, quarterback Devin Gardner and wide receiver Jeremy Gallon answered the challenge.

The duo helped the Wolverines set a school single-game record with 751 total yards of offense and extended their nation?s longest home winning streak to 19 games in their 63-47 victory.

On the receiving end of things, Gallon went for a Big Ten-record 369 receiving yards, the second-most in FBS history. He had just 231 receiving yards combined in his last four games.

Gardner spent most of the afternoon looking Gallon?s direction, targeting the senior wide out on 18 of his 29 pass attempts. When throwing to Gallon, Gardner completed 78 percent of his passes and averaged 20.5 yards per attempt, compared to a 64 percent completion rate and averaging just 12.2 yards per attempt to other targets.

Gardner was also effective in play action passing, primarily to Gallon. He completed eight of his 10 pass attempts in play action when targeting Gallon, including two 70-yard completions and a 50-yarder to the senior wide out. Those three plays were more than the two plays of at least 50 yards the Wolverines collected in their first six games combined.

Gardner moves to 9-3 as a starter at Michigan. Looking ahead, the Wolverines have a week off before their matchup against in-state rival Michigan State on November 2.

Watch all of Garner and Gallon's top plays: