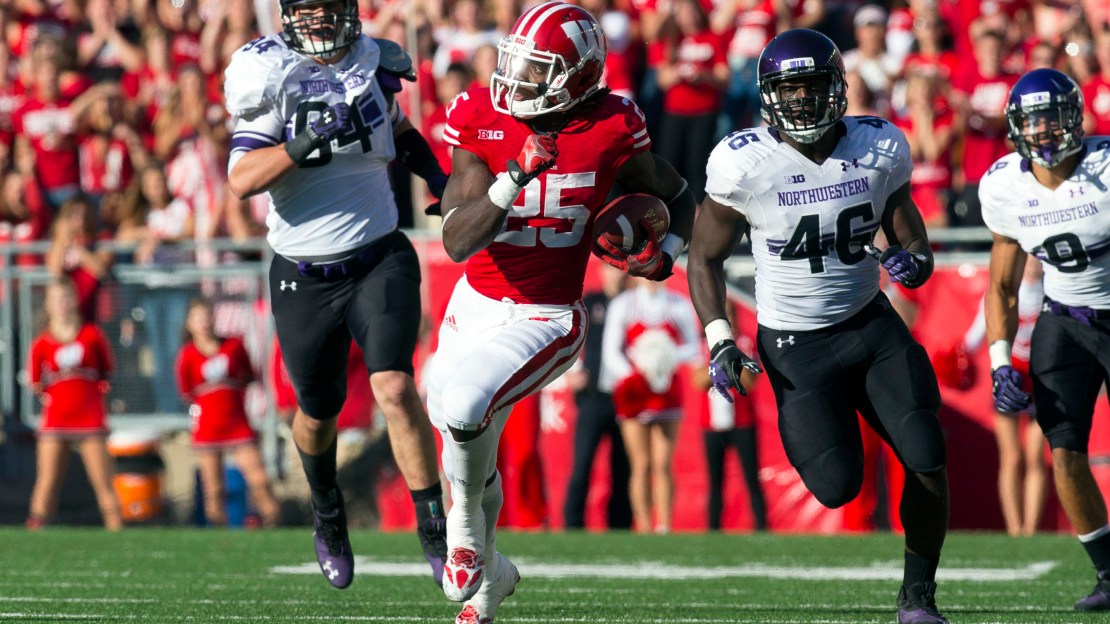 The days are growing shorter, as Halloween draws nearer. It all means one thing: We are at the midseason point of the season. Here?s a look back at what we?ve experienced so far in the 2013 season-and a look ahead at what?s about to come in the season-defining home stretch.

SUPERLATIVE WINNERS OF THE FIRST HALF

Offensive Player of the First Half: Melvin Gordon, RB, Wisconsin. He came into the season with 719 career rushing yards. The sophomore paces the Big Ten with 870 this season, averaging a nifty 9.7 yards per carry with eight TDs. No doubt, Gordon is upholding the great tradition of Badger running backs.

Defensive Player of the First Half: Shilique Calhoun, DE, Michigan State. He has been a general pain in the backside for foes, notching 5.5 TFLs and three sacks. He also has 13 hurries. Stats don?t tell his true value, as offenses have to plan around him. But if you want more, here you go: The sophomore scored three touchdowns the first two games.

Freshman of the First Half: Christian Hackenberg, QB, Penn State. He leads Big Ten quarterbacks in passing yards per game (278.7 ypg) and has 11 touchdown passes with a 58 percent completion percentage. He is gonna be a stud.

Coach of the First Half: Urban Meyer, Ohio State. Yes, he is supposed to be 6-0. But the way Meyer has kept the Buckeyes on track and on task through these massive expectations has been impressive. Also, a tip of the hat to Michigan State?s Mark Dantonio.

OTHER HONORS OF THE FIRST HALF

Most surprising team: Iowa. Honestly, there hasn?t really been a massively surprising team. But the Hawkeyes are 4-2 overall and 1-1 in the Big Ten coming off a 4-8 season. However, the tough part of the schedule looms. Illinois also has surprised with a 3-2 start after going 2-10 in 2012.

Most surprising player: Jake Rudock, QB, Iowa. He won a three-man battle for the job, having never played a snap at Iowa. But the sophomore has been a steady force for the Hawkeyes. He is hitting 60 percent of his passes with eight TD strikes. Ohio State quarterback Kenny Guiton also deserves mention, as he filled in for an injured Braxton Miller and thrived. The senior?s 13 touchdown passes still lead the Big Ten.

Most disappointing team: Purdue. Sure, no one expected miracles or even a bowl game. But no one expected massive blowout after massive blowout, either. Aside for a seven-point loss to Notre Dame, Purdue has lost by 35, 31, 31 and 37 points for an average margin of defeat of 28 points in its five losses. Add it all up, and the Boilermakers are 1-5 with few prospects for another victory.

Most disappointing player: Devin Gardner, QB, Michigan. He got his feet wet last season, making five starts. Much was expected in 2013. Alas, there arguably has been as much good as bad for the junior so far this season. He had people lumping him into the Heisman race after a big effort in a win over Notre Dame in the second game of the season. But Gardner has been plagued with inconsistency and turnovers all season. He has 11 touchdown passes, 10 picks and nine sacks. And there also have been some lost fumbles, too. No doubt, better line play would help Gardner, but he is the focus of the attack.

BEST GAMES OF THE FIRST HALF

Penn State 43, Michigan 40. This was an instant classic, complete with myriad ebbs and flows and four emotionally draining overtimes. Whew! Penn State blew a 21-10 halftime lead before storming back to score the tying touchdown in the dying moments on a play set up by a heave from Christian Hackenberg to Allen Robinson. Each team?s kicker blew golden opportunities to win the game in OT before Penn State seized the moment in the fourth overtime by scoring on a 2-yard Bill Belton run that was set up by a gutsy call to go for it on fourth-and-1 moments earlier instead of kicking a field goal. PSU got the first down and subsequent winning TD.

Ohio State, 40, Northwestern 30. This one lived up to the massive buildup, as the Buckeyes battled back from a 20-13 halftime deficit to claim the win to push their winning streak to 18 in a row. Thank Carlos Hyde, who ran 26 times for 168 yards and three touchdowns.

Michigan 41, Notre Dame 30. Devin Gardner looked like a Heisman candidate, hitting 21-of-33 passes for 294 yards with four touchdowns and an interception. The junior didn?t stop there, running 13 times for a team-high 82 yards and a score.

Arizona State 32, Wisconsin 30. This one was full of yards, points and momentum shifts topped by a controversial ending that robbed the Badgers of a chance to attempt a potential game-winning field goal in the waning seconds.

BEST PERFORMANCES OF THE FIRST HALF

Braxton Miller, QB, Ohio State vs. Wisconsin. After missing almost three games, Miller excelled in a 31-24 win over Wisconsin. He completed 17-of-25 passes for 198 yards with four touchdowns and ran a team-high 22 times for 83 yards.

Shilique Calhoun, DE, Michigan State vs. South Florida. Calhoun scored on an interception return and a fumble return. Good thing, because the Spartan offense was struggling in a 21-6 win vs. the Bulls. Calhoun scored the week before on a fumble return. So, through two games, the 6-4, 250-pound Calhoun was outscoring the offense, three touchdowns to two.

Christian Hackenberg QB Penn State vs. Michigan. The true freshman played like a senior in the wild win over Michigan, hitting 23-of-44 passes for 304 yards with three touchdowns and two picks in a 43-40 four-overtime win vs. Michigan. He also had a huge throw to set up the game-tying touchdown in the waning moments to force overtime. Just spectacular.

TOP STORIES OF THE FIRST HALF

1. Before the season began, we thought the Legends Division race was going to be crazy. Well, nothing has changed. November shapes up as a pivotal month, with all the key schools battling each other: Michigan, Michigan State, Nebraska, Northwestern. This is gonna be fun.

2. Ohio State looked like the class of the Big Ten in August and still retains that title. The Buckeyes are 6-0, riding an 18-game winning skein with no discernible loss on the horizon. The big question: Will OSU have the resume (and help from other schools) to reach the BCS title game?

3. Quarterback stability hasn?t been great across the conference. We already have seen Minnesota, Nebraska, Michigan State, Purdue, Indiana and Ohio State all start at least two different quarterbacks so far. Some because of injury; some because of ineffectiveness by the starter.

4. Bo Pelini came under fire in September with the release of an unflattering recording of the Nebraska coach from 2011 in which he disparaged Husker fans. Pelini survived the firestorm which occurred after an ugly home loss to UCLA, but it had the nation buzzing.

5. Jerry Kill has been the biggest story about Minnesota football. And that?s not good. After suffering two seizures this fall, he recently announced he would step away indefinitely to work on his health. How will this impact the team?

6. Penn State got some huge news from the NCAA when it was announced its scholarship limitations would be softened, brightening what had looked like a dim future.

7. Nebraska struggled mightily on defense in 2012. But, most felt those defensive woes would be fixed in 2013. Alas, some major leaks have cropped up again. Big games loom. How will the D hold up?

8. The Big Ten?s two new coaches are enjoying drastically different experiences. Wisconsin?s Gary Andersen has his team rolling. In fact, it may be the second-best squad in the Big Ten. Purdue?s Darrell Hazell is in the midst of what may be the worst season in school history.

9. Ohio State?s Braxton Miller and Nebraska?s Taylor Martinez were supposed to be the top two quarterbacks in the Big Ten and Heisman contenders. But injury has sullied their seasons so far. Miller missed almost three games with a knee injury suffered early in the second game of the season. Martinez has missed the last three games with a turf toe injury.

10. Where were the big non-conference victories? They really weren't there. The best probably was Michigan's 41-30 win over Notre Dame. And, how good are the Fighting Irish? Exactly.

Michigan at Michigan State, Nov. 2. A huge Legends Division tilt. Before losing, 12-10, last year in Ann Arbor, Michigan State had won four in a row in this oh-so-heated rivalry.

Michigan State at Nebraska, Nov. 16. This could be a de facto Legends Division title game. Can?t wait to watch the MSU defense battle the Nebraska offense.

Michigan State at Northwestern, Nov. 23. This could be a trap-door game for the Spartans, who may be marching toward the Legends Division title. The Wildcats figure to be a dangerous team that may have nothing to lose.

Ohio State at Michigan, Nov. 30. The Buckeyes figure to be unbeaten and possibly in the hunt for a BCS title game berth. And could these teams end up meeting again the next week in the Big Ten title game in Indianapolis?