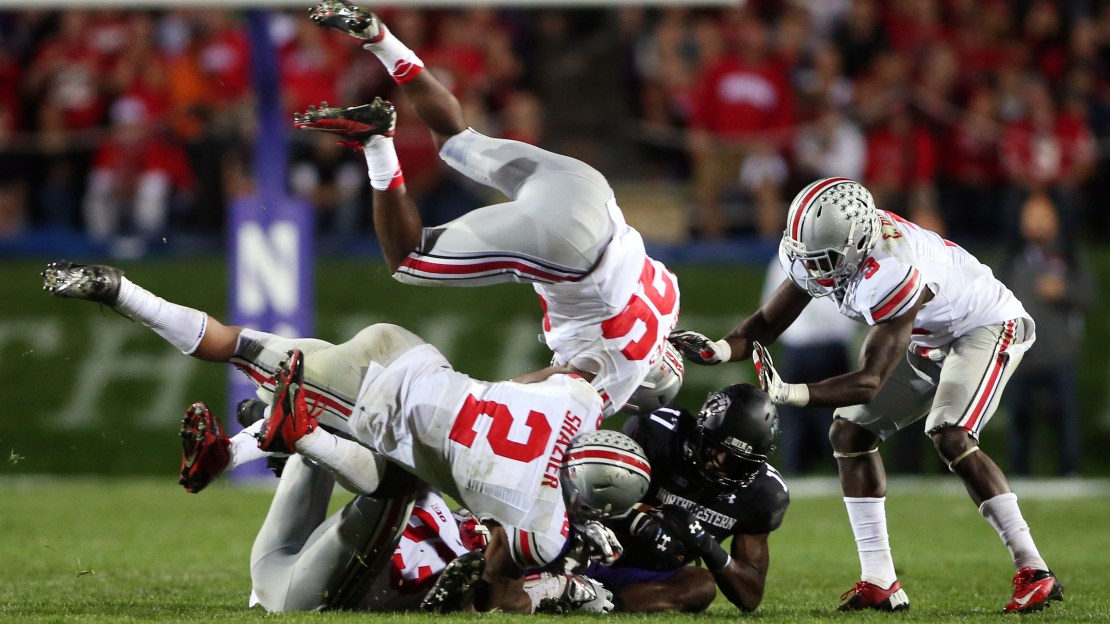 Six weeks are in the books, and Ohio State still sits atop my Big Ten Power Rankings, presented by ArcelorMittal. But pecking order behind the Buckeyes remains in flux as schools continue to jockey to ride shotgun with Ohio State. The big winners this week: Michigan State and Indiana, who happen to also play this Saturday. Here are my power rankings.

[ MORE: Dienhart: Nothing was going to stop OSU on this night ]

1. Ohio State (6-0, 2-0). That?s two terrific wins in a row over arguably the second- and third-best teams in the Big Ten in Wisconsin and Northwestern. The Buckeyes are talented and playing with lots of mojo. Will they lose between now and the Michigan game? Hmmm.
Last week: 1
Up next: Off; vs. Iowa

2. Northwestern (4-1, 0-1). Another big game, another loss for Northwestern, which squandered another second-half lead after doing so in three games last season. The Wildcats have to hope to get another shot at Ohio State in the Big Ten title game.
Last week: 2
Up next: at Wisconsin

3. Michigan (5-0, 1-0). The offense looked better after those spotty performances vs. Akron and UConn. No doubt, this effort in the Little Brown Jug will do wonders for the Wolverines? confidence. The best is yet to come for this developing team.
Last week: 4
Up next: at Penn State

5. Nebraska (4-1, 1-0). For two weeks, the Cornhuskers had to hear about how their defense couldn?t stop a paper cut. And, frankly, it couldn?t. Well, the unit looked pretty salty in sitting on what had been a high-flying Illinois offense. This team may be just fine. And how about that unreal Kenny Bell catch?
Last week: 5
Up next: at Purdue

6. Michigan State (4-1, 1-0). Attention, America: The Spartans may have found a quarterback. His name is Connor Cook. And he?s pretty good. The Spartan offense now has life – it even rattled off its first 40-yard play of the season! Couple a decent offense with an excellent defense, and this MSU team could be scary.
Last week: 8
Up next: vs. Indiana

7. Iowa (4-2, 1-1). The feel-good vibe of that three-game winning skein evaporated in as flash with the home loss to Michigan State. The offense was going to struggle vs. this Spartan defense, but Iowa?s inability to stop a struggling MSU offense was disconcerting. What?s next?
Last week: 6
Up next: off, at Ohio State Oct. 19

8. Indiana (3-2, 1-0). The Hoosiers showed great resolve by rebounding from tough home losses to Navy and Missouri to not just beat Penn State-but to thump Penn State. This team now has a great shot to go bowling for just the second time since 1993.
Last week: 11
Up next: at Michigan State

9. Penn State (3-2, 0-1). If the home loss earlier this year to UCF caused concern for fans, this blowout loss at Indiana should put the Nittany Lion faithful into full-blown panic mode. The defense has issues. And the kicking game ? what?s going on out there?!
Last week: 7
Up next: vs. Michigan

10. Illinois (3-2, 0-1). The Fighting Illini took a step back with this loss at Nebraska. We knew the defense would struggle, but to see the offense floundered vs. a Nebraska defense that had had issues was surprising.
Last week: 9
Up next: Off; vs. Wisconsin

11. Minnesota (4-2, 0-2). A 4-0 start has melted into a 4-2 reality. The offense continues to struggle for big plays and balance. And the Jerry Kill seizure issue certainly doesn?t help matters.
Last week: 10
Up next: Off; at Northwestern

12. Purdue (1-4, 0-1). The Boilermakers were off on Saturday. And they needed the down time to continue to develop new quarterback Danny Etling, as well as tweak the offense.
Last week: 12
Up next: vs. Nebraska