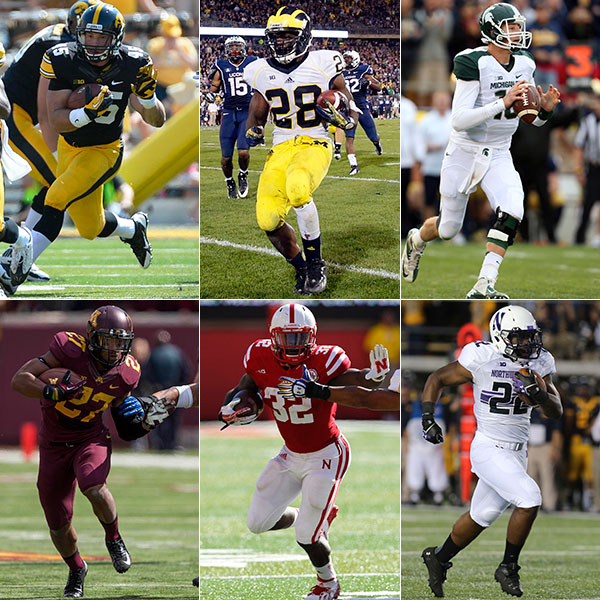 The season is four weeks old, and I?m not sure who is going to win the Legends Division. True, the race looked muddled before the season began, with pundits typically tabbing Michigan or Nebraska to take the banner. But, cases also could have been made for Northwestern and Michigan State. Conversely, the Leaders Division looks like a two-team race between Ohio State and Wisconsin.

Now? Heck, you seemingly could argue that all six teams in the division have a shot as the calendar prepares to flip from September to October. Here is a look at the good and bad for each team in the Legends Division as we take the lid off full-blown Big Ten action.

IOWA
The case for: The defense is coming on, ranking fifth in the Big Ten (290.8 ypg). Credit coordinator Phil Parker. In fact, Iowa is one of two Big Ten teams (Michigan is the other) that haven?t allowed a rushing TD.  The Hawkeyes pace the league in time of possession, thanks to a strong rushing attack that ranks sixth (244.0 ypg). Mark Weisman has been a beast, and the o-line is coming on.

The case against: Quarterback Jake Rudock has been a pleasant surprise. But the passing game needs more juice, ranking eighth (199.2 ypg). Iowa needs to stretch the field to make room for the rushing game. Who are the big-play wideouts? Where is the pass rush? Iowa is last in the league in sacks. The schedule is a bear. Michigan State; at Ohio State; Northwestern; Wisconsin; at Purdue; Michigan; at Nebraska. Other than the trip to West Lafayette, victories may be difficult to come by.

MICHIGAN
The case for: This may be the most talented team 1-85 in the division. And the best-coached, too. But the top talent is still young. The defense continues to improve, as the line is coming on. Wait until star linebacker Jake Ryan returns from injury in October. The schedule is pretty friendly, but games at Penn State, at Michigan State and at Northwestern loom.

The case against: The offensive issues are well-documented (hello, line!) for an attack that ranks just ninth in the Big Ten. Something happened to Devin Gardner on his way to picking up the 2013 Heisman. His decision-making is dubious, and his confidence has to be rocked. And those turnovers! Michigan paces the league with 12.  The defense needs to get a more consistent pass rush.

MICHIGAN STATE
The case for: Defense, defense, defense. It?s the best in America, yielding a scant 188.8 yards per game. Did I mention the Spartans have a great defense? Take a bow, coordinator Pat Narduzzi. The schedule is advantageous. There is no Ohio State, and Michigan comes to East Lansing. Back-to-back November games at Nebraska and at Northwestern figure to tell the tale of the season.

The case against: This offense is the epitome of dysfunction, ranking 11th in the Big Ten (340.8 ypg). Four weeks into the season, and there still seemingly is no answer at quarterback. And the receivers also remain a work-in-progress. Discipline is an issue, as the Spartans have a league-high 27 penalties.

MINNESOTA
The case for: This is a smart, well-coached team that doesn?t beat itself. Exhibit A: This is the least penalized team in the Big Ten (10). Minnesota also has developed a tough, physical reputation on offense with a strong rushing game that ranks third in the league (282.2 ypg).

The case against: This is the worst passing attack in the Big Ten, averaging 105.2 yards per game. Oregon gets that in warm-ups. As the competition stiffens, the Gophers are gonna need some semblance of a passing game to keep defenses off balance. Minnesota has one measly passing TD. Big plays are needed. And the defense also needs more big plays. Any playmakers? The schedule is tough, as the Golden Gophers may be favored in just one more game after this weekend: at Indiana.

NEBRASKA
The case for: The offense is among the best in the conference, displaying good run-pass balance-215.5 passing yards per game/280.8 rushing yards per game. There is an array of skill talent supported by a terrific line. No league school is better at producing turnovers. The schedule also is kind. In fact, Nebraska may be favored in every remaining game except for one: at Michigan. Northwestern and Michigan State go to Lincoln. A trip to Penn State may be dicey.

The case against: The issues on defense never seemingly get fixed. The front seven has talent, but it?s young. The Huskers are 10th in the Big Ten vs. the rush (179.5 ypg). And the unit has a penchant for allowing big plays and missing tackles. Will Taylor Martinez?s toe be a lingering issue? And what is this team?s mindset? The Huskers have been flagged for a league-high 27 penalties.

NORTHWESTERN
The case for: This is one of the Big Ten?s most dynamic offenses with a two-headed quarterback tandem of Kain Colter and Trevor Siemian that?s troublesome on many levels. And skill-position talent abounds, with a loaded corps at running back and receiver. The defense paces the league with 10 picks (four returned for scores). In fact, the Wildcats are No. 1 in the Big Ten in turnover margin.

The case against: The defense has shown some vulnerability. Foes are having success rushing up the middle. And the pass defense? It ranks 11th (307.5 ypg). No school has yielded more passing TDs (8). Can Colter stay healthy? The schedule does the Wildcats no favors.  There are home games vs. Ohio State, Michigan and Michigan State and trips to Wisconsin and Nebraska. No Legends team has a tougher slate.