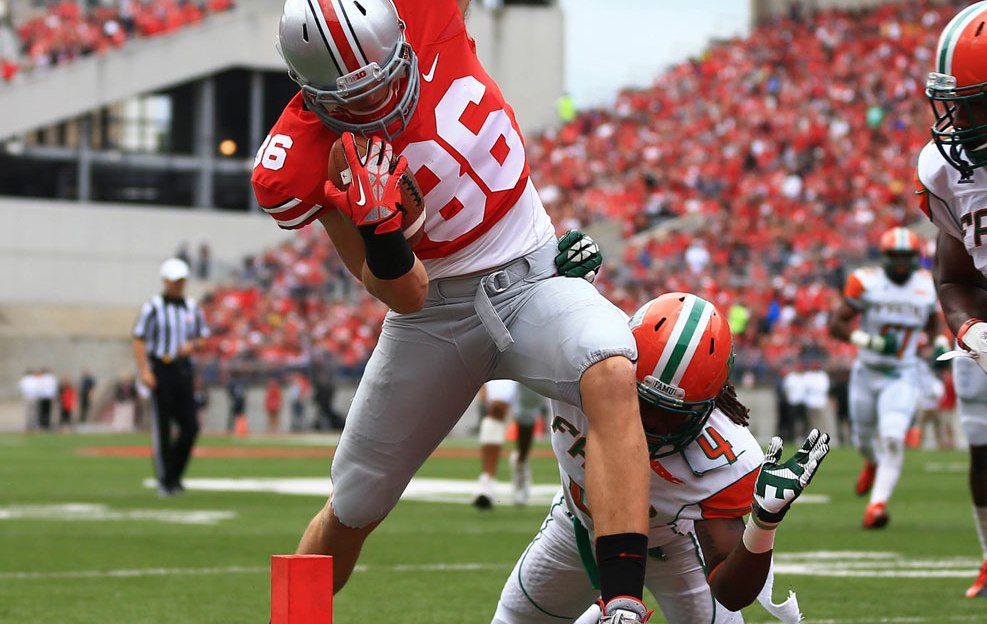 Week Four in the Big Ten is over. And, it was a mixed bag in what was the last big full-blown Saturday of non-conference action. The headliner game was Michigan State at Notre Dame. The Spartans came up short, as the Fighting Irish won despite notching a scant 221 yards in a 17-13 victory.

For the second week in a row, Michigan barely avoided a big upset, sneaking by UConn, 24-21. The day also saw three games vs. FCS foes. And, the Big Ten won all three by an aggregate 170-41.

[ DIENHART: Guiton or Miller? It's a hot debate for OSU ]

Biggest surprise: Iowa. Most felt the Hawkeyes would beat Western Michigan, which was playing its third Big Ten foe. But no one saw Iowa winning, 59-3. Quarterback Jake Rudock continues to play well under center, as Iowa padded its point total with two punt returns and two interception returns for scores.

Biggest disappointment: The Michigan State offense. Turns out that 55-17 win vs. Youngstown State in which MSU had 547 yards was an aberration. The Spartan attack sputtered in a 17-13 loss at Notre Dame, coughing and wheezing to 253 yards. Connor Cook completed just 16-of-32 passes for 136 yards in his second start. The inept offense washed away a great effort by the Spartan defense, which yielded just 221 yards with only 79 allowed on the ground. But four pass interference penalties and a defensive hold call really hurt MSU.

Best play: I have to go with Wisconsin running back James White?s sensational 70-yard touchdown run in the first quarter. White didn?t break just one set of ankles (Anthony Brown), but he broke two (Taylor Richards). That gave the Badgers a 14-0 lead.

Play this again: Michigan 24, UConn 21. No, it wasn?t a thing of beauty. But, it was kind of exciting. The Wolverines trailed, 21-7, but rallied to take the win a week after squeaking by Akron, 28-24. Hey, a win is a win, as Michigan is now 4-0 as it enters a bye week. But this drama vs. weaklings is hard on the heart.

[POWER RANKINGS: Who moved up and who moved down?]

Never play this again: Ohio State 76, Florida A&M 0. This is why Big Ten commissioner Jim Delany wants his league to not play FCS schools. Period. End of story. OSU outgained the Rattlers, 603-79.  FAMU had as many turnovers as first downs (2). I could go on, but you get the picture. Enough said. This was the Buckeyes? biggest margin of victory since a nifty 85-7 whipping of Drake in 1935.

1. All hail Kenny Guiton. The world?s greatest backup quarterback hit 24-of-34 passes for 215 yards with six touchdowns and a pick in a 76-0 waxing of Florida A&M. That?s 16 wins in a row for Urban Meyer to start his career. Only one coach in the BCS era has started his tenure at a school with a longer winning streak than Meyer: Larry Coker at Miami (2001-02, 24 in a row).

2. Iowa?s versatility. The Hawkeyes scored on punt returns, interception returns, a pass and a rush. Not bad. Kudos to Iowa cornerback B.J. Lowery, who ran back two picks for touchdowns, 35 and 13 yards.

3. Penn State quarterback Christian Hackenberg is human after all. He hit just 13-of-34 passes for 176 yards with a touchdown and pick. It was by far his poorest numbers of the season. Still, the Nittany Lions won, 34-0, vs. Kent State. That?s all that mattered, as PSU used a strong ground game that churned out 287 yards rushing.

4. Yellow flags. They were everywhere on Michigan State, which had 10 penalties for 115 yards in a 17-13 loss at Notre Dame. Time and again, the Fighting Irish threw deep. Time and again, the Spartans got flagged. The Spartans were hurt most by four pass interference calls and a defensive holding penalty that all kept ND drives alive. By the way: Big Ten officials worked the game.

5. Northwestern picks. The Wildcats intercepted two passes, running both back for touchdowns as Damien Proby and Dean Lowry each did the honors. NU now has 10 interceptions in four games this season.

6. Gritty Gophers. Nothing fancy here. Just good old-fashioned three-yards-and-a-cloud-of-dust offense that would make Bronko Nagurski proud for Minnesota in a 45-24 win over San Jose State. The Gophers pounded the Spartans for 354 yards rushing on 67 carries.

7. Backup quarterbacks. Ohio State (Kenny Guiton), Nebraska (Tommy Armstrong and Ron Kellogg) and Minnesota (Mitch Leidner) had to use reserve quarterbacks because of injuries to starters. And all excelled in leading their teams to victory.

8. Nebraska fans. Yes, Bo Pelini was caught on a recording saying some derogatory things about Husker fans. But there still was lots of love for Pelini on Saturday. I can?t say I?m too surprised. Some nice signs of support: If you don't stand behind Bo, don't stand here.

9. Michigan?s offense has issues. The Wolverines managed just 286 yards vs. a UConn team that lost earlier this year to FBS Towson State. Devin Gardner?s struggles continue, as he hit just 12-of-25 passes for 99 yards with no touchdowns, two interceptions and four sacks.

1. Throughout the preseason, Dontre Wilson was the true freshman skill player that got all the attention for Ohio State. Well, true freshman Ezekiel Elliott stole the show today with 162 yards rushing and two scores, averaging 11.6 yards per tote. The kid is going to be good.

2. Iowa waited five years to get a punt return for a touchdown. Well, it got two today in a span of 59 seconds on back-to-back punt returns by Kevonte Martin-Manley, who raced 83 and 63 yards to pay dirt in a 59-3 Hawkeyes win.

3. Wisconsin running back Melvin Gordon continues to wow. He burned Purdue for 147 yards rushing on 16 carries, averaging a nifty 9.2 yards per carry with three touchdowns.

5. Minnesota quarterback Mitch Leidner was almost a one-man gang vs. San Jose State. Yes, he hit just 5-of-13 passes for 71 yards. But he did his damage on the ground with 23 carries for 122 yards and four touchdowns in a 43-24 win.

5. Interceptions for Michigan quarterback Devin Gardner the last two games. In those two games, Gardner has hit 28-of-55 passes for 347 yards with two touchdowns, five interceptions and five sacks.

8. Wins in a row for Wisconsin over Purdue.

Wisconsin at Ohio State. Wisconsin?s trip to Ohio State figures to be a de facto Leaders Division title game. The Buckeyes have won five of the last six meetings and look to be the prohibitive favorite to win not just the Leaders Division-but maybe the Big Ten and national championship. Wisconsin hasn?t won in Columbus since 2004.

Iowa at Minnesota. The Hawkeyes won last year?s meeting in Iowa City, 31-13, and have won four of the last six in the battle for Floyd of Rosedale. But the Golden Gophers won the two previous meetings (both in Minnesota) prior to 2012 and have won three of the last four in Minneapolis.