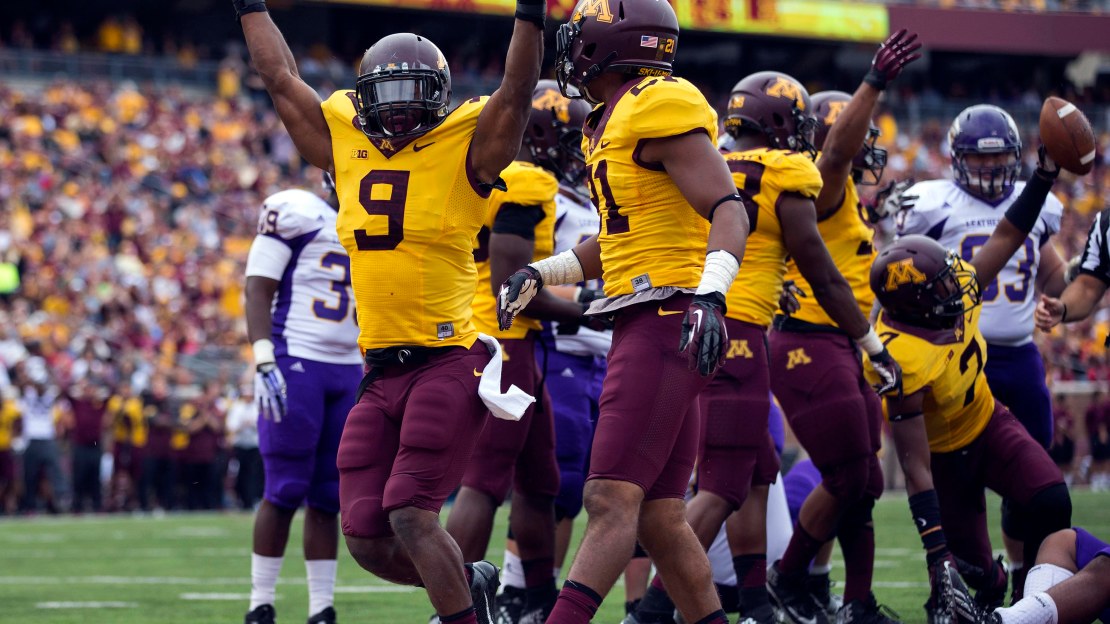 Week 3 was a mixed bag for the Big Ten, which went a disappointing 7-5, including a 1-3 mark vs. the Pac-12. And, in some ways, it seemed fitting the end to a bizarre Saturday was capped by a finish to the Wisconsin-Arizona State game that still has my head spinning. Here is a look around the Big Ten?s third week of action.

Biggest surprise: Honestly, there was no surprise. At least there was no pleasant surprise. OK, I had some doubts if Indiana (Bowling Green) and Iowa (Iowa State) would win, but each prevailed in games some felt each had to win in hopes of becoming bowl eligible. Mission accomplished.

Biggest disappointment: Michigan would be a terrific choice. But, let?s go with Nebraska, which famously flopped in its attempt to show UCLA who was boss. True, the Huskers allowed ?only? 504 yards after yielding 653 last season in a 36-30 loss at UCLA. But, the result was the same: A lopsided loss. Nebraska raced to a 21-3 lead-then was outscored 38-0 the rest of the game in a 41-21 defeat. While the defense struggled, the Huskers offense also must shoulder blame. Nebraska had just 331 yards with only 128 on the ground (3.0 ypc). Oh, well. This may be the best team Nebraska plays all season.

[ MORE: Dienhart: "This was a big step back" for Nebraska ]

Best play: It wasn?t by a Big Ten player. It was by a guy from-of all places-Bowling Green. Late in the first quarter, Paul Senn screamed in on Indiana punter Erich Toth and literally took the ball off his toe. And Senn didn?t stop there, racing 44 yards for the Falcons? lone TD of the game. I?ve never seen anything like it.

Play this again: Notre Dame 31, Purdue 24. Honestly, who out there really thought this was gonna be close? Well, it turned out to be a terrific game. The Boilermakers led 17-10 entering the fourth quarter before the Fighting Irish asserted their will and outscored Purdue 21-7 in the fourth quarter. This is an effort that first-year coach Darrell Hazell can build off.

Never play this again: Michigan State 55, Youngstown State 17. This one had all the drama of a ?Roadrunner? cartoon. But, hey, kudos to the Spartans for enjoying a laugher. They needed it.

1. Michigan needs more production from the running game. Yes, there were 185 yards rushing. But take a closer look. The tailback spot, in particular, needs to step up, as the Wolverines had just 74 yards rushing from that spot. Fitz Toussaint had 18 carries for 69 yards (3.8 ypc). This must improve, because Devin Gardner doesn?t appear capable of carrying the team as a passer.

2. Indiana?s chrome helmets. One word: wow. If I had one of those, I?d wear it to bed and in the shower.

3. Nebraska?s defense got a lot of blame on Saturday in a 41-21 loss to UCLA, allowing 504 yards and 38 unanswered points. Fair enough. But the offense also came up short with only 323 yards and no second-half points.

4. Michigan State does have an offense! The Spartans beat Youngstown State, 55-17, after scoring a combined 47 points in the first two games. For the record, the MSU offense is now outscoring the defense, nine touchdowns to four.

5. Jerry Kill?s health. It took a while, but Minnesota subdued FCS Western Illinois, 29-12, behind a physical ground game to move to 3-0. But that wasn?t the story. Rather, it was a seizure suffered by Kill at halftime. It was the fourth time since he became Gophers coach in 2011 that Kill suffered a seizure on game day. Kill was taken to the hospital and later released.

6. Kenny Guiton. The Ohio State backup quarterback is basically a starter. And he also is the early leader for team MVP honors. He came on in the San Diego State game last week when Braxton Miller got hurt and started the tilt at Cal. Heck, I?d start Guiton Saturday vs. Florida A&M. Ohio State could start the tuba player and beat FAMU. Rest Miller.

7. Pac-12 officials in the Wisconsin at Arizona State game. C'mon, guys! Joel Stave took a knee, but he should have handed the ball to an official instead of placing it on the ground. His bad. Still, officials should have put time back on the clock after the ASU player fell on the ball, as Wisconsin wanted to stop the clock and set up for a potential 32-yard. What a shameful ending.

8. Penn State defense. It was bad. It got whipped for 506 yards of offense by Central Florida in a 34-31 loss. UCF ran for 218 yards and passed for 288. The good news: The Nittany Lions won?t see many more offenses as good as the Golden Knights? unit.

9. Iowa beat Iowa State-finally. The Hawkeyes had lost the last two to the Cyclones. But Iowa took a 27-21 win in Ames. That makes Kirk Ferentz 7-8 vs. Iowa State. But more importantly, the Hawkeyes seized a must-win and could be 4-1 when Michigan State comes to Iowa City on Oct. 5.

10. Is Northwestern the best team in the Big Ten? Hmm. The Wildcats moved to 3-0 with a convincing 38-17 home win over Western Michigan. Next is a visit from FCS Maine. No doubt, Northwestern should be 4-0 when Ohio State comes to Evanston on Oct. 5. Has any Big Ten team been as consistently good as the Wildcats so far? Nope.

1. Connor Cook, QB, Michigan State. In making his first start, Cook tossed four touchdown passes en route to hitting 15-of-22 passes for 204 yards. That was the first time a Spartans signal-caller threw four TDs in a game since 2005. Keep it up, kid.

2. Mark Weisman, RB, Iowa. Weisman is Jewish but still opted to play today on Yom Kippur. Good thing for the Hawkeyes, as the bullish Weisman ran 35 times for 144 yards.

3. Kenny Guiton, QB, Ohio State. Not a bad first start, huh? Actually, Guiton was terrific, from start to finish, as Braxton Miller's backup. His first pass went for a 90-yard score, the longest play from scrimmage in Ohio State history, and he and the Buckeyes offense never let up in a 52-point effort at Cal.

4. Nate Sudfeld, QB, Indiana. He seemingly has solidified the starting job in Bloomington with another strong effort, hitting 17-of-26 passes for 336 yards and two touchdowns.

T-5. Mitch Leidner, QB, Minnesota. When Philip Nelson went down with injury in the first half, Leidner came on to hit 7-of-8 passes for 105 yards. He also ran 17 times for 64 yards. Not spectacular, but solid and turnover free to help the Gophers come back and beat pesky Western Illinois and move to 3-0.

T-5. Taylor Lewan, OT, Michigan. Why is he on this list, you ask? Because he said this: "This is embarrassing for the University of Michigan football team." Love the honesty. He came back to win the Big Ten. Not barely beat ? Akron.

50. Percent of passes completed by Joel Stave (15-of-30). Not good. And he also had just 6.2 yards per attempt. Wisconsin needs more from its passing game.

4. Turnovers for Michigan quarterback Devin Gardner. He lost a fumble and had three interceptions, one of which was returned for a touchdown.

9. Completions vs. 25 attempts for 156 yards with a touchdown, interception and four sacks for Illinois quarterback Nathan Scheelhaase. In the first two games, Scheelhaase threw for 416 and 312 yards with a combined 54 completions.

7. Touchdowns scored by the Michigan State offense. The Spartans entered the game with two offensive touchdowns.

328. Rushing yards for Northwestern vs. Western Michigan. Venric Mark hasn?t played the last two games while dealing with injury. No problem, as Treyvon Green and others have given the Wildcats one of the Big Ten?s most effective and physical rushing attacks Green ran 20 times for 156 yards and two TDs vs. WMU.

Michigan State at Notre Dame. The Spartans are 3-0, but it?s a flimsy 3-0. This will be a huge test for the MSU offense. The Spartans have lost two in a row to ND. And MSU has been outscored 51-16 in the process.