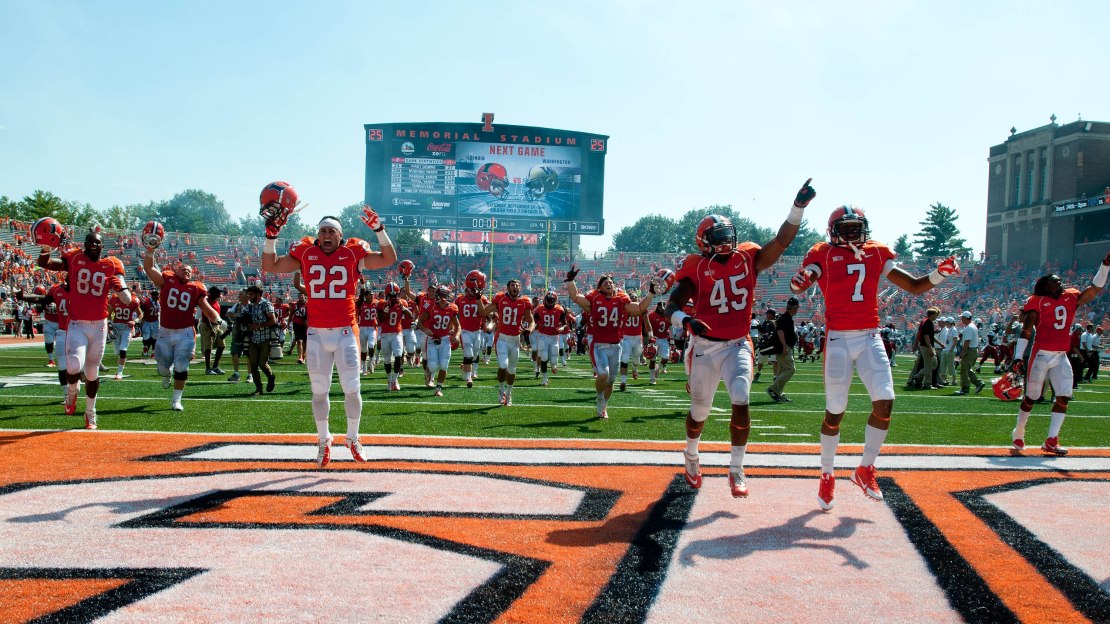 We have two weeks in the books, and teams continue to jockey for position in my weekly power rankings, presented by ArcelorMittal. Here is how I stack the Big Ten schools following two weeks of action. Keep an eraser handy.

1. Ohio State. The good news, the Buckeyes rolled. The bad news, Braxton Miller got hurt, but we are told his left will be OK for next week?s trip to Cal. I hope so. Oh, that?s 14 wins in a row for Ohio State, the longest winning streak in America.
Last week: No. 1
Up next: at Cal

2. Michigan. Ladies and gentlemen, meet Devin Gardner, the Wolverines? next great quarterback. After carrying Michigan to victory over Notre Dame, should he be in the Heisman race? By the way: What ever happened to Denard Robinson?
Last week: No. 2
Up next: vs. Akron

3. Northwestern. Kain Colter, Trevor Siemian, it doesn?t matter who takes snaps in Evanston. Each is awesome. This offense is operating at full force. And the Wildcats didn?t even have star running back Venric Mark, who was out vs. Syracuse with injury.
Last week: No. 3
Up next: vs. Western Michigan

4. Nebraska. The defense yielded only 284 yards on Saturday. Yes, Southern Miss is bad, losers of 14 in a row which is the longest skein in the FBS ranks. But who cares? This is just what the Cornhuskers needed a week after allowing 602 yards to Wyoming.
Last week: No. 4
Up next: vs. UCLA

5. Wisconsin. The Bill Snyder Memorial portion of the schedule is over for the Badgers, who have blasted UMass and Tennessee Tech to the tune of an aggregate 93-0 score. Now, the serious stuff is about to start. Is Wisconsin ready? (I?m shrugging my shoulders.)
Last week: No. 5
Up next: at Arizona State

6. Penn State. Christian Hackenberg threw for over 300 yards in just his second career start. How good is he going to be? Don?t sleep on this team, which can be a big-time spoiler this season with games vs. Michigan, Ohio State, Wisconsin and Nebraska.
Last week: No. 6
Up next: vs. UCF

7. Illinois. Meet the Big Ten?s early entrant for ?Cinderella? team. No school surprised more this week than the Fighting Illini, which took apart Cincinnati. The offense is clicking under new coordinator Bill Cubit. Oh, and Illinois already has matched last year?s win total.
Last week: No. 11
Up next: vs. Washington (at Soldier Field)

8. Michigan State. The latest episode of ?Who Will Be the Spartans Quarterback?? provided no more clarity. So, the questions about signal-callers that Mark Dantonio hates so much to answer will persist for another week.
Last week: No. 6
Up next: vs. Youngstown State

9. Minnesota. The Gophers special teams are rolling. One week after bringing a kick and a blocked field goal back for six points, Marcus Jones took a punt 65 yards to the house. It also was nice to the Gophers get physical with 342 yards rushing. And Minnesota did this without top tailback Donnell Kirkwood, who was out with injury.
Last week: No. 9
Up next: vs. Western Illinois

10. Iowa. The Hawkeyes didn?t dominate a FCS foe like it should have. And the offense looked spotty. Regardless, Iowa just needed to taste victory. And did. Congrats.
Last week: No. 10
Up next: at Iowa State

11. Indiana. The euphoria from that 73-point effort in the opener vs. Indiana State? It has vaporized. In fact, it seems like it happened eons ago. But, it looks like Nate Sudfeld may have shown he is the Hoosiers? top signal-caller.
Last week: No. 8
Up next: vs. Bowling Green