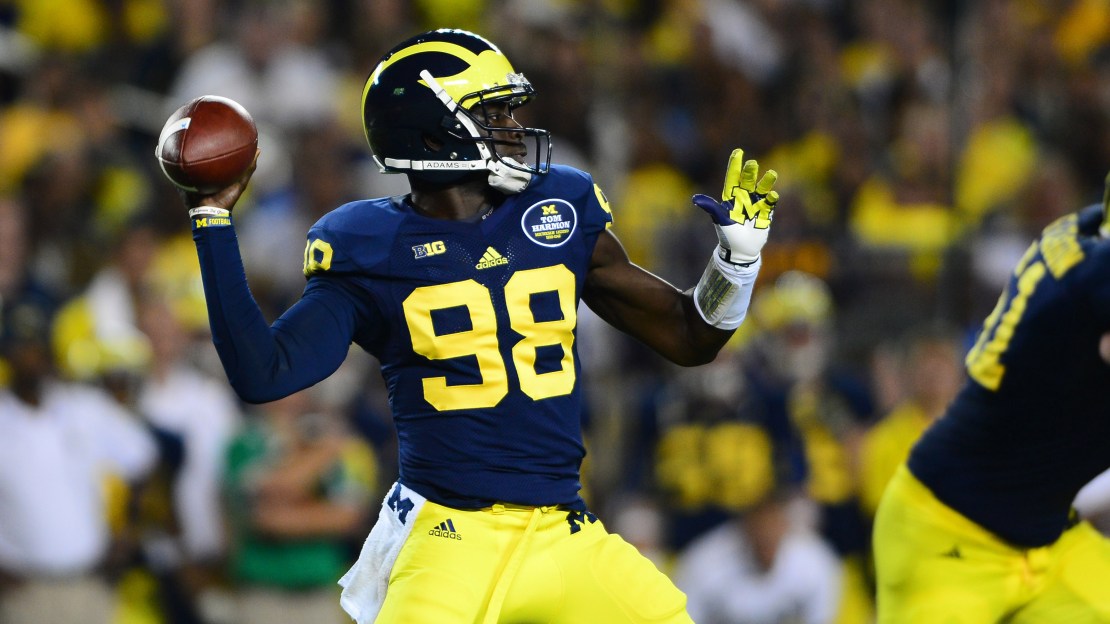 Ever see a quarterback wear No. 98? No, of course, you haven't. Until now, that is. Michigan quarterback Devin Gardner rocked the number typically reserved for defensive lineman vs. Notre Dame on Saturday night, and he will do so for the rest of his career. Gardner, who used to wear No. 12, will wear No. 98 to honor Tom Harmon, Michigan's first Heisman Trophy winner.

[ MORE: Track Notre Dame at Michigan | Check out this gallery of Michigan Stadium ]

Michigan honors its legends by having select current players wear their numbers, in addition to a Michigan Football Legend patch over the left upper chest. It's not a new practice, as Desmond Howard's No. 21 has been worn by a few receivers, including Jeremy Gallon this season.

But a quarterback donning No. 98 takes some getting used to. Don't believe me? Check out some of these tweets.

Michigan has the best QB that wears 98 in the country. Take that SEC.

Why do I keep seeing Dennis Rodman when I look at Devin Gardner in that 98 jersey?

Also, they smoked on the field RT @PaulMyerberg: 1940: When men were men, and quarterbacks wore No. 98.

@CatoJune man what is #gardner doing wit that #98 on?!?!?! #hotmess #Michigan #NotreDame

Love it. Seeing a QB-especially a running QB-wear #98 is going to be pretty cool, albeit a little strange.

Pretty sure Michigan will have the only No. 98 at QB in the country. Devin Gardner will wear it. Wonder if the extra numbers slow him down?