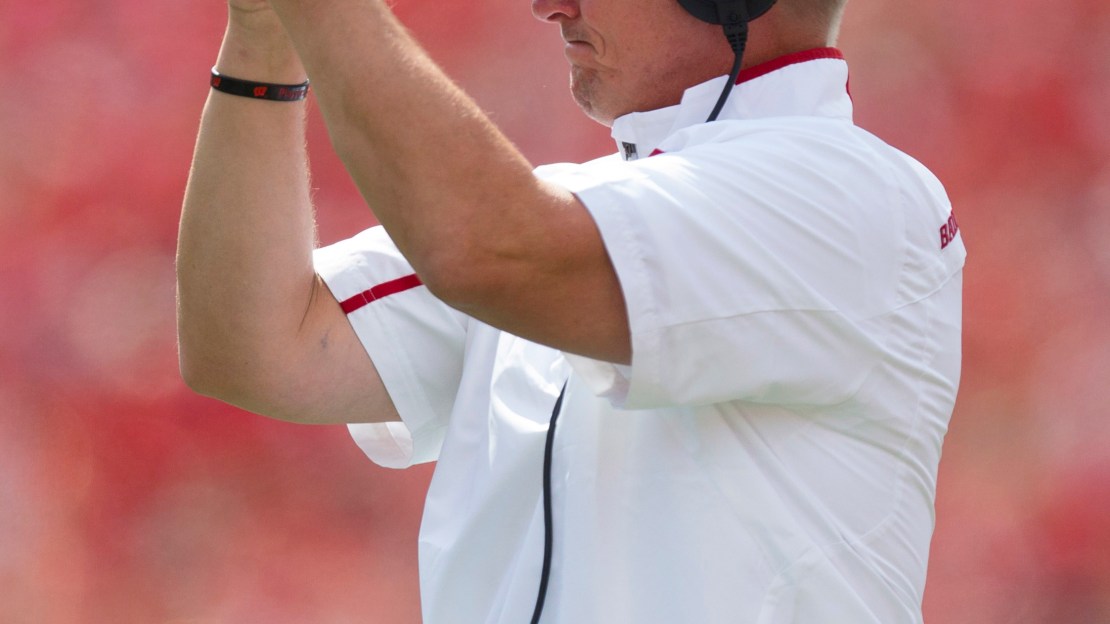 MADISON, Wis. – Coaches usually want to get the first game behind them. Wisconsin?s Gary Andersen was no different. The Jitters, the unknown. Just get here and get over. Now. This not only was the first game of the 2013 season-it also was his first game as Badgers coach.

"Please Saturday come here as fast as possible," Andersen said leading into this game. ?It's just time. I am absolutely excited about the opportunity to take the field with this crew and watch them go to work and I know they're excited about it.

"It's going to be fun. That's one of the big reasons why you coach is to see the young men go out and have fun playing the game of football."

By the time the fourth quarter rolled around, those still in Camp Randall were having a ball. It was a Badgers runaway, as history will show Andersen was a winner en route to taking a 45-0 triumph over UMass following a sloppy first half.

Jitters? The Unknown? Over. Finished.

"Today was the first game," Andersen told the AP. "It was sort of special to me and will be forever."

So, the baton officially has been passed from Wisconsin A.D. Barry Alvarez to Andersen, who is off and running with a Wisconsin program that has been the bellwether of the Big Ten in recent seasons.

This is still Alvarez?s program-and always will as long as he sits in that big corner office as Wisconsin?s athletic director. The godfather of Wisconsin football was stunned-along with the rest of the state-when Bret Bielema ditched the Badgers for Arkansas after last season?s Big Ten championship game.

Hey, everyone needs a new challenge. And Bielema had done a lot since following Alvarez as head coach in 2006, taking the Badgers to three Rose Bowls while maintaining a high standard. But, a move to Arkansas was lateral-at best. In fact, winning the SEC West is infinitely more difficult than winning any division in the Big Ten.

Why leave this nirvana in Dairyland?

Regardless, this isn?t about Bielema. That page has been turned by Alvarez, who responded by tabbing Andersen from Utah State. And it looks like a perfect fit.

Andersen is a ?West? guy, but he possesses qualities that fit this school and this state. He?s a blue collar coach with an endless work ethic who brought his Utah State team to Madison last season and almost beat the Badgers. Now, he?s leading the Badgers.

Andersen will have plenty of teaching points after today?s game in steamy Madison. The offense went in fits and starts early on, which was a bit of a surprise. That was the side of the ball that had undergone little change with the new regime. The attack is still built around a physical rushing attack. And it eventually got on track behind the running of Melvin Gordon (144 yards), James White (143) and Corey Clement (101).

"Their running game has been honed over two decades,? said UMass coach Charley Molnar. ?Recruiting a certain profile, offensive lineman, running back, tight ends, you honestly, you could've been watching 1992 or 1988 Badgers with Coach (Barry) Alvarez with the same plays, just different guys doing the same things. They have a good grasp, I think their coaching staff did a very good job on offense of maintaining continuity within the system. I don't know what terminology they're using, but those guys felt very, very comfortable running that offense today."

Watch all of Wisconsin's top plays (and read more below video):

Good thing the ground game thrived, because quarterback Joel Stave was off his game, especially early on. The Badgers ranked last in the Big Ten in passing last season. That needs to improve-and still does after today?s showing.

Stave won a protracted quarterback battle with Curt Phillips for the job. Why? Because Stave was the better passer last season before a broken collarbone sidelined him and Phillips took over.

But Stave was spotty. At halftime, he had hit just 4-of-11 passes for 36 yards with a pick. But the sophomore eventually settled down, completing 9-of-17 passes for 197 yards with two touchdowns, both of the long variety to Jared Abbrederis, and a pick in leading Wisconsin to a big victory.

The defense? It looked sharp behind coordinator Dave Aranda, one of the best young coaches in the business. Aranda installed a new 3-4 scheme that is built on being aggressive. And, it looked good today. UMass had just 212 yards in getting goose-egged.

Up next for Wisconsin is a visit from FCS Tennessee Tech. But then there?s a trip to Arizona State that will be a huge test-especially for the defense. But the Sun Devils can wait. Today was about taking the lid off the Andersen era. And, it was a rousing success.