Dienhart: My reaction to Thursday's wins 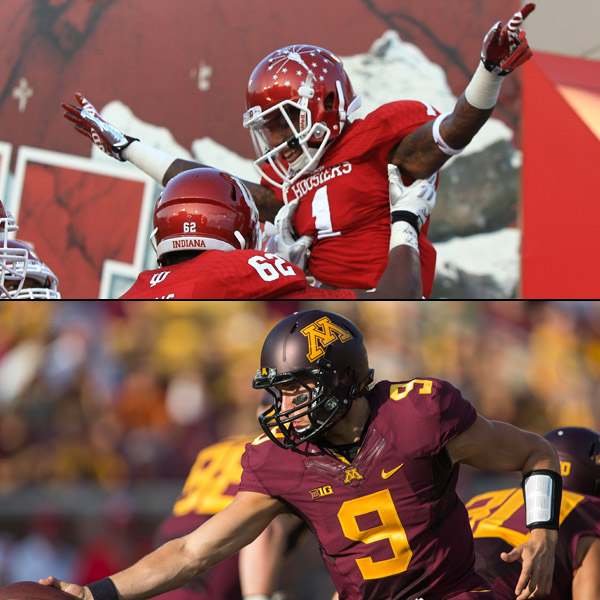 The season is off and running in the Big Ten, with Minnesota and Indiana taking big, impressive triumphs. Indiana drilled Indiana State, 73-35, and Minnesota put away UNLV, 51-23. Here are some of my thoughts on the Big Ten's opening two games of the season.

A win is a win is a win, right? Right? Right. History will show Minnesota topped UNLV, 51-23. But it wasn?t impressive. The offense went in fits and starts. QB Philip Nelson was spotty as a passer, hitting just 10 for 22 passes for 99 yards with a touchdown and pick. He did run for 83 yards and two touchdowns.

Still, Minnesota needs more from an offense that scored 17 or fewer points in eight games last season. Specifically, Nelson needs to pass better, which made it tough to get a read on a receiving corps that?s on the spot. And the defense doesn?t get off the hook, allowing 418 yards. But, it?s just the first game of the year. There?s plenty of time.

The Minnesota offense and defense needs to send a ?Thank You? note to the special teams. The Gophers scored on a 98-yard kickoff return (Watch!) and a blocked field goal (Watch!). Without that, this game would have been very scary.

The Minnesota defense also chipped in with a TD on an interception return (Watch!). That?s 21 ?unconventional? points for the Gophers. You are going to win a lot of games like that. But, Minnesota obviously can?t count on that type of production each week.

So, Minnesota is 1-0. Let?s peek ahead. The Golden Gophers play at New Mexico State and come home to play Western Illinois, San Jose State and Iowa. Could Minnesota be ? 5-0 when it travels to Michigan for the Little Brown Jug game on Oct. 5?

Indiana?s offense looked to be in midseason form vs. FCS Indiana State, notching a 73-35 win. Impressive. The scores came fast and furious, as Indiana tallied its most points since 1901 and its second most in school history. How easy was it for IU? The Hoosiers scored 42 points in the first 19 minutes. Not a big shock, as this Hoosiers offense should be one of the best in the Big Ten. Still, I didn?t see 73 points coming.

Indiana RB Tevin Coleman looked good, rushing for 169 yards and two scores (Watch TD No. 1! | And No. 2! ). When I saw him in training camp, he looked like the team?s top back. This is more proof. The kid is good. Yes, this was just a FCS team, but at least Indiana dominated it like it should have.

How about Indiana?s Ted Bolser? Is there a more underrated tight end in America? I think not. He?s primed for a big year, beginning with this six-catch, 78-yard effort with two touchdowns (Watch TD No. 1! | And TD No. 2!).

Next up is a visit from Navy, in what?s one of the most pivotal games of the season. Beat the Midshipmen-who took a 31-30 win vs. Indiana last season–and the Hoosiers could be off and running toward a 4-0 start for a team that has eight-count ?em EIGHT-home games.