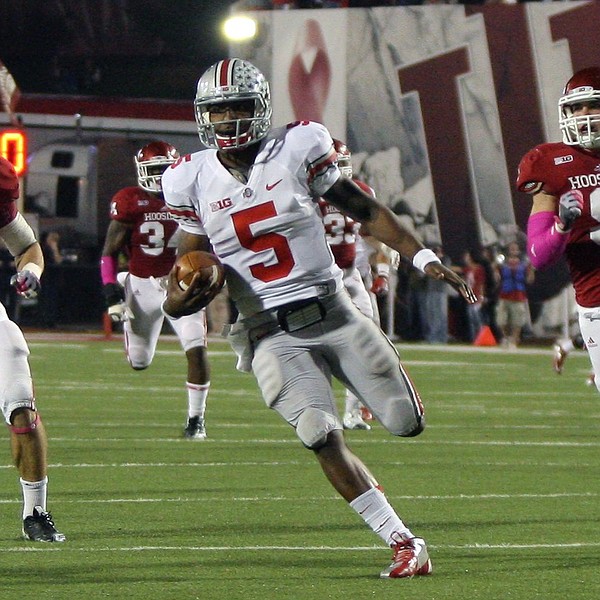 The BTN bus is rolling through Big Ten territory, checking out training camps at each school during the Network?s annual tour. Lots to see. And, by the volume of mail, I can tell there is a lot of anticipation from fans. With that, I reach into my mail bag and answer your questions. Keep those cards and letters coming! I appreciate it.

I live in Alabama but formerly am from Columbus, Ohio. Go Bucks!! I think we will make it to the title game if we can avoid injuries and the team plays like it wants to win. But I don?t like our schedule. It?s weak. Your thoughts? – Jack

There is a lot to like about Ohio State. The offense is especially loaded. When we watched practice earlier in the week, it was difficult not to be impressed with true freshman running back Dontre Wilson. The guy has deadly speed and could be a difference-maker-something OSU lacked at running back in 2012. And I think the defense will be better than it was last year, especially in the back end. Yes, the schedule is soft, so the Buckeyes likely will need to run the table, as even one loss figures to doom OSU?s BCS chances.

I see the Buckeyes winning only nine games this year–if they are lucky!! – Kevin Benn

I guess it could happen, but I am a bit more optimistic than you. Here are my Best Case/Worst Case for the Buckeyes this season.

My worst case was a 9-3 overall mark, with losses coming at Northwestern, vs. Penn State and at Michigan. Still, the Buckeyes would have to struggle in several areas for this to happen. And I just don?t think Urban Meyer will let that happen to his Buckeyes. The young talent on the defensive line looks special, and the secondary may be the best in the Big Ten. The offense? It?s loaded and led by the league?s best player in Braxton Miller. The flaws? Depth on the offensive line is dicey, and the linebackers need to develop. Also, is touted freshman Dontre Wilson the answer to big-play needs?

I am an IU man; I bleed Cream & Crimson. But I think Rob Henry is the right guy for the quarterback spot at Purdue. He is one heck of an athlete, has a good arm, even better feet and is a smart young man. – Al Pittman

Great points across the board. Physically, there is a lot to like about Henry. Plus, he?s a senior with starting experience-and he?s bright, as you say. That combination of skill and experience may be just what this Purdue offense needs, as playmaking ability at the skill spots is up in the air. Henry?s skill set would allow him to make something out of nothing, which wouldn?t figure to be as easy for true freshman Danny Etling and redshirt freshman Austin Appleby.

Let me be the first to say that I think new Purdue coach Darrell Hazell will rip off nine wins just like Joe Tiller did in his debut in '97, when he led the Boilermakers to a big victory over Notre Dame and then to a triumph in the Alamo Bowl vs. Oklahoma State. – Joe Boiler

I like your optimism! But Hazell has a few things working against him in his debut season. No. 1, the Boilers have a tough schedule. Nebraska, Notre Dame and Ohio State are at home. And there are games at Cincinnati, at Michigan State, at Penn State and at Wisconsin. No. 2, Purdue is a bit short on talent at the skill spots. And the defense has a lot to prove at the linebacker slot. But give Hazell time; he has a nice start with recruiting and a staff to take advantage of it.

Here are is my Best Case/Worst Case for Purdue this season.

Why do you pick Minnesota to beat Iowa even in a worst-case scenario for the Golden Gophers? Iowa beat the Gophers in Iowa City last year pretty easily and then went to Michigan State and won. Yes, Iowa lost in Minnesota the last two times it visited the Gophers, but the games were close. – Ed Crawford

Well, as you stated: Minnesota beat Iowa each of the last two times it visited the Twin Cities. The Gophers are trending up; the Hawkeyes? They are trending down. I also think the teams are close in talent, and I like the stability of the Gophers staff compared to the tumult at Iowa the last two seasons. So, factor that in with the home-field advantage, and I think Minnesota will win-even in my worst-case scenario for the Gophers.

It was a tough loss, as Frederick was a first-round draft pick of the Dallas Cowboys. In fact, he was the only Big Ten player selected in the first round of the 2013 NFL draft. But redshirt freshman Dan Voltz is a special prospect who has a bright future. He almost played last year as a true freshman. There likely will be an adjustment period for Voltz, but I think he?ll be OK in time-and maybe develop into one of the top centers in a few seasons.