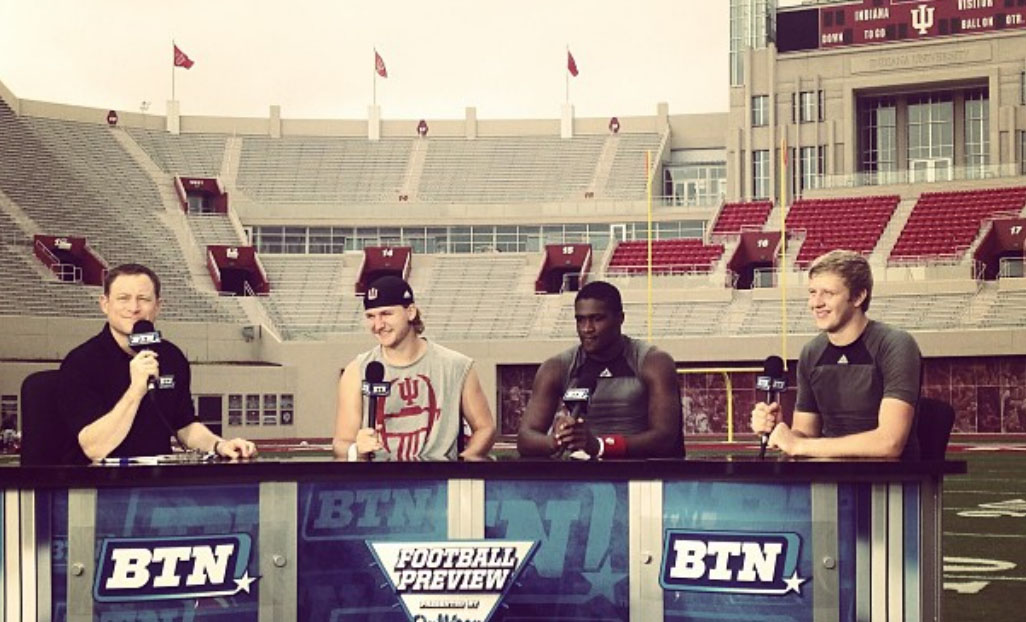 BLOOMINGTON, Ind. – Optimism is high at Indiana as it enters its third season under Kevin Wilson. Most of the key parts of a top offense are back, and the Hoosiers have eight home games-the first five at home. That?s why some think this program may be headed to its first bowl since 2007. Here?s what I learned watching practice today in Bloomington.

Indiana again should have one of the top offenses in the Big Ten after the unit ranked No. 2 overall in the conference last season (442.0 ypg) and No. 4 in scoring (30.8 ppg). It was interesting to watch the quarterbacks compete. Cameron Coffman and Tre Roberson are vying for the starting spot. Nathan Sudfeld also is in the mix. Offensive coordinator Seth Littrell says the job still is wide open, but he soon will cut the race to two to maximize reps. He didn?t tip his hand. But my money is on Roberson. All things being equal, Roberson?s athletic skills are the tiebreaker.

But BTN host Dave Revsine really liked what he saw from Sudfeld.

I had kind of assumed Sudfeld would be 3rd in #Hoosiers QB derby. Based on watching today, wouldn't surprise if he ends up starting

[ RELATED: Find out when we're coming to your school! ]

This may be the top receiving corps in the Big Ten. Cody Latimer, Kofi Hughes and Shane Wynn are the starters, but Duwyce Wilson is basically a first-teamer, too. Tight end Ted Bolser looked good today. The big, athletic senior is one of the most underrated tight ends in the Big Ten who Littrell says is almost like another receiver-and will be used as such. Littrell says the wideout unit goes six deep, which is good for this go-go offense that works at a quick pace. One thing that stood out in my mind was the size of many of the targets. Hughes, Latimer and Wilson all are big, physical receivers.

Without a doubt, the defense must play better if the Hoosiers want to reach the postseason. To succeed, the defense likely will need to rely on several talented freshmen. Yes, coordinator Doug Mallory will have to keep things basic, but it?s worth it to take advantage of the youngsters athletic ability. Up front, David Kenney and Darius Latham look impressive and are just-add-water ready. The linebacking corps may have the most freshmen play: T.J. Simmons, Clyde Newton and Marcus Oliver figure to be in the rotation. In the back end, safety Antonio Allen may be the most impressive of all the true freshmen. In fact, he eventually could unseat Mark Murphy at some point this season. Allen is a big hitter.

Linebacker may be the most worrisome position on the field. Mallory could move David Cooper from the middle to the outside and play freshman T.J. Simmons at an outside slot with Hoobler out. Steven Funderburk is poised to assume Hoobler?s spot. Griffen Dahlstrom and Flo Hardin also will be factors. Simmons, Newton and Oliver also will be in the mix. Bottom line: Mallory just wants his three best linebackers on the field.

Every coach I talked to today stressed how Indiana needs to get more physical across the board. It begins in the trenches. Indiana finally could have a legit Big Ten line after playing without a 300-pounder in each of Kevin Wilson?s first two seasons. Now, the front will average 300 pounds.

The staff is excited about sophomore tackle Jason Spriggs, a rising talent who looked good today. He?s a future stud. Sophomore guard Dan Feeney, who like Spriggs started last season as a true freshman, is another guy to watch. Feeney and fellow guard Bernard Taylor looked like physical forces on the interior for the line today. Taylor is strong. When I asked offensive coordinator Seth Littrell who have been some of the early impressive players in camp, he mentioned right tackle Peyton Eckert. The only spot that?s unsettled is center. And o-line coach Greg Frey told me he thinks his two options will be more athletic than last year?s starter, Will Matte. Jake Reed and Collin Rahrig are battling.

The losses of Adam Replogle and Larry Black leave Indiana looking for some answers at defensive tackle. One possible solution is sliding end Bobby Richardson inside from time to time. The aforementioned Latham and Kenney will help. Redshirt freshman Ralphael Green is a big body inside, and Alex Todd is another youngster to watch. The Hoosiers can?t get run over again after ranking last in the Big Ten vs. the run in 2012 (231.3 ypg). Vets like Zack Shaw, Bobby Richardson and Ryan Phillis must be leaders and set the tone.

Kevin Wilson hasn?t been happy with the play of his running backs since he has arrived. But he has some decent ones in Stephen Houston and Tevin Coleman. Each needs to step up for a rushing attack that ranked 10th in the Big Ten (130.8 ypg). Coleman is really coming on and impressed today. In fact, he looks better than Houston. And true freshman Laray Smith is a special talent who turned heads today with a big carry. Littrell gushes about Smith?s speed. He could be special and will be a factor this fall.

The Hoosiers have a nice safety duo in Greg Heban and Mark Murphy. In fact, the secondary looks like the strength of the defense, with Tim Bennett, Michael Hunter and Kenny Mullen manning the corner slots. Hunter and Bennett are the top corners. Ryan Thompson had a big hit today that created a stir. Without a doubt, Heban is the top safety.

It was fun to watch Mitch Ewald kick. The ball explodes off his foot. He could be the top kicker in the Big Ten and could end up winning a game or two for the Hoosiers. Explosive leg.

Is Mitch Ewald the best kicker in the #B1G? Hmmmm. #Hoosiers pic.twitter.com/CbvDdijhrP

And his interview with Kofi Hughes: