Photos: Look at what NIU sent to opponents' media 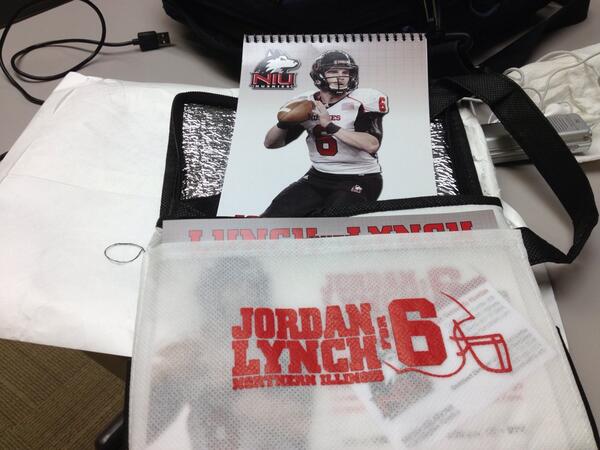 The words "Heisman" and "Candidate" are nowhere to be found, but Northern Illinois sure seems to be promoting dual-threat quarterback Jordan Lynch as such. In fact, the school recently sent out "Jordan Lynch for 6" lunch bags to opposing media that includes everything one wants to know about the QB.

Why do we care about this? Because Northern Illinois plays two Big Ten teams this year: Iowa (Aug. 31) and Purdue (Sept. 28). Mike Carmin, of the Lafayette Journal and Courier, tweeted a couple pictures of said lunch bag.

It's a lunch bag pic.twitter.com/ReaaY56ehX

Again, the bag doesn't refer to Lynch as a 2013 Heisman candidate, but why else would the team do this? Carmin feels the same way.

For what it's worth, Lynch struggled vs. Iowa and other BCS teams last season. The Hawkeyes held him to to 54 passing yards, on 6-of-16 (37.5 percent), and 119 rushing yards and a score in the 2012 season opener. His Orange Bowl performance vs. Florida State was even more forgettable. He did, however, torch Kansas for 369 total yards and two touchdowns.