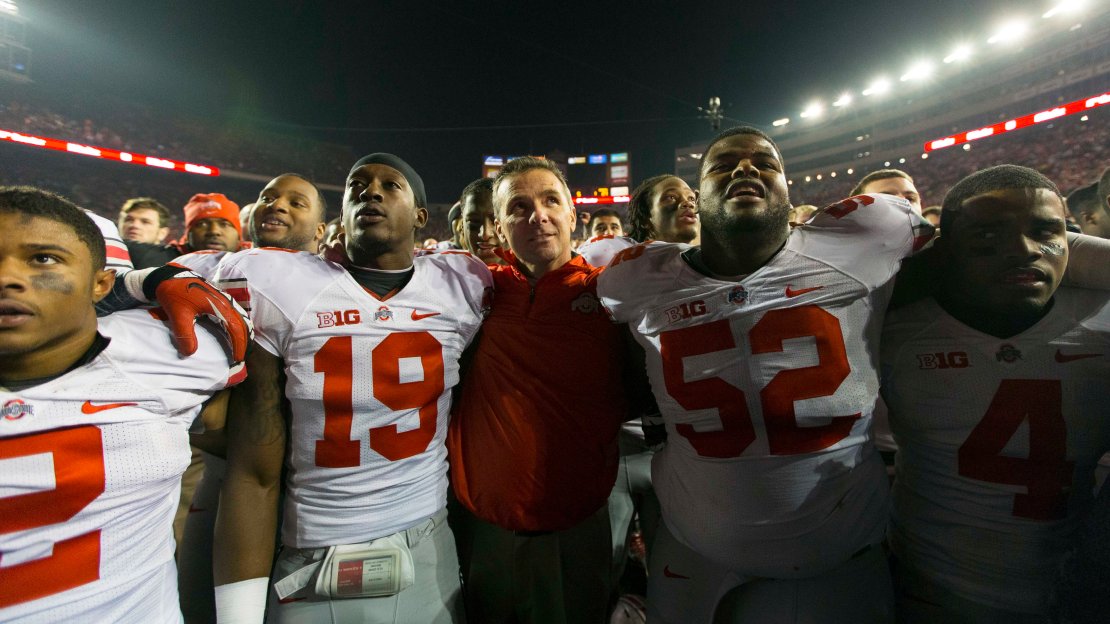 Urban Meyer?s 12-0 debut in 2012 stoked the fires for a program that was shackled by NCAA probation last season and couldn?t win the Big Ten or go to a bowl. Now unencumbered by probation and with most of that roster back-including quarterback Braxton Miller–expectations are enormous at Ohio State.

In fact, it may be national championship or bust for OSU and Meyer, who went 12-0 at Utah in his second season and won a national crown at Florida in Year Two.

Best case: The Buckeyes race out to a 2-0 mark playing home games vs. overmatched Buffalo and San Diego State. A trip to Cal is close for three quarters before Ohio State?s defense makes some key fourth-quarter plays. Urban Meyer is able to clear the bench during a visit from FCS Florida A&M, which gets pummeled. The starters will need the rest, because the next two games are tough. Ohio State pulls away from Wisconsin in the Big Ten opener in the Horseshoe before edging Northwestern in a prime-time game in Evanston in what could be a preview of the Big Ten championship game. Iowa and Penn State show some moxie and fight during visits to Columbus, but the talent gap between them and the Buckeyes is too great. Ohio State takes an 8-0 mark into November thinking not just Big Ten title-but BCS title. The Boilermakers have had a weird whammy on the Buckeyes, winning the last two meetings in West Lafayette and three of the last four in Ross-Ade Stadium. The whammy doesn?t continue. OSU crushes Purdue, led by former Buckeye assistant Darrell Hazell. The pressure to remain perfect intensifies. A trip to Illinois and a visit from Indiana are mere speed bumps, allowing the Buckeyes to tune up from a huge season-ending visit to Michigan. With a trip to the Big Ten title game and possible BCS title game bid on the line, Ohio State storms into Ann Arbor and wins, continuing its dominance of the Wolverines. The Buckeyes are 12-0 for a second straight season and headed for the Rose Bowl or the BCS title game.

Worst case: Three of the first four games are in Columbus, allowing Ohio State to push out to a 4-0 start-but the game at Cal is close, like last year?s 35-28 OSU win in the Horseshoe. The Buckeyes have won five of the last six meetings with the Badgers, but a visit from Wisconsin to open Big Ten play pushes the Buckeyes to the wall in what essentially is a Leaders Division title game before they prevail. Ohio State can?t get up emotionally for a trip to Northwestern and loses to the Wildcats for the first time since 2004 in a showdown of Big Ten powers. The Buckeyes take out their frustrations vs. Iowa at home but lose a turnover-prone game to Penn State the next week in Columbus. Ohio State bounces back to win at Purdue, at Illinois and vs. Indiana, which hasn't beaten the Buckeyes since 1988. The season boils to down to a trip to Michigan. The Wolverines have been on the short end of this series lately, dropping eight of the last nine. Michigan did win the last time the game was in Ann Arbor in 2011. And, the Wolverines win again in the Big House vs. Ohio State. At 9-3, the Buckeyes head to a nice bowl in Florida. But, anything but a trip to the Rose Bowl or BCS title game is a disappointment.