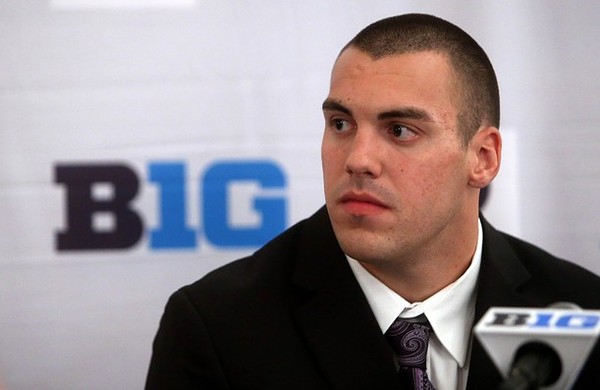 If there was a darling at Big Ten media days, it was Northwestern. Expectations are at an all-time high in Evanston, where talk of winning the Big Ten is legit for a program that has eight starters back on offense and seven on defense from a 10-win squad that won the program?s first bowl game since the 1948 season.

?We have a veteran team,? defensive end Tyler Scott said. ?We think that experience will no doubt help us in the fall. But we are just trying to stay humble, work hard and do our job. If we do those things, we should be OK.?

It will be fascinating to see how the Wildcats deal with expectations. It?s one thing to come out of nowhere and surprise people. It?s another to be the hunted with a target on your back.

?Our expectation is to win championships,? Northwestern coach Pat Fitzgerald said. ?We never have shied away from winning championships. Our focus is on how we prepare and our process. Those internal expectations outweigh outside expectations. We are far from where we want to be. We want to take the necessary steps to win a championship.?

And it could happen this fall. Fitzgerald knows how to win championships at Northwestern. He was a key player and leader on Wildcat squads that claimed back-to-back Big Ten championships in 1995 and 1996, going to the Rose Bowl following the ?95 campaign and to the Citrus Bowl after the 1996 season. Fitzgerald knows what this Northwestern team is capable of coming off a 10-3 mark last season.

?Now, obviously, we raised the bar a year ago from winning a game and getting that monkey off our back, but at the end of the day the expectation is to win championships,? Fitzgerald said. ?And when you walk into our team room on the right side, it would be your left, we'd say to win the Legends Division and win the Big Ten. We want to put that trophy in our case just like the other 11 institutions and head coaches are going to visit after me.?

In addition to dealing with being a hot team, Northwestern?s other biggest obstacle is a schedule that rates among the Big Ten?s toughest. There are games at Wisconsin, at Iowa and at Nebraska, as well as visits from Ohio State, Michigan and Michigan State. In fact, the Buckeyes? prime-time visit on October 5 could be a preview of the Big Ten title game. That?s a lot of heavy-lifting, compared to the relatively soft slate for Leaders Division favorite Ohio State.

?No doubt, we have our challenges,? Scott said. ?But I don?t want to get ahead of where we are at now. We also have some challenges in the non-conference. And ask Coach about our non-conference schedule.?

?We have a difficult schedule to go on the road to open against a difficult Cal team, and Coach (Sonny) Dykes did a great job at Louisiana Tech and come back to Syracuse is going to be a challenge.?

A big reason for Northwestern being a sexy pick to win the Legends Division and perhaps the Big Ten is an offense led by quarterback Kain Colter and running back Venric Mark, who became the school?s first 1,000-yard rusher since 2006 last season. Coordinator Mick McCall has done a great job keeping defenses off balance by also using quarterback Trevor Siemian for an attack that features one of the top receiving corps in the league.

?They have some weapons,? said Indiana coach Kevin Wilson. ?Their offense can stretch you horizontally and vertically. And the line is a physical group that usually doesn?t get enough credit.?

But it?s the defense that really sets this Northwestern team apart from past Wildcat clubs. Fitzgerald has said often that this defense is as fast and athletic as any he has coached since taking over his alma mater in 2006. It begins at linebacker with the likes of Chi Chi Ariguza and Damien Proby and stretches back to a secondary that is highlighted by safety Ibraheim Campbell and cornerback Nick VanHoose. Up front, Scott has emerged as one of the top pass rushers in the Big Ten.

?As we rewind, (we are) very proud of the success we've had, five straight bowl seasons,? Fitzgerald said. ?But as I said as I put the Gator Bowl trophy up above my head, we're just getting started at Northwestern. We have a lot of work. Talk is talk, and now it's about time for action, and looking forward to getting back with our guys here in a few weeks.?