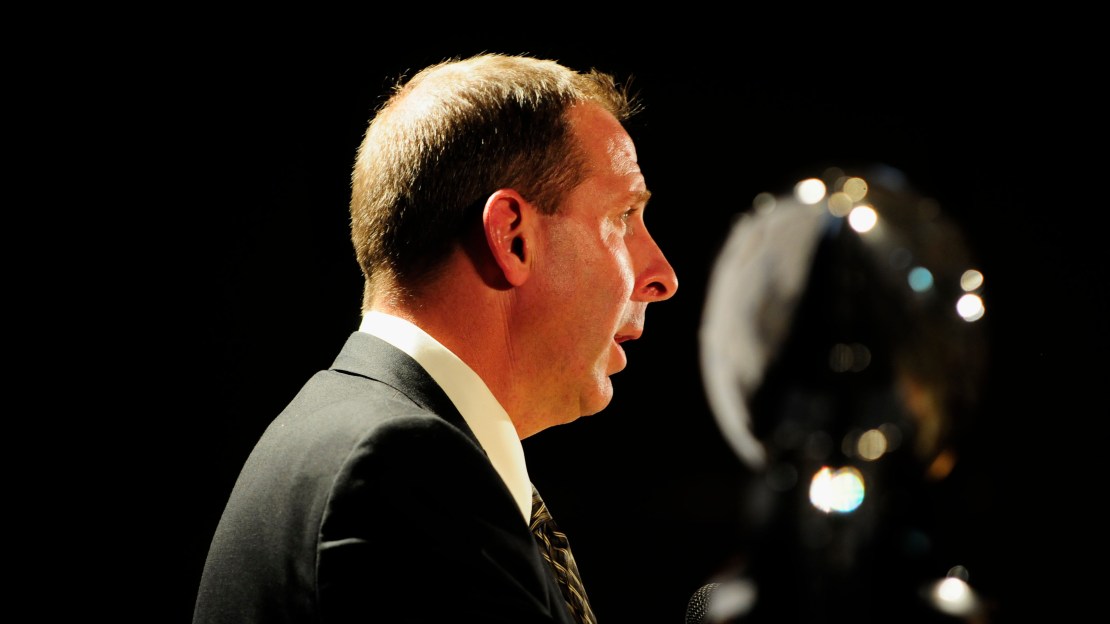 Big Ten media days kick off Wednesday at the Hilton Chicago. There will be no shortage of questions, but not all of them will be posed or answered. I have a long list of questions-101, to be exact-as we await the 2013 season.

So, for a little fun, I shared my questions with colleague Brent Yarina to see his answers. We broke the activity into two parts, and here's the second installment.

Have any other questions you want me to ask a player or coach? Send it to me in the comment section at the bottom of this post or tweet it to @BTNTomDienhart.

52. Will the Cornhuskers have the top offense in the Big Ten?

BY: Either them or the Buckeyes, most likely.

53. Will Michigan State have the top defense in the Big Ten?

BY: Yes, especially if the offense can keep the chains moving and clock ticking.

54. How will the Wisconsin offense look any different under Gary Andersen?

BY: Can't help but be a little different, but it will continue running a lot with Melvin Gordon and James White in the backfield.

BY: Wouldn't be a shock, however I like Ryan Shazier's chances.

56. How will Jordan Hall be used in the Ohio State offense?

BY: As an athlete. Give him his share of carries and throw him the ball in open spaces to see if he can make a play.

57. Does any conference have a better collection of tight ends?

BY: Just maybe. Ted Bolser caught 41 passes for 445 yards last year, yet few talk about him.

58. Is the Iowa running back position no longer cursed?

59. Can Minnesota develop some big-play ability on offense?

BY: They can, yes, but the source of those big plays is still a mystery.

60. How soon will LB Jake Ryan return to the Michigan lineup?

BY: Reports out of Michigan indicate October. Maybe Michigan's last game of the month, Oct. 19 (vs. Indiana)?

BY: No coach will make a difference if the quarterback misses as many open targets and the receivers drop as many passes as they did last season.

62. Will Ryan Russell finally emerge as the next great Purdue defensive end?

BY: Not sure about "great," but Russell will be an above average pass-rusher.

BY: This is a question one can ask every year. In other words, it's not very likely.

64. Is there a more underrated coach than Minnesota?s Jerry Kill?

BY: Yes. Kill needs to prove it at Minnesota, at this level, to earn such a distinction.

65. Will a gaggle of newcomers help a maligned Cornhuskers defensive line?

BY: The added speed and athleticism will be a huge boost.

66. What will Northwestern RB Venric Mark do for an encore?

BY: Duplicate last year's numbers, and if I had it my way, become more of a threat in the passing game. He's too good in open space not to get more screen passes.

67. Is Nebraska?s Taylor Martinez the best quarterback in the Big Ten?

BY: No, that's Braxton Miller. If we want to talk best quarterback, from strictly a passer standpoint, Devin Gardner could be the answer in a couple months.

68. Who will lead Wisconsin in rushing: Melvin Gordon or James White?

BY: It'll be close. White is a proven veteran who can find the end zone, so he figures to get more touches. I think.

BY: More important: Can Illinois win a Big Ten game, something it hasn't done since early 2011?

71. Does anyone play harder than Wisconsin LB Chris Borland?

BY: I'd take him against anyone in the conference.

72. Is Michigan freshman RB Derrick Green worthy of the hype?

BY: We'll soon find out. If he is, it would be a huge lift to Michigan's Big Ten title chances.

73. Who will emerge as the star linebacker at Nebraska?

BY: How about Zaire Anderson?

74. Is Michigan OT Taylor Lewan the best blocker in America?

75. Will Iowa and Minnesota battle to avoid the Legends Division cellar?

BY: Almost certainly. Like last year, Michigan State could be in the mix, as well, if the offense doesn't improve.

76. Is Ohio State LB Ryan Shazier the best defensive player in the conference?

BY: Matters what you like most. Bradley Roby is pretty salty, too. As is Tyler Scott.

BY: He can, but he'll have a lot of competition, including Jared Abbrederis, Kenny Bell and Cody Latimer.

78. Is there a more anticipated non-conference game than UCLA at Nebraska on Sept. 14?

BY: Maybe Notre Dame-Michigan, considering its the last one for the foreseeable future at Michigan Stadium.

79. Is there a more least anticipated non-conference game than Florida A&M at Ohio State on Sept. 21?

BY: Illinois vs. Southern Illinois isn't very enticing. Neither is Iowa vs. Missouri State. There are others, too.

80. Aside from LB Jonathan Brown, are there any stars on Illinois? defense?

BY: Mason Monheim is pretty solid and could turn into a "star."

81. Is there a hotter offensive coordinator than Nebraska?s Tim Beck?

BY: No. Closest one: Tom Herman.

82. Is there a hotter offensive coordinator, part 2, than Ohio State?s Tom Herman?

BY: Whoops! Jumped the gun.

83. Is there a hotter defensive coordinator than Michigan State?s Pat Narduzzi?

BY: Nope. And it's not even close.

84. Could the Ohio State at Northwestern game on Oct. 5 be a preview of the Big Ten title game?

BY: It could be, but Northwestern's schedule, including this game, will be tough to navigate.

86. Will Ohio State be unbeaten when it plays at Michigan on Nov. 30?

BY: Yes. Biggest hurdle before the season finale: at Northwestern (Oct. 5).

87. Will Brady Hoke ever slip up and say ?Ohio State??

BY: Not a chance.

89. Is Philip Nelson the answer at quarterback for Minnesota?

BY: He showed promise last year and could turn into a solid dual-threat signal-caller.

90. Can Nathan Scheelhaase have a big senior send-off at Illinois?

BY: Probably not. Not sold on him staying healthy.

BY: Somehow, here's a guy who seems to be a forgotten man. He'll be fine.

BY: Urban and company will send some kind of message.

93. Is Mauro Bondi the next great Nebraska kicker?

BY: Yes, especially on an offense as prolific as Nebraska's.

94. Will the rebuilt interior of Michigan?s offensive line be OK?

BY: It probably won't be 51-49 on the dot, but there will be at least one track meet involving Indiana.

96. Who will be the Golden Gophers? top wideout?

98. Will Michigan State?s Mark Dantonio run a trick play at a key time this season?

BY: Definitely. Only question is: What will the play be called?

99. Will T Carl Davis become a star on the Iowa defensive line?

BY: He figures to be the line's best player, yes.

100. How many Big Ten teams will go bowling?

BY: Nearly impossible to know before seeing the matchups. That said, I'll say three.