Dienhart: Here's a trap game for every Big Ten team 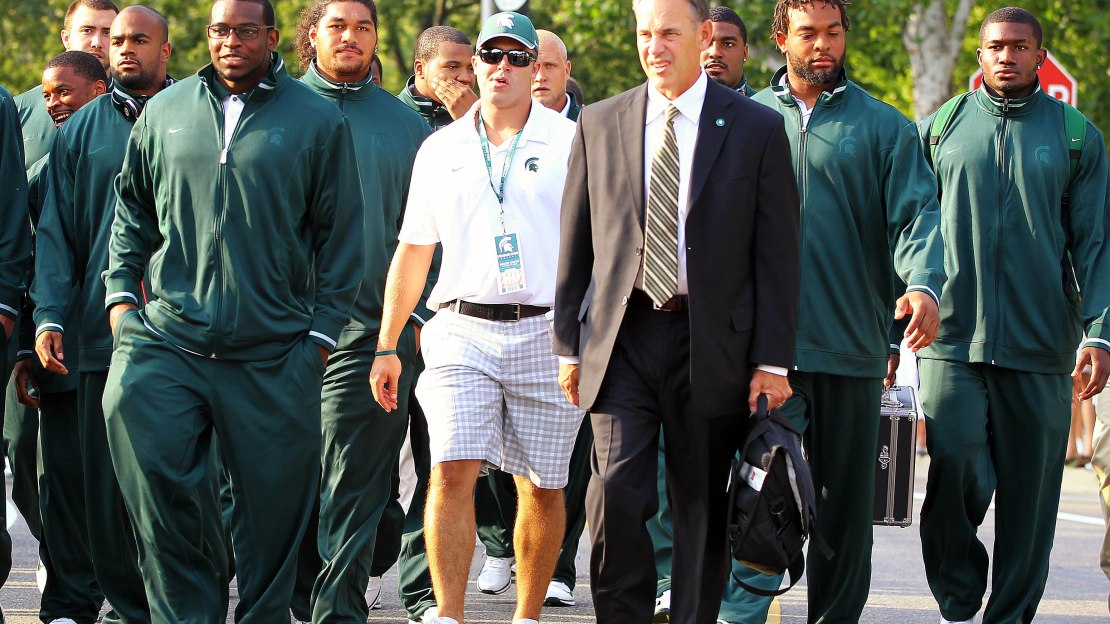 They lurk on every team?s schedule. They are the ?trap? games. What?s a trap game? It?s a contest that your school probably should win-but may not, for various reasons. Here is my pick for each team?s trap game for 2013. You have been warned.

ILLINOIS
Miami (Ohio), Sept. 28. The game comes after a bye week, giving the Fighting Illini plenty of time to prepare for an opponent that went 4-8 last season and ended the year losing four in a row and six of seven. Still, the RedHawks are dangerous, coached by former Michigan State offensive coordinator Don Treadwell who may need a big 2013 to keep his job. And Illinois-which plays Washington in Soldier Field before the Miami visit–can?t get caught looking ahead to a visit to Nebraska.

INDIANA
Navy, Sept. 7. It?s this simple-the Hoosiers probably have to win this game to have a shot at bowl eligibility for the first time since 2007. The Midshipmen took a 31-30 decision vs. Indiana last season in Annapolis. IU opens the season the week before with a Thursday visit from Indiana State, a strong FCS program that gave Indiana all it could handle last year. A visit from Bowling Green follows the Navy game, as the Hoosiers open with five home games.

IOWA
Northern Illinois, Aug. 31. Yes, it?s the first game of the season. At least Iowa will have weeks to prep for the Huskies, who capped a 12-2 season with a trip to the Orange Bowl last season and barely lost to the Hawkeyes in last season?s opener in Solider Field (18-17). The next week, Iowa plays host to a struggling FCS Missouri State, so the Hawkeyes shouldn?t be looking past NIU, which essentially is a must-win for the Hawkeyes.

MICHIGAN
At Penn State, Oct. 12. If Penn State remains healthy, it will have a shot to win most of the games on the schedule. In fact, it wouldn?t be a surprise to see the Nittany Lions beat Michigan when the Wolverines visit State College. Making PSU more deadly is that it has nothing to lose in any game, as it continues to be on probation. The teams haven?t met since 2010, but Penn State has won the last three meetings (discounting vacated wins). Before that, Michigan ripped off nine victories in succession vs. Penn State. The Wolverines play host to Minnesota the week before the trip to Happy Valley and welcome Indiana the week after, so the sandwich games work out well for Michigan.

MICHIGAN STATE
At Iowa, Oct. 5. One win Iowa likely has to have to go bowling is when Michigan State visits. These are two teams coming off of disappointing 2012 seasons. Iowa has had the Spartans? number lately, winning three of the last four and five of seven. It won in East Lansing in double overtime last season. But MSU won the last time it visited Iowa City in 2011. The Spartans will have a bye to prep for the Hawkeyes after playing at Notre Dame on Sept. 21. Coming out of the Iowa game, MSU welcomes Indiana-which nearly dumped the Spartans (31-27) last year in Bloomington. Be careful, MSU.

MINNESOTA
San Jose State, Sept. 21. San Jose State travels to Minnesota in one of the weirdest intersectional matchups all season long. But don?t sleep on the Spartans, who went 11-2 last season but have a new coach. Still, SJSU is on the rise. The teams split two games played in Minnesota in 1991-92. The Golden Gophers play host to FCS Western Illinois the week before and welcome Iowa the week after the San Jose State game. Lose to the Spartans, and the Golden Gophers likely can forget about bowling.

NEBRASKA
Northwestern, Nov. 2. The Northwestern at Nebraska game shapes up as a possible de facto Legends Division title contest. The Wildcats won the last time they visited Lincoln, taking a 28-25 triumph in 2011. And they had the Cornhuskers beat last season in Evanston before blowing a 28-16 fourth-quarter lead and falling, 29-28. No doubt, Northwestern will have Nebraska?s full attention. The Huskers? task is complicated by playing road coaches around this game, going to Minnesota the week before and Michigan the week after.

[ RELATED: Have you seen Nebraska's alternate uni vs. UCLA? ]

NORTHWESTERN
At Illinois, Nov. 30. Illinois needs to find a way to get the upper hand vs. Northwestern, which visits Champaign in the season finale. The Fighting Illini have lost three of the last five meetings and seven of the last 10 to their in-state rival. Tim Beckman has made beating NU a point of emphasis. So, you know how much the Illini want this one. Making the game even more dangerous for the Wildcats is the fact Illinois may be playing for bowl eligibility with a chance also perhaps to ruin NU?s Legends Division title hopes. Before playing in Champaign, the Wildcats play host to always rugged Michigan State.

OHIO STATE
At Northwestern, Oct. 5. The Buckeyes figure to be favored in every game this season, so many traps loom. But the trip to Evanston could be especially perilous. This could be the Wildcats best team in ? forever. And before heading to NU, the Buckeyes play host to Wisconsin-the likely second-best team in the Leaders Division. Coming out of the Northwestern game, OSU plays host to an Iowa team that may be playing for Kirk Ferentz?s job. The Buckeyes have bullied Northwestern for generations. Since losing to NU in consecutive seasons in 1962-63, the Buckeyes have gone 33-2 vs.  the Wildcats. The losses have come in 1971 and 2004, when the Wildcats took a 33-27 decision in Evanston.

PENN STATE
At Indiana, Oct. 5. Discounting vacated wins, Penn State is 16-0 all-time vs. the Hoosiers. But that skein could be in big-time jeopardy, as the Nittany Lions play in Bloomington vs. a rising IU squad. Penn State-which plays host to Kent State before going to Indiana–likely won?t be able to trade touchdowns with Indiana. And Penn State can?t afford to look ahead to a visit from Michigan and then a trip to Ohio State.

PURDUE
Northern Illinois, Sept. 28. Getting to six wins for Purdue will be daunting-and it also may be next to impossible without a triumph over the visiting Huskies. NIU is coming off a season for the ages that saw it go to the Orange Bowl. What will Purdue?s offense look like? Making the Boilermakers? task that much more difficult: The NIU game is sandwiched between a trip to Wisconsin and a visit from Nebraska.

WISCONSIN
At Iowa, Nov. 2. When the Big Ten went to divisions in 2011, one casualty was the Wisconsin-Iowa rivalry, as each was put in opposite divisions. Well, the rivals will meet for the first time since 2010. The Badgers have won three of the last five, but the Hawkeyes have taken six of the last nine. The Iowa-Wisconsin series is 42-42-2. The Badgers need to be careful when they travel to Iowa City. The Hawkeyes may be battling for their bowl life. Wisconsin will have a bye to prep for Iowa after playing at Illinois the week before. That?s good. After the Iowa trip, the Badgers welcome BYU.