Indiana's Seth Littrell: 'We have a long way to go' 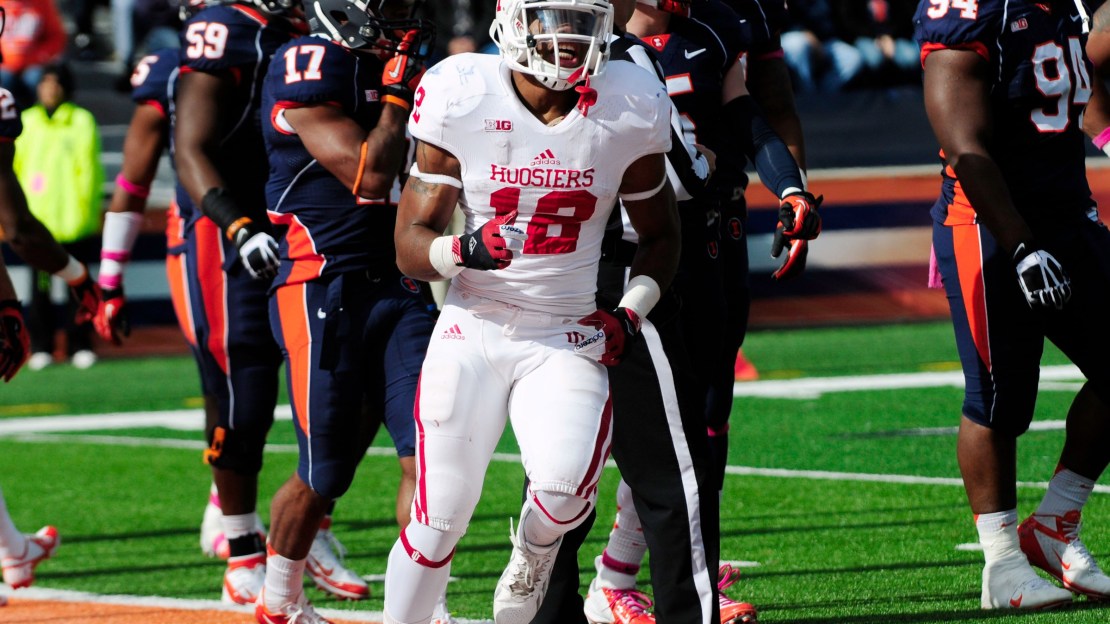 Indiana continues to improve under Kevin Wilson, who debuted with a 1-11 mark in 2011 but improved to 4-8 last season. And, a big reason for that was the play of a prolific offense led by coordinator Seth Littrell. The Hoosiers had one of the Big Ten?s top offenses last season, ranking No. 2 in total offense (442.0 ypg); No. 1 in passing (311.2 ypg); No. 4 in scoring (30.8 ppg). But it wasn?t enough to carry the program to its first bowl since the 2007 season.

That could happen this year with the continued maturation of a young offense. Of course, the defense also needs to improve. Still, if the Hoosiers are to become bowl eligible, Littrell?s offense likely will have to carry the team. I caught up with Littrell to get his thoughts on his attack.

Q: Were you pleased with how spring practice ended?
A: Yes, overall. We had a lot of young guys who played last year as freshmen, and they continued to get better. But as true freshmen, you are kinda throwing them to the wolves after two-a-days. There?s a point where you lose your fundamentals because you have to cut down and prepare for games. This spring, we got them back to fundamentals, getting in and working on developing their skills as players. We played a lot of young guys. (tackle Jason) Spriggs, (guard Dan) Feeney, (running back Tevin) Coleman, the improvement they made from December to April was unbelievable.

We have Tre (Roberson) back off the broken leg. He?s looking really good and is running around. I was shocked at his progress. But you could tell early he had some timing issues. It?s a little off. He needs to get acclimated to the speed of the game again. If you make Tre sit back there and throw the ball, and learn how to throw and read defenses, he has improved. The more he throws, the better he gets. He?s the type of guy who once you get him lathered up, he gets better and better.

Q: Could this be one of best offenses in the Big Ten?
A: We have a chance to do some good things. But again, you never know. The good thing about it is they work hard. The confidence is improving. The more success they had last year, the more confident they got. You could tell this spring. They are starting to get a little bounce in their step. We have a chance, as long as they keep working hard.

Q: Did you visit anywhere in the offseason?
A: I always talk to my guys, (Cal coach) Sonny (Dykes), (Oklahoma offensive coordinator) Josh Heupel, (West Virginia coach) Dana (Holgorsen) ? I have talked to (Texas Tech coach) Kliff (Kingsbury) a little bit. ? Those are guys who run systems similar to ours. We also did stuff as a staff, looking at a lot of film from across the country. We tweaked some things. And we still have some tweaking to do. You always are studying and looking for better things and areas we can improve on.

Q: What are some of the tweaks?
A: Some of our pass concepts, cleaning up some protection issues, some different play-action stuff. There always are little tweaks. Our offense, year in and year out, our base is our base. That?s the stuff we will do each game. But there are always tweaks here and there, adjustments. As young as they were last year, we didn?t want to put everything in. Now we can start to open up, branch out and do some different things off some stuff we did last year and grow from there. We want to grow every year.

Q: Is Tre Roberson the starter?
A: We will figure that out as we go through two-a-days. There really isn?t a starter at any position. Every player is gonna compete all summer and in two-a-days. We are playing a lot of young guys because they often were the best we had. People have to work and get better. Whoever is the best will start. We have to play the guys who give us the best chance to win.

Q: How good could Jason Spriggs be?
A: He could be really good. He played last year at probably 268-270 pounds max. He was still pretty skinny. But he?s a good athlete. The thing about him is he can run off the football. At times, people were getting a bull rush on him. So, it?s really important for him to get in the weight room and get bigger-which he has done. He could be pretty good, along with Dan Feeney. He?s one of the more impressive freshmen I have been around. Now, after they have had some success as true freshmen, you have to stay on them and keep them working and improving as sophomores. A lot of times when you have early success, you see guys stay where they are developmentally or go backward. You have to stay on them, stay humble and not let them get a big head. Those two have been pretty humble. They have a chance to be really good.

[ RELATED: Where does Indiana land on our Big Ten receiving corps rankings? ]

Q: Who will be the leader at receiver?
A: I think we have a bunch of guys. They all are a bit different. Some of the guys are more vocal than others. Some are out there chopping wood each day, catching balls. It?s a pretty good mix of guys from a personality standpoint.

Shane Wynn is a talker and brings the energy to practice. Kofi Hughes has been around, is the older guy. Tight end Ted Bolser will be a senior, guys like that need to step up. We need to build leadership. It?s on-going and that?s what we have emphasized as much as anything of late-leadership.