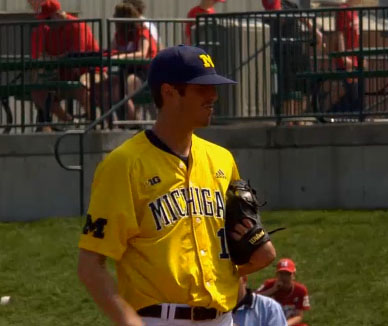 Who doesn't enjoy a good Harry Caray impersonation? There's no shortage of examples, from Will Ferrell to Ryan Dempster, but we're going to go ahead and put Michigan pitcher Kyle Clark's rendition near the top of the list. Clark showed off his best Caray impersonation while introducing the Michigan lineup prior to Saturday's game at Nebraska. Watch the entertaining intro here.

That was really, really good. The best part – other than the spot-on impersonation – might be how Clark never opened his eyes while in character. He was in the zone.

Clark went on to pitch 1/3 inning out of the bullpen in Michigan's 19-9 win over the Huskers.

Speaking of intros, Illinois had some fun, too, before its game Friday at Minnesota:

And who can forget about Luke Rasmussen's memorable 2011 intro?