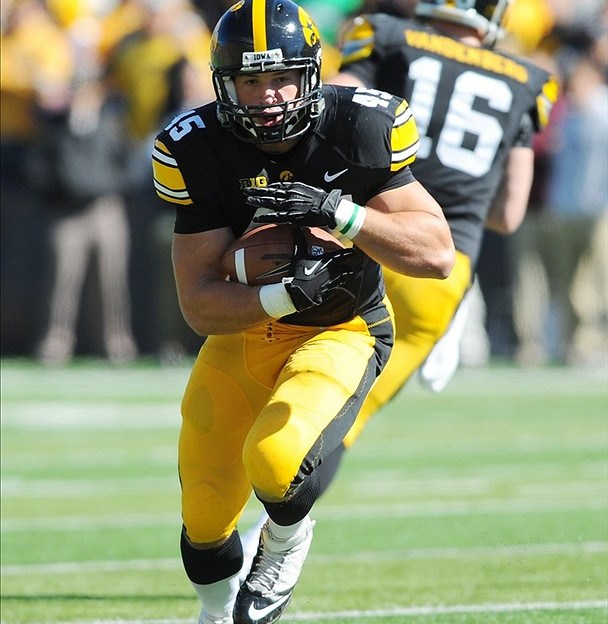 It?s almost time for an unofficial national holiday: The arrival of the college football annuals. Athlon?s offers a look at its 2013 edition. And, for Iowa fans, it isn?t a pretty sight: The Hawkeyes are picked to finish last in the Legends Division. The 2013 publication pegs Iowa with a 1-7 record in the Big Ten. It also has Iowa finishing 4-8 overall, which would match last season?s overall record–the program's worst since 2000. This isn?t good news-but, it isn?t shocking, either.

?With what they did last year and the huge question at the quarterback position, it really wasn?t that hard of a decision,? Mitchell Light, who is the managing editor for Athlon Sports, told HawkCentral.com. ?I?ll be interested to see what other people do, other publications other people who make picks.

?But I?ll be surprised if a lot of people don?t have Iowa sixth.?

Speaking of teams with issues, Illinois can relate. But one isn?t linebacker Jonathan Brown. The guy will be one of the Big Ten?s top linebackers, if he?s healthy.

Brown looks good to go after dealing with shoulder issues that caused him to miss the last three games of 2012 and not have contact in the spring.

The great David Jones of the Harrisburg Patriot-News sounds off on the new divisional alignment in the Big Ten. He likes it. So, it must be good.

Jones sums it up best here: Realignment is about two vital components: 1. Giving the Big Ten divisions a regional flavor to boost rivalry; 2. Making it easier for fans to travel to away games.

Jones also thinks the perceived competitive imbalance will work itself out over time and is difficult to predict. He?s correct.

Jones believes the long-term health of an expanded B1G depends much more on how much the divisions feel like separate regional rivalries. That will drive growth and engage fans, he says. The geographic arrangement with traditional Eastern-style markets of Cleveland and Detroit included with those of NYC/North Jersey, Philadelphia, Pittsburgh and Baltimore/Washington is what will make the new set-up hum.

O?Brien passed over vets like defensive line coach Larry Johnson and linebackers coach Ron Vanderlinden to tab Butler, the secondary coach, to replace Roof. Butler is a smart coach who brings a lot of energy to the field.

"There are two guys on the staff, Ron and Larry, that are excellent at their jobs and, you know, they're very valuable members of the staff," O'Brien told Flounders.

"They're two guys that I kept and interviewed and (I) think have done a great job for us. But at the end of the day, John was the guy that was getting the promotion."

This remains one of the best staffs in the Big Ten.

Poor William Gholston. Not only does the former Michigan State defensive end have to deal with perceptions that he largely underachieved in college, but he also is fighting to shed the image of cousin Vernon Gholston.

Oh, Jets fans remember Vernon Gholston. The former Buckeye was the No. 6 overall pick of the 2008 draft. He was released three years later with as many career sacks as me: 0.

This will be fascinating to watch play out.

Tom Shatel of the Omaha World-Herald agrees with me: Tommie Frazier waited too long to get into the College Football Hall of Fame. The Nebraska quarterback great finally got the call yesterday. Now, when will Eric Crouch get in? It?s only a matter of time for the 2001 Heisman winner, right?

Minnesota announced a two-game series with TCU, playing the Horned Frogs in Ft. Worth in 2014 and in Minneapolis in 2015.

The school also took care of some bookkeeping in the process. Well-done, Norwood Teague!

Michigan punter Will Hagerup will miss the 2013 season but will return in 2014. He was suspended in December for violating team rules after earning Big Ten punter of the year honors. I think Michigan will be just fine with junior Matt Wile at punter.

It was a joyful time at Michigan State when Gary Harris opted to return for his sophomore season. But the Big Ten Freshman of the Year said it was a hard decision.

Asked on the Dan Dakich radio show in Indianapolis about the possibility that Michigan State will be the preseason No. 1 team, Harris said the Spartans would definitely talk some about it even though Tom Izzo ?hates it.?

There is no ignoring the pink elephant in the room. Just deal with the expectations and embrace them. It beats the alternative: no one caring about you.

Indiana hot-shot incoming freshman Noah Vonleh is being counted on to play a big role next season as the Hoosiers? top incoming recruit. In fact, Vonleh could be good enough to be one-and-done. But he?s not thinking about that.

Terry Hutchens of the Indianapolis Star says the 6-9 power forward, ranked No. 8 in the nation by Rivals.com, is being projected as the No. 11 pick in the 2014 NBA draft by nbadraft.net before he has played a single minute. That prediction has him going ahead of players such as Michigan State?s Gary Harris and Michigan?s Mitch McGary.

?I want to be at Indiana three or four years, at least that?s how I?m looking at it going in,? Vonleh told Hutchens. ?Things could always change, but I?m expecting to be a four-year college player.?

This all sounds good. But, stay tuned.

Chris Webber?s disassociation-along with Louis Bullock and Maurice Taylor–with Michigan ends today, but Nick Baumgardner of MLive.com wonders if bygones will be bygones.

Asked to discuss the situation Monday, Michigan athletic director Dave Brandon had little to say — one way, or the other-to Baumgardner. "Nothing new to discuss on the matter," Brandon wrote via email.

Anyone else tired of this story?

"I say it publicly all the time that I don't think there's any team out there that would have beat that '95 team," Frazier said. #Huskers

My take: It?s hard to argue with that notion.

My take: Join the club.

Former Colorado coach Bill McCartney also got the Hall call. In many ways, the rise of Frazier began against Mac's team on Halloween of '92.

Bill O'Brien is not baptizing babies at this caravan stop (wouldn't surprise me if it happens) but he is in high demand.

My take: Maybe he can do baptisms next year.

Orlando Pace in 1996: "In the first couple of plays you can take a lot of the heart out of the defenders." He did that more often than not.

My take: He was one of the best I ever saw. Just dominating.

Remy Abell told me tonight he has narrowed his list of schools to three — Saint Louis, St. Mary's and Xavier. Hopes to decide soon. #iubb

My take: And this is a guy who couldn?t have still helped Indiana?

Ron Dayne or Montee Ball? Who would you rather have in your collegiate backfield?

My take: Dayne. When talents are equal, you always go with the bigger guy, right?