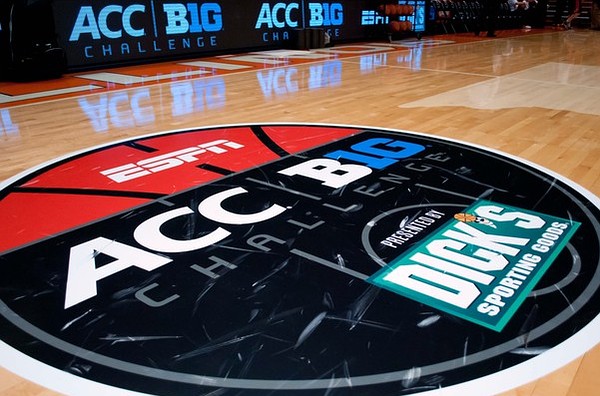 It's time to talk the ACC/Big Ten Challenge. The event might be six-plus months away, but the 2013 matchups were released Wednesday afternoon. This year's event is Dec. 3-4, with six games each night, and it features first-year ACC members Notre Dame, Pittsburgh and Syracuse.

That last part, the addition of the three perennial Big East contenders, makes this event even more intriguing and far more daunting for the Big Ten. Not only does the ACC gain those three teams, but with 15 teams total, it gets to keep last year's three-worst teams (Clemson, Virginia Tech & Wake Forest) out of the event.

No matter, after losing the first 10 events, the Big Ten hasn't lost since 2008. A season ago, the two conferences tied, 6-6, ending the Big Ten's three-year winning streak.

Let's take a look at the official schedule (times and ESPN stations TBA):

Ranking the Games
1. Michigan at Duke – NBA scouts will be all over this game, with players like Mitch McGary, Glenn Robinson III and Jabari Parker playing starring roles.
2. North Carolina at Michigan State – Part of me wishes Michigan State and Michigan flipped perennial power opponents, so the Spartans could face Jabari Parker.
3. Indiana at Syracuse – A rematch of last season's Sweet 16 matchup, which the Orange won, and the 1987 NCAA title game, which Indiana won.
4. Notre Dame at Iowa – One of the Big Ten's deepest and most intriguing teams welcomes an Irish roster that returns three of its top four players.
5. Wisconsin at Virginia – A rematch of last season's ACC/Big Ten Challenge game, which saw the Cavaliers card a rare win at the Kohl Center.
6. Maryland at Ohio State – In its last year competing in the event as an ACC member, Maryland draws Big Ten title contender Ohio State in Columbus. Good luck!
7. Penn State at Pittsburgh – These two in-state foes haven't met since 2005, believe it or not, and the Nittany Lions haven't topped the Panthers since 2000.
8. Illinois at Georgia Tech – Illinois has won a Big Ten-best four consecutive Challenge games, including a win over the Yellow Jackets last year, and a victory would put it over .500 in the event.
9. Florida State at Minnesota – Both teams lost arguably their best player to graduation (Michael Snaer & Trevor Mbakwe), but each returns its share of experience.
10. Northwestern at North Carolina State – The Wildcats are better than they showed down the stretch, and Drew Crawford and JerShon Cobb's returns can only help in Chris Collins' first year.
11. Miami (FL) at Nebraska – Yes, the Hurricanes are fresh off the ACC title and a Sweet 16 run, but they lost their six top scorers, including breakout star Shane Larkin.
12. Boston College at Purdue – Neither team finished above .500 last season, however they both feature promising sophomore talents who will be relied on heavily.