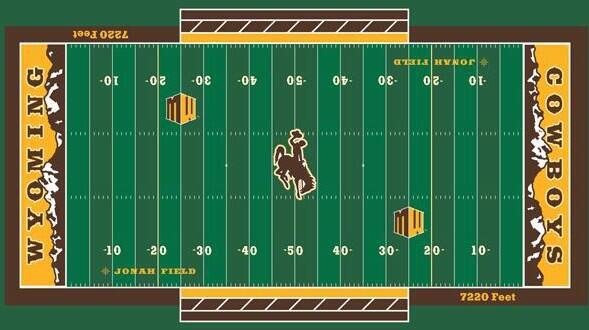 Pictured above is Wyoming's new football field. It's pretty sweet, isn't it? The illustrations of the state's Teton Mountains in both end zones is the headliner. Wyoming's decision to include the iconic mountains in the end zones got me thinking: What thing synonymous with Big Ten towns/cities would be cool additions to Big Ten end zones? I asked the question on Twitter, and Big Ten fans responded.

Here are the some of the best, most G-rated tweets:

@BTNBrentYarina No worries, Maryland already has that taken care of.

@BTNBrentYarina Who wouldn't want to run in to a Juicy Lucy end zone? Melty golden cheese bursting from a Burger like hot lava. Touch down!

@BTNBrentYarina The Wis. Capitol building would make a sweet EZ design for the Badgers

@BTNBrentYarina @BigTenNetwork babe and Paul Bunyan in one, and the northern lights in the other. #Minnesota

@BTNBrentYarina The Nebraska state capitol building in one end zone, Ernie Chamber's hair in the other. Lincoln/Omaha represented.

@BTNBrentYarina not end zone, but I think it'd be interesting if Purdue could turn the hashes into railroad tracks