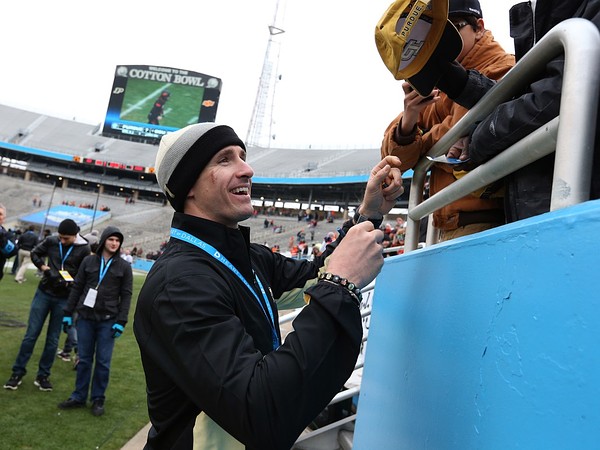 The Big Ten is home to one of sports' top 10 most influential pro athletes. That's the case, at least, according to the latest surveys from Nielsen and E-Poll Market Research that ranks the most influence among U.S. fans. For the curious parties, the study included each athlete's N-Score, Nielsen's measurement for a player's endorsement potential.

Purdue product and current New Orleans QB Drew Brees lands at No. 6 on the list, just behind Peyton Manning and ahead of names like Aaron Rodgers and LeBron James.

Here's what the piece says about Brees:

Influential: 21%
Awareness: 31%
N-Score: 180Riding a long time rep as a good QB and a good guy. Brees will always be remembered as the one who led post-Katrina New Orleans to its first Super Bowl title.

Not only is Brees known for leading the Saints to Super Bowl XLIV, he's the NFL's all-time single-season passing yards leader (5,476), the game's fastest to reach 40,000 passing yards, and the record-holder for most consecutive games with a touchdown pass (54).

Former Michigan student/volunteer assistant and Olympic star Michael Phelps came in at No. 2, behind only Tim Tebow. Yes, that Tim Tebow, the one who is unemployed.