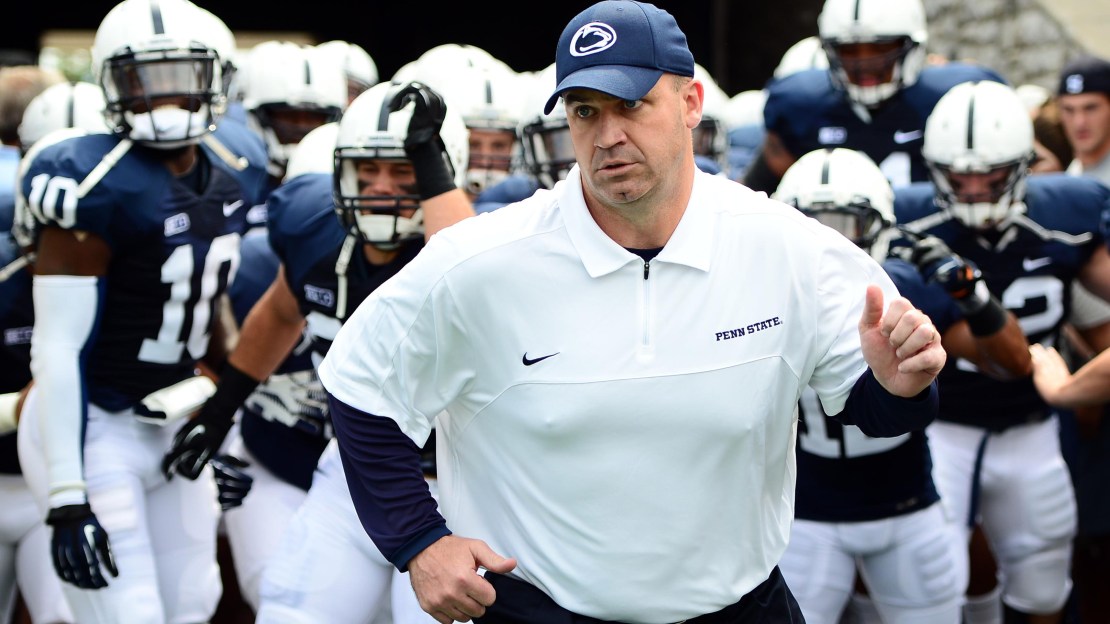 According to Audrey Snyder of the Harrisburg Patriot-News, Penn State must remain at 65 scholarships through the 2017-18 season and will have to jump to 85 scholarships in 2018-19. Getting back up to 85 will present its own set of challenges. Offering scholarships to junior walk-ons could be part of the plan.

I?ll just say this: O?Brien is gonna earn his money, as some lean days appear to be on the horizon. How can Penn State compete over a 12-game season with just 65 scholarships?

Speaking of Penn State, it continues to push for a game in Ireland.

?You know, I wouldn't say we're, like, right there but I think we're getting there," said O'Brien on a Penn State caravan stop. "I'm pretty positive about it, you know what I mean? But I wouldn't say it that it'll be announced (Friday)."

Think of it as a bowl game. Penn State should try to schedule some type of exotic game each year to serve as a de facto bowl. Heck, a game in Ireland would be better than 95 percent of the bowls, anyway.

During the spring game last Saturday, Iowa?s offense ran no-huddle-something it did all spring, in fact. Get used to the quick pace. It?s here to stay, as the Hawkeyes look to breathe life into what was a lifeless offense during a moribund 2012.

Rick Brown of HawkCentral.com notes Iowa averaged just 19.3 points last season, the team?s lowest average since 2007. The 310.4 yards per game were the fewest since 2000. The number that really stuck out to Iowa offensive coordinator Davis was 66, Iowa?s average number of plays per game.

?One of the things we felt, after evaluating all kinds of things in the offseason, was we needed more snaps,? Davis said at a booster club meeting this week.

So the no-huddle attack was incorporated into all 15 spring practices. There still will be the ability to huddle at times, Davis said, and the no-huddle approach doesn?t mean the end of the running game. This is gonna be fun, I think. Hey, it?s worth a shot.

As for picking a starting quarterback, Davis says to expect that 10 days before the Aug. 31 opener.

Check out this video of Nebraska football players prepping to go through ?The Program,? a leadership and team-building exercise. Whatcha got, fellas?

USAToday has a preseason All-American hoop team out already. And, Michigan State?s Gary Harris and Adreian Payne are on it.

Harris is on the second team; Payne the third team. Other Big Ten players who earned recognition included first-team pick Mitch McGary of Michigan, second-team selection Aaron Craft of Ohio State and honorable mention picks Yogi Ferrell (Indiana) and Glenn Robinson III (Michigan). Not so sure Ferrell deserves mention just yet. I still can?t get over the fact he didn?t score a point in Indiana?s last two NCAA games. Is he REALLY a preseason All-American? C?mon.

On the subject of MSU, it?s apparently working on scheduling a game with Gonzaga. What?s not to love about this?

Fewer than 300 public season tickets remain available, and fewer than 200 student season tickets are left. The unofficial seating capacity for hoops is 15,147. There won?t be a nicer hoop facility in the Big Ten-or the nation.

The SEC announced plans to launch a TV network-where have we heard this before?-in August 2014 in partnership with ESPN. And ESPN honchos say the network will have national appeal in places like ? Nebraska. Really. You can?t make this stuff up, people.

My take: I wonder if Urban Meyer knows this?

Chad Ford bumps Trey Burke up to No. 5 on his board: "More and more GMs are getting on the Burke bandwagon as a potential No. 1 pick."

My take: Trey Burke the No. 1 pick in the draft? Why not? It?s all about the guards at every level of basketball.

I see Mitch McGary on most national media's early first team All-America …. but most locals see Gary Harris as the B1G's best player.

My take: I agree. I think the Mitch McGary hype machine is working overtime. In fact, there is now a medical diagnosis called: ?Mitch McGary fatigue.? I have it.

Ferentz at Newton I-Club: Hopefully 4-8 is as rare as May snow. #hawkeyes

My take: For Kirk Ferentz?s sake, I hope he?s correct.

Congrats to Brad Banks that he is being inducted in UI Athletics Hall of Fame. And to think he did it despite starting just one season.

My take: He was a special player. Who can forget that 2002 season? Banks could have won the Heisman that season.

UCLA, Missouri, Northwestern and Nevada will play in the Las Vegas Invitational on Nov. 29-30. Have no clue if that's been out there yet.