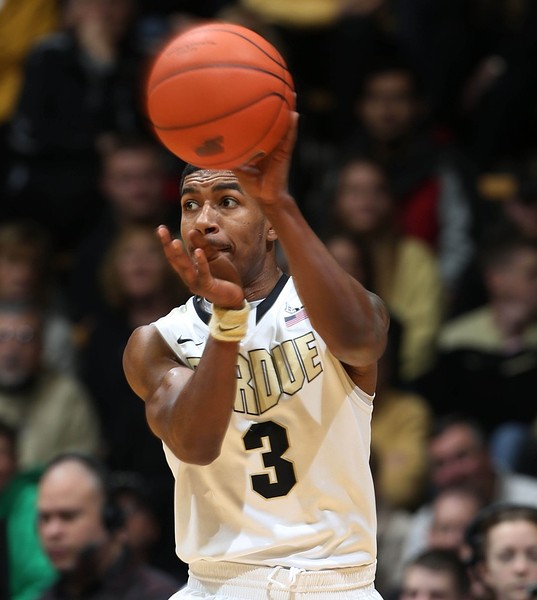 As we still await Adreian Payne's NBA draft decision, I thought it would be fun to take another way-too-early look ahead to the 2013-14 season. This time, I'll do it in prediction form, offering five things I'm confident about in 2013-14. See all five in this post. Have a prediction of your own? Feel free to leave it as a comment.

1. Ronnie Johnson, not Yogi Ferrell, will be best point guard in Indiana – No disrespect to Ferrell, whose role is certain to increase in the wake of Indiana losing Jordan Hulls, Victor Oladipo, Christian Watford and Cody Zeller. Instead, Johnson is just that good, to the point that he could give Aaron Craft and Tim Frazier a run for their money when it comes to the Big Ten's top point guard. Quick as a hiccup and an absolute blur in transition, Johnson can distribute and get to the basket with ease. Give him an improved jump shot, which his game desperately lacks, and he's going to be scary good. Even if the stroke doesn't come this year, with brother Terone Johnson and classmates Rapheal Davis and A.J. Hammons at his disposal, Johnson may lead the Big Ten in assists.

2. Michigan State will win the Big Ten – We're still awaiting Adreian Payne's decision on whether he'll stay in school or enter the 2013 NBA Draft. Regardless of the outcome, the Spartans are the Big Ten favorite. Should Payne stay, a starting 5 of, say, Keith Appling, Denzel Valentine, Gary Harris, Branden Dawson and Payne is hard not to love. Should Payne leave, there's still depth in East Lansing and the departure would open the door for Matt Costello and other talented youngsters. Lost in all the starpower Michigan State returns, Dawson also would be two years removed from ACL surgery. The junior-to-be didn't show signs of rust early in the season, but as the year wore on, he struggled mightily on offense.

3. Penn State will be Big Ten's most improved team – I've been on the 2013-14 Penn State bandwagon since late February, and even though the Nittany Lions went 2-16 in the Big Ten, things are looking up in University Park, Pa. A .500 conference clip, or maybe better, isn't out of the equation for this team. Everything, of course, rides on Tim Frazier's surgically repaired Achilles' tendon. If the point guard can return to his 2011-12 level AND stay healthy the entire season, Penn State should play some kind of postseason ball. Frazier's return is doubly important to his team, because not only is he one of the Big Ten's elite talents, he makes his teammates better. No question, D.J. Newbill and Jermaine Marshall, the Big Ten's leading returning scorers, will become more efficient and better all-around players due to Frazier's presence. He'll also make things easier for forward Ross Travis.

4. Iowa will be a legit Big Ten title contender – Why should you believe in the Hawkeyes? There are many reasons, actually. For starters, they've improved their win total by seven games in each of the past two seasons under Fran McCaffery (11 wins in 2010-11 to 18 in 2011-12 to 25 this past year). In addition, they're a talented young team that returns all but one player (Eric May) from a squad that went 25-13, including 9-9 in the rugged Big Ten, and advanced to the NIT title game. Also, in Devyn Marble and Aaron White, Iowa features one of the conference's better duos. Finally, let's not forget, six of Iowa's nine Big Ten defeats came by four points or fewer. This is a team that's not far away from figuring it out.

5. LaQuinton Ross will break out, become a star – It's no easy task to fill Deshaun Thomas' shoes, but Ross has the game to do just that. The athletic and much-pubbed Buckeye finally found his groove during Ohio State's postseason run, which included the Big Ten tourney title and an Elite Eight berth. Ross struggled to get consistent minutes most of the 2012-13 season, be it the result of poor/lazy defense or not blocking out on rebounds. But Thad Matta finally turned him loose down the stretch, and it offered a glimpse into what we can expect in the future. Here's what we learned: Ross is a silky smooth scorer who isn't afraid to hoist any shot – even game-winners in the NCAA tourney – and who will still have occasional mixups. But those issues can be hidden on this team, thanks to the defensive prowess of Aaron Craft, Shannon Scott, Lenzelle Smith and Amir Williams.