Gopher product Decker, fiance to be on reality show 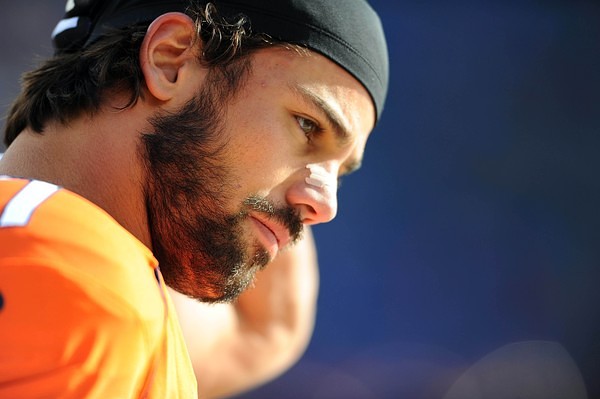 Eric Decker's come a long way since being an unheralded high school recruit. First, he rewrote the  Minnesota receiving record book. Next, he became one of the NFL's top receivers – his 12 touchdown receptions in 2012 were one off the league lead. This summer, Decker will add reality star to his name. The former Gopher and his fiance, Jessie James, are getting an E! reality show called Love and Other Contact Sports: Eric and Jessie.

Here's what HollywoodReporter.com has to say about the show:

Love and Other Contact Sports: Eric and Jessie (Late summer 2013)
From Khloé & Lamar to Kendra & Hank, E! has followed the romantic celebrity relationships of popular athletes and their gorgeous companions for years. The new Love and Other Contact Sports franchise will take viewers inside the confines of even more celebrity/athlete romances starting with country/pop singer Jessie James and her fiancé, Denver Broncos wide receiver Eric Decker whose wedding is quickly approaching. The series will chronicle the sexy young couple?s road to the altar as they juggle careers, relationships, family and more. Currently residing in their Denver dream home, they share an ambition to succeed, a charmingly fun and unfiltered outlook on life, and most of all, a red-hot attraction for each other. Produced by Shed Media U.S.

Whether the show is a success or an absolute dud, one thing's for sure: Decker's teammates will tease him plenty for doing this. It's a guarantee.

This is the same guy who future NFL Hall of Famer Peyton Manning just pranked after all.

Either way, it's good to be Eric Decker right now.

Check out our recent sitdown with Decker: