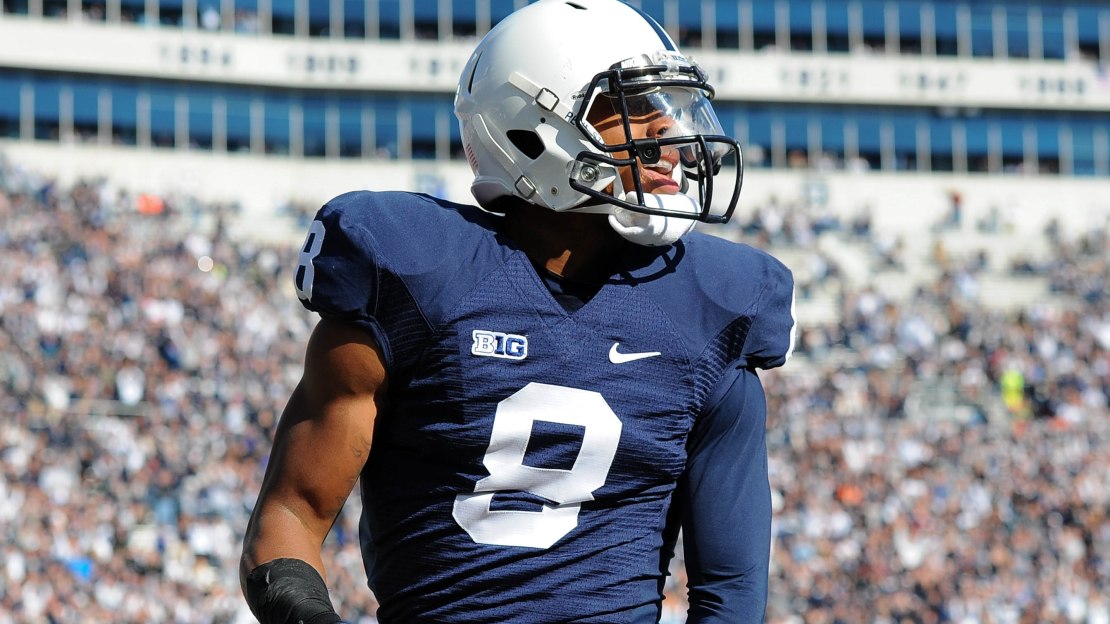 There are a lot of things to like about an Ohio State offense led by QB Braxton Miller. But the Buckeye offense will be even better if some big-play receivers step up. Could Michael Thomas be one of those guys? Let's start links here.

He graduated high school early last year and was a spring star with 12 catches. But he had only three catches during the season. Thomas and others need to make wideout a spot of strength for this Ohio State offense to really soar.

GO TO GALLON: Michigan understands the need for receivers with Roy Roundtree gone. Could Jeremy Gallon be a guy for a Wolverines attack that is in transition with Denard Robinson gone?

FIRST PITCH BLUES: Speaking of Robinson, did you see his one-hop ceremonial first pitch at a recent Detroit Tigers game? It wasn?t pretty.

NEW FACES OF NITTANY LIONS: Penn State fans won?t soon forget the 2012 season, when the Nittany Lions fought through long odds to post an 8-4 record. But many of the key players off that squad are gone-Michael Mauti, Jordan Hill, Matt McGloin et al. Who will be the new faces of the program? All the key names are right here.

Me? I love WR Allen Robinson and RB Zach Zwinak.

OLADIPO ON NBA: Victor Oladipo announced he is turning pro. No shock there. Watch this video of the Indiana great discussing his decision.

HE'S READY FOR THE ASSOCIATION: Bob Kravitz of the Indianapolis Star thinks Oladipo is ready for the NBA. I don?t think anyone will argue with that.

WHAT ABOUT CODY? Is Cody Zeller next to declare?

DECISIONS FOR WOLVERINES: And what will Michigan?s Mitch McGary and Glenn Robinson III do? Most feel Trey Burke and Tim Hardaway Jr., will go pro. But if McGary and Robinson bolt, it will be a shock and big blow to the Wolverines.

AND FOR PAYNE: Michigan State?s Adreian Payne also has a decision to make about his future: Will he turn pro or come back for his senior season? Graham Couch of the Lansing State Journal says the big fella has a lot to consider.

As of Tuesday, public sales for the new Pinnacle Bank Arena were at 10,355. That's a 49.7 percent increase from last season's 6,917 at the Devaney Center.

EARLY PREDICTIONS: USAToday has an early Top 25 out. Check it out; so does NBCSports.com.

LOVE FOR LOU: The great Loren Tate of the Champaign News-Gazette was happy to see Purdue?s Gene Keady get into the College Basketball Hall of Fame. But Tate just wishes former Illini coach Lou Henson was going in with him. Me, too.

Tate points out that Henson won 16 of 30 meetings vs. Keady and got to a Final Four, which Keady never did. Tate thinks maybe Henson?s exclusion is due to an NCAA investigation and myriad NCAA tourney flame-outs that have tainted Henson?s legacy. I think Henson eventually will get in.

ANOTHER HAWKEYES WEAPON: Remember the fuss kicked up by Wisconsin when Jarrod Uthoff wanted to transfer from the Badgers to Iowa? Sure you do. Bo Ryan finally relented after the incident created some bad publicity. Uthoff will be eligible next season for the Hawkeyes, giving them yet another weapon on what will be a loaded and talented Iowa squad.

SCHEYER ON COLLINS: Here is a fun look at new Northwestern coach Chris Collins through the eyes of former Duke guard Jon Scheyer, a Chicago-area player Collins recruited to Durham.

SO MUCH LIKE HIS DAD: Can Richard Pitino recruit as well as his dad? Listen to some St. Paul Pioneer-Press scribes discuss it in this podcast.

WHAT A SEASON: Here?s a look at the final USAToday hoops poll.

I've confirmed that #Nebrasketball has sold 10,355 season tickets for first year in @PinnacleArena. That's a 49% increase from last season.

My take: This is very impressive.

Indiana will have more potential first-round draft picks on its team next year. Expect draft announcements to be a regularity from here on.

My take: This speaks to the level at which Tom Crean is recruiting.

So are there odds on whether Spike gets a date with Kate or what?

My take: Slim and none.

My take: Yet another wristband from Tim Beckman. Hey, it?s worth a try.

Depending on number of Michigan guys leaving, MSU, Iowa and Purdue should make strides in next year's Big Ten race. OSU good as well.

My take: I think Michigan State and Ohio State will be the favorites when it?s all said and done.

Don't know what Zeller is gonna do, but my educated guess is he's gonna go to the NBA. Again, just speculation on my part.

With 4 scholarships available for the 2013 class, Pitino can really change the look of next season's team depending on who he brings in.

My take: How many top-quality players are left at this point? He may have to focus on Classes of 2014 and 2015.