There was nothing keeping Oladipo at Indiana 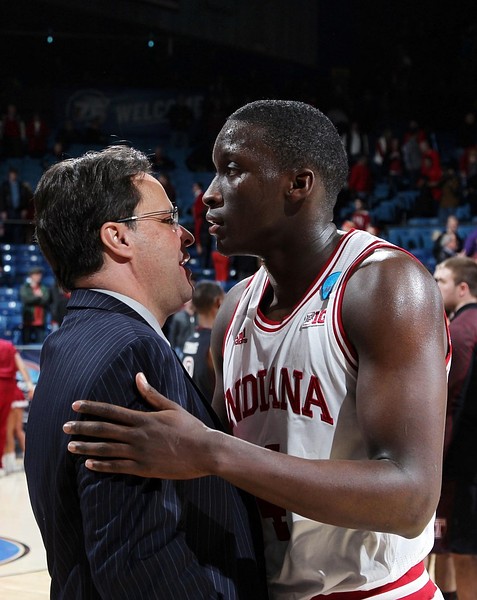 When it came down to it, there was little keeping Victor Oladipo at Indiana. Think about it, the junior graduates next month, is fresh off a breakout season (Big Ten title, first-team AP All-America, unanimous first-team All-Big Ten, Big Ten Defensive Player of the Year), and is a projected lottery pick.

Add it all up, and Oladipo's announcement Tuesday to enter the 2013 NBA Draft is about as surprising as another sellout at Assembly Hall.

Few, if any, players improved as much as Oladipo this season. He went from an inconsistent, turnover-prone athlete who made his mark on defense to, perhaps, the Big Ten's elite all-around player. All in one short offseason.

[RELATED: Tom Dienhart wonders who's the next to go. ]

And he has all of the endless and well-documented hours at Cook Hall to thank for it. A shaky outside shooter his first two seasons, Oladipo worked on his range and turned into a more dynamic all-around player. The results were eye-popping, as the guard shot a ridiculous 60 percent. The improved range was alarming, really. Oladipo made just 18 3-pointers in his first two seasons, and at a 24-percent clip; this year, he hit 30 treys and shot 44 percent from distance.

"The one thing that stood out the most was the shooting," Tom Crean said. "I could coach 30 more years – I won't – but we won't see a guy improve like that."

Best of all: Oladipo's work on the offensive end didn't affect his defense, evidenced by the aforementioned Big Ten Defensive Player of the Year. The junior's 2.2 steals per game paced the Big Ten, plus he averaged 0.8 blocks and 3.8 defensive boards.

In the end, Oladipo's improved offensive game transformed him from a fringe pro prospect to one of the the top players in the draft class. It also had talking heads like Dick Vitale comparing his game to some guy named Michael Jordan.

This a strike-while-the-iron-is-hot kind of world, and Oladipo's stock can't get much higher. Another year in Bloomington would be risky. Everybody knows that.

Here's where a few NBA experts have Oladipo being drafted:

And a look at Oladipo's career stats: