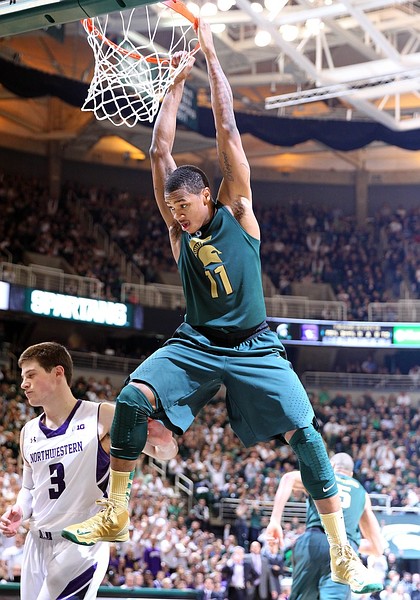 It's never too early to look ahead to next season, right? Actually, yes, the day after the completion of one season is entirely too early to start analyzing the next. But even if we don't know which stars will return and which ones will go pro, it's fun to consider what next season may bring. See my super-early 2013-14 power rankings in this post. And once all the NBA decision are made, I'll update this list.

[ RELATED: How did I do with last year's super-early rankings? ]

No. 1: Michigan State – If Gary Harris and Adreian Payne stay in school, the Spartans will have an incredibly talented and deep nucleus that should make Michigan State one of the favorites to win the NCAA title.

No. 3: Michigan – Much of this ranking depends on what Trey Burke, Tim Hardaway Jr., Mitch McGary and Glenn Robinson III decide to do. If Burke and at least one other guy leave, the Wolverines will drop.

No. 4: Iowa – The Hawkeyes return their entire starting 5, headlined by big-time scorer Devyn Marble, plus they add Wisconsin transfer Jarrod Uthoff. No doubt about it, this program is on the rise.

No. 5: Wisconsin – So what if Wisconsin loses its entire frontline? Bo Ryan is still the coach, the Badgers always defend, and the team returns Ben Brust, Sam Dekker and Josh Gasser, among others.

No. 6: Purdue – A.J. Hammons, Ronnie Johnson and Terone Johnson have the ability to become one of the Big Ten's better trios. Consistency and depth could be an issue again, however.

No. 7: Indiana – Assuming Cody Zeller joins Victor Oladipo in the NBA, Indiana will be without its four leading scorers from this year. How will Yogi Ferrell and Will Sheehey thrive in primary roles?

No. 8: Penn State – Add a fully recovered Tim Frazier to the backcourt of D.J. Newbill and Jermaine Marshall, and the Nittany Lions are likely to be the Big Ten's most improved team.

No. 9: Northwestern – Should Drew Crawford elect to leave, the Wildcats will flirt with the Big Ten basement. If Crawford joins Dave Sobolewski, JerShon Cobb and Alex Olah, though, Northwestern has the makings of something.

No. 10. Nebraska – Get to know this name: Shavon Shields. The sophomore-to-be had a fantastic freshman campaign, and he's one of the biggest reasons (Tim Miles and Pinnacle Bank Arena, the others) Nebraska fans are excited about basketball.

No. 11. Illinois – With Brandon Paul and D.J. Richardson gone, it'll be interesting to see where the scoring comes from. Will it be transfer Rayvonte Rice, who averaged 15.4 points in two seasons at Drake? The Illini better hope so.

No. 12: Minnesota – The Gophers have talent in the backcourt, but they aren't the greatest shooters, and with forwards Trevor Mbakwe and Rodney Williams no longer around to grab second chances, there will be struggles.