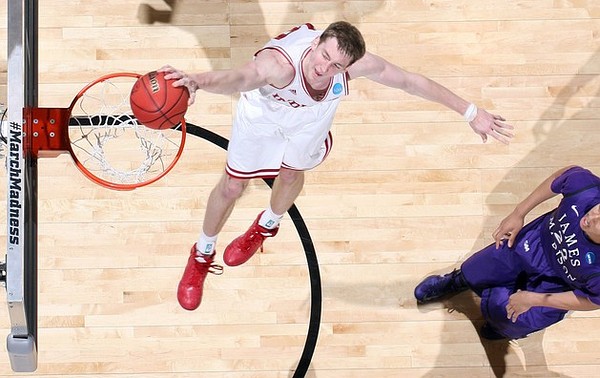 Ohio State junior Deshaun Thomas announced Friday that he will enter the 2013 NBA Draft. What will the Big Ten's other top pro prospects do? You know, underclassmen like Trey Burke, Cody Zeller and Adreian Payne, among others? I asked draft analyst Ed Isaacson for his thoughts. Follow Isaacson on Twitter (@nbadraftblog) and check out his blog.

The 2013 NBA Draft is Thursday, June 27. The deadline to submit a name to the NBA draft is Wednesday, and the deadline to withdraw and retain college eligibility is Tuesday, April 16.

BTN.com: How much do you think this year?s weak draft class will impact Big Ten players? decisions?
Ed Isaacson: I think it's wrong to characterize the whole draft class as weak; it's just not as strong in the Top 5 or 10. Once you get into the mid-first round, all the way through the end of the draft, it is a very deep class. So if you view it that way, it may be worth the risk if you could find yourself in the lottery this year, but not a great risk if you were hoping to get in the first round or drafted at all. Each player's decision is different, but I do think a few players may see an opportunity to go higher and try to jump on it.

BTN.com: When you watched the Big Ten this season, who displayed the most NBA-ready game?
Ed Isaacson: I loved Trey Burke's ability to run his offense and make decisions off the pick-and-roll. He could work in many NBA offenses right now. Deshaun Thomas' scoring ability is very similar to many NBA players. Victor Oladipo could be a very good defender right away at the NBA level. Three different players for three different reasons.

BTN.com: Which Big Ten player helped his stock the most this season, and which hurt his stock the most?
Ed Isaacson: No player made the strides in one season that Trey Burke made. From leadership skills to decision-making to defense, Burke stepped it up on all ends. Close behind him would be Victor Oladipo. He made smaller, but necessary, improvements, and came up big when he needed to. It really is tough to say that someone "hurt" their stock. Most players show exactly what you expected. I would say that I expected more out of Tim Hardaway Jr. this season, especially showing some consistency as a junior. Also, I was hoping Deshaun Thomas would show some new things this season, but he was largely the same player. They are both still good players, they just didn't make the improvement they could have.

BTN.com: Of the players who have been rumored to possibly make the leap, who would benefit the most from another year in school?
Ed Isaacson: I think another year in school would do Cody Zeller a lot of good. Skill-wise, he is far ahead of other college big men, but I think there is still work to do physically. He would be fine if he left, but I think he would be better if he spent the year working on the physical aspect of the game.

BTN.com: Fast forward, say, 10 years - which current Big Ten player will be the best pro, and why?
Ed Isaacson: It is so tough to teach the vision and decision-making ability that Trey Burke has and I think he will have a long, prosperous career, but I think if Glenn Robinson III puts the athleticism, skills and maturity together, he can be a big-time NBA player.

BTN.com: Finally, let?s give the seniors some love. Will we see any Big Ten senior drafted this year?
Ed Isaacson: I definitely think we will see Brandon Paul get drafted. He does so many things well, and the mistakes he makes will hopefully be cut down coming off the bench for stints and doing what he does well. Trevor Mbakwe looked good coming back off the knee injury and showed a lot of his old explosiveness around the basket. Combine that with his rebounding ability and he will certainly be in position to be drafted. Jared Berggren has a lot of good qualities, especially on the defensive end, but he is probably a borderline draftee. However, I wouldn't count out that he works his way into the NBA at some point in the future.

INDIANA
Victor Oladipo, Jr., G
Why he should stay: Oladipo had the opportunity to show what he could do, especially on defense, but his offensive game still needs a lot of work.
Why he should leave: From a defensive standpoint, he is ready to play in the NBA, and if he can play in an up-tempo system he can succeed quickly.
Prediction: Oladipo will leave for NBA

Cody Zeller, Soph., F/C
Why he should stay: Zeller still needs to work on being more physical on both ends of the court. He has to find a way to take the aggression he had in his biggest games and find a way to bring that every night.
Why he should leave: Zeller has the skill necessary to play at the NBA level and he may get more time to focus and train on the physical part out of a school environment.
Prediction: Zeller will leave for NBA

MICHIGAN
Trey Burke, Soph., G
Why he should stay: There are some tweaks he can still make to his game, especially being able to add a short jumper/floater and tightening up on the ball on the defensive end
Why he should leave: I think in whole, he is ready to contribute to an NBA team now. He can pick up the skills he needs along the way
Prediction: Burke will leave for NBA

Tim Hardaway Jr., Jr., G
Why he should stay: Consistency. Hardaway Jr. didn't show the improvement he should have over the last year. Become a better ball defender and work on getting to the basket more.
Why he should leave: He can score, and he has made some big baskets this year. May be better served developing more at the next level.
Prediction: Hardaway Jr. will leave for NBA

Mitch McGary, Fr., F
Why he should stay: While McGary came on late in the year, he is still very raw in many aspects of the game. He should use the momentum from the end of this season to have a big sophomore year.
Why he should leave: I don't believe it, but strike when the iron is hot. McGary's name and game has been talked about non-stop for 3 weeks. Could find a good opportunity at the end of the 1st round.
Prediction: McGary returns to Michigan.

Glenn Robinson III, Fr., F
Why he should stay: Robinson III has the physical tools of an NBA player, but not as many of the skills you would like. He has an opportunity to take over the team the next season and show what he can do.
Why he should leave: He is an NBA body and athleticism, and his head may not be completely in the college game. If he thinks he can rise to the challenge, then he may go for it.
Prediction: Robinson III returns to Michigan

MICHIGAN STATE
Gary Harris, Fr., G
Why he should stay: Harris had a typical freshman season, highs and lows, and not a lot of consistency. He has a chance to be a special talent, but he needs to work on defense and work on creating his own shot on offense.
Why he should leave: Like I said, he could be a special talent. He has a strong body and close to an NBA-ready offensive game.
Prediction: Harris returns to Michigan State

Adreian Payne, Jr., F/C
Why he should stay: Coach Izzo has done a good job developing various parts to Payne's game, but he still has some work to do. If Payne puts it all together, he can be one of the best in college basketball next season.
Why he should leave: Teams will love his athleticism and length, and Payne may think that the NBA will help him mature and put all the pieces to his game together.
Prediction: Payne returns to Michigan State

OHIO STATE
LaQuinton Ross, Soph, F
Why he should stay: Ross has shown a glimmer what he can do in the NCAA Tournament, but he just isn't ready for the NBA. Come back, show it consistently, and next year could be a big one.
Why he should leave: As I mentioned with McGary, people saw what Ross is capable of over the past few weeks, so he may feel it's worth a shot to go for the NBA.
Prediction: Ross returns to Ohio State

Ohio State junior Deshaun Thomas already announced he was entering the 2013 NBA Draft. Here's Isaacson's review on what Thomas should do:

Deshaun Thomas, Jr., F
Why he should stay: Thomas is not a very good defender, though he has improved, and it's tough to see who he could guard in the NBA. If he stays and works hard at that, the NBA will want him all the more.
Why he should leave: Thomas is one of the best scorers in the nation, capable of scoring in a variety of ways around the court. I have no doubt he can step in and provide scoring in the NBA very quickly.
Prediction: Thomas will leave for NBA