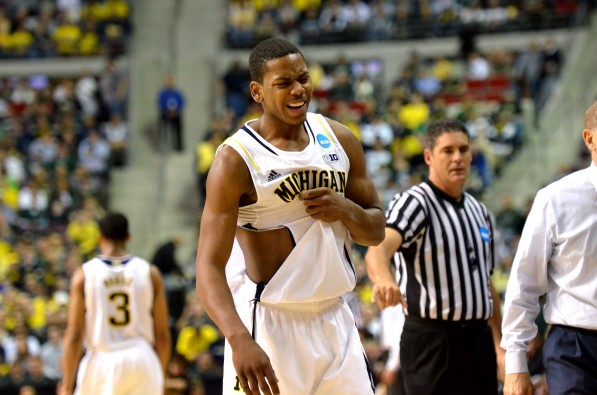 It's been a tough season for Michigan basketball jerseys. In mid-January, Trey Burke and Jordan Morgan's jerseys ripped at Minnesota, causing the Wolverines to wear last year's road uni the rest of the season. Another Michigan jersey met its demise in Saturday's NCAA tourney victory over VCU. This time, it was Glenn Robinson III's home jersey.

Like Burke in the aforementioned game at Minnesota, Robinson III donned Michigan's emergency No. 12 the rest of the game.

So, what does this mean for Michigan's home threads going forward – assuming it's the higher seed again? Here's what adidas emailed:

"We have plenty of Michigan uniforms including the home white jerseys they wore today. There won't be any issues."

That's good. My recommendation, should Michigan find itself as the higher seed again in the tournament: Rock the throwback from earlier this season. It's a sharper look.