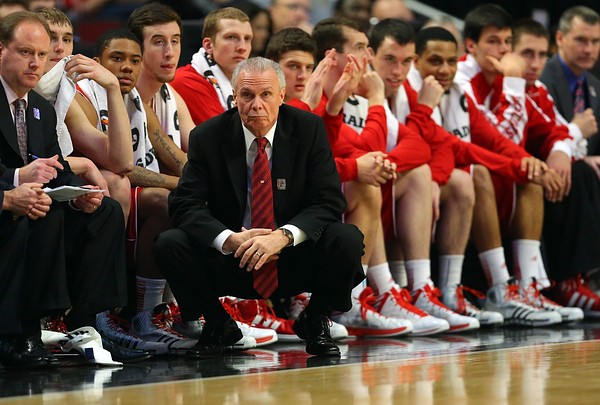 The last time Indiana beat Bo Ryan and Wisconsin, the calendar had just flipped to 2007. The date, to be exact, was Jan. 31, 2007. Since then, the Badgers have won 12 consecutive over the Hoosiers, the latest coming in Saturday's Big Ten tourney semifinals.

For some perspective, here's how Indiana has fared against the Big Ten's perennial powers since this run of futility began: vs. Michigan State (6-8); vs. Ohio State (5-10).

All three teams, of course, had the advantage of beating up on the Hoosiers for three seasons (2009-11) following the Kelvin Sampson NCAA sanctions, but Wisconsin's success is beyond explanation. "There are just things in this game where no matter how you try to explain them, they defy explanation or reason," Ryan said. "And other things are because the coach is so obstinate he's only going to accept certain things. So maybe it's a combination of that."

In Saturday's victory, Wisconsin countered every Indiana run and, for the most part, seemed to be in control of the game. The Badgers, per usual in this series, also received timely buckets from role players, such as George Marshall. And, as always, they played great defense.

"I think we played great defense," said Ryan Evans, who swatted a career-high four shots. "You know, that forces them to take better shots, or if they want to go and take bad shots and play fast, that's on them. But I think it's the defense, defensive side of the ball."

That's what the Badgers do, though. It's nothing new, and it's not just what they do vs. Indiana.

"They are a very good team, extremely well coached, disciplined, great staffs, inside-outside scoring, great balance, and just an all-around great team," Tom Crean said. "They are an excellent team and have been for a long, long time. As long as he's (Ryan's) the coach there, they will be."

Ryan knows his success against Indiana isn't all about him.

"You've got to keep working it, and when you're surrounded with good people, it sure makes it a lot easier," Ryan said. "It's never easy, just makes it easier."