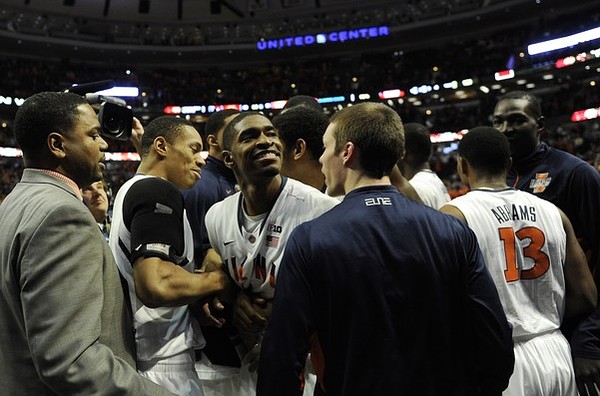 Thursday's opening day of the Big Ten tourney featured a game-winning buzzer-beater (Illinois over Minnesota) and an upset (No. 10 Nebraska over No. 7 Purdue). Catch up on the best performances, numbers and highlights from the opening day of action at the United Center in this post.

DAY 1 STARS
1. Brandon Paul, Illinois – 10-16, 25 points, 5 rebounds, 2 assists, 2 steals, 0 turnovers. On a day where neither team could find the bottom of the bucket, Paul was one of the only players to have success in Illinois' win over Minnesota. He accounted for 49 percent of Illinois' 51 points, and his 10 field goals were two more than rest of the Illini combined. Paul's game-wining buzzer-beater was gravy. So, too, were the zero turnovers.

2. Trey Burke, Michigan – 7-15, 21 points, 2 rebounds, 3 assists, 3 blocks. The Big Ten Player of the Year reached the 20-point plateau for the sixth time in the last seven games and guided an offense that committed just four turnovers. This guy is a machine who can't be stopped, whether it's in the scoring or distributing department.

4. Melsahn Basabe, Iowa – 3-9, 10 points, 12 rebounds, 6 blocks. It wasn't the cleanest game, seeing as how Basabe missed a late breakaway slam and went 4-of-8 from the free-throw line, but it still was a solid all-around game for the Iowa junior. Basabe dominated the glass – he had seven in the opening four-plus minutes – on his way pulling down 12 boards, his second consecutive double-digit rebounding game. Oh, and he also swatted six shots.

DAY 1 NUMBERS
0: Brandon Paul, who averaged 2.8 turnovers per game entering Thursday, tallied zero turnovers for just the third time this season.
1: Nebraska registered win No. 1 in the Big Ten tourney. It's 1-1, after losing to Purdue in opening round last season, its first in the Big Ten.
4: Michigan tied a Big Ten tourney record for fewest turnovers in a game (4), tying Purdue (2011), Indiana (2003) and Wisconsin (2000).
5: Michigan had five players score in double figures (Trey Burke 21, Tim Hardaway Jr. 15, Nik Stauskas 15, Jon Horford 11, Mitch McGary 10); Brandon Ubel totaled a career-high tying five assists in Nebraska's win over Purdue.
7: Michigan won its opening Big Ten tourney game for the seventh straight season; Melsahn Basabe had seven rebounds in first four-plus minutes against Northwestern.
10: D.J. Newbill tied a Penn State record in Big Ten tournament play with 10 field goals on his way to scoring a team-high 20 points.
10 & 10: Michigan reserve Mitch McGary, the owner of one double-double entering Thursday, ended the first half against Penn State with a 10-point, 10-rebound double-double.
11: Jon Horford scored 11 points in Michigan's win over Penn State, marking his highest career total vs. any Big Ten team.
12:36: Northwestern was held scoreless until Nikola Cerina, of all players, hit a jumper with 12:36 remaining in the first half.
16-1: Minnesota lost for the first time this season when it led at the 5-minute mark, putting its record at 16-1 in such situations.
32.1: Illinois, which had one win on the season when it hit 35 percent or less from the field (Norfolk State, Dec. 11) shot 32.1 percent in its buzzer-beating win over Minnesota.
49%: Brandon Paul's 25 points accounted for 49 percent of Illinois' 51 points.

DAY 1 HIGHLIGHTS
Other than Paul's game-winner above, it's this Eric May slam:

And this Trevor Mbakwe left-handed putback:

DAY 1 QUOTES
"Looking back on it, I probably should have played them both." – Tubby Smith, on keeping Austin Hollins and Trevor Mbakwe, both with two fouls, on the bench during an extended Illinois first-half run.

"That goes to show that, hey, he's definitely going to be a future captain on this team and that he has the ability to bring the spark to this team." – Trey Burke, on freshman reserve Mitch McGary, who provided a lift off the bench with a first-half double-double.

"Over the hump? I'll let you know when we get there next year." – Patrick Chambers, on whether Penn State's strong finish made him fell that the program was closer to getting over the hump