Did You See This? Hulls' emotional Senior Night speech 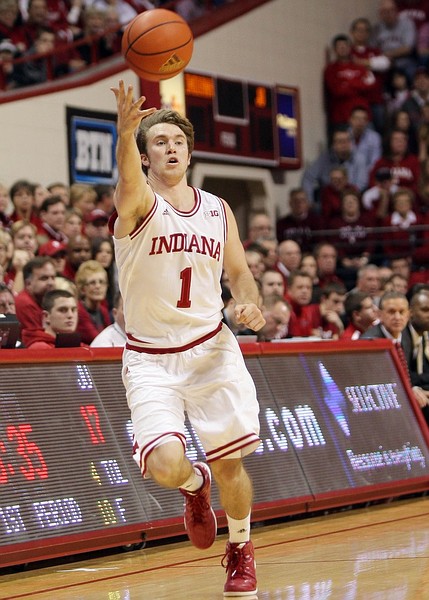 Jordan Hulls grew up a few miles from Indiana and his grandfather was an assistant on Bobby Knight's staff, so it was only fitting that he would wear the candy stripe pants one day. Four seasons of sweet shooting later, the hometown kid couldn't help but get emotional following his final game at Assembly Hall. Watch Hulls let the emotions flow throughout his memorable Senior Night speech Tuesday here.

[ RELATED: Watch all of our Indiana Senior Night video ]

Hulls warned the crowd that he would get choked up, though. He was right. The tears flowed as he thanked all the important people in his life, from his close-knit family to team managers. They continued as he called his sister, Kaila, his "best friend," which brought her to tears, as well, and when he talked about his late grandmother.

Not only was the speech 100 percent from the heart, it humanized Hulls. It also resulted in a standing ovation, no doubt aided by his closing remark: "Let's go get banner No. 6!"

Twitter took notice, to the point that "Jordan Hulls" was trending worldwide.

See some of the tweets below:

My God, Jordan Hulls. There's a guy who cares about college hoops.

Have to stay unbiased and all, but I'm not afraid to say Jordan Hulls is one of my all-time favorite players. #iubb

To me, Jordan Hulls represents all that's good about college hoops and specifically IU hoops. Very emotional in his speech.

This is pretty much exactly what a senior speech is supposed to be. This one won't be forgotten.

I've heard 15 years worth of these Senior speeches and I can't remember one quite this emotional.

Jordan Hulls is trending worldwide because of a senior night speech after an IU loss? That is impressive

Hulls breaking down in tears during his whole speech, and damn if he doesn't deserve to let it all hang out after all the work he's put in.

Jordy will go down as one of the greatest shooters in #iubb history. Same would be said if they ranked heart.